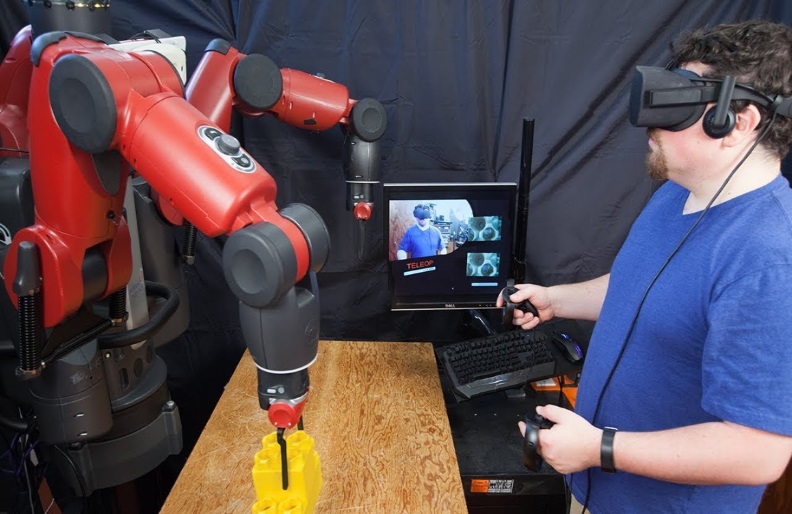 New research has shpwn that it’s becoming easier to teleoperate robots by using virtual reality. This has the aim of making it easier for factory workers to telecommute.

Technologists from the Massachusetts Institute of Technology have been working around the future direction of work, noting that many many manufacturing jobs require a physical presence to operate machinery. The researchers earlier posed themsleves a question: “what if such jobs could be done remotely?”

Using this as a research basis the technologists, working at the university’s Computer Science and Artificial Intelligence Laboratory, have now presented a virtual-reality system that lets a warehouse operative or construction worker to teleoperate a robot. This is via a standard Oculus Rift headset. The headset provides an immersive virtual reality expereince for the operator.

The newly developed system embeds the worker in a virtual reality control room, equipped with multiple sensor displays. This gives the impression that the person is inside the head of the robot. Then, through the use of gestures, the operative can match the movements to the robot in order to complete various tasks.

Philosophically the set-up mimics the “homunculus model of mind“. This is the idea that there is a tiny human inside our brains controlling our actions: viewing the images we see and understanding them for us. While this may seem like an arcane form of thinking (put forward by neuroscientists David Marr during the 1970s), in relation to how an operative could approach the action of controlling a robot through virtual reality this design approach seems to work.

The system was recently tested out using the advanced Baxter humanoid robot from Rethink Robotics. This took full advantage of what the researchers are terming a “cyber-physical” model. In other words, the user is separate from the robot: the user interacts with a virtual copy of the robot and the environment. Compared with other systems, the new approach was found to be better at grasping objects 95 percent of the time and 57 percent faster at doing tasks.

The output can be seen in the following video:

Commenting on this, lead researcher Dr. Jeffrey Lipton explains: “A system like this could eventually help humans supervise robots from a distance.”

He adds: “By teleoperating robots from home, blue-collar workers would be able to tele-commute and benefit from the IT revolution just as white-collars workers do now.”

The research has been presented at the IEEE/RSJ International Conference on Intelligent Robots and Systems (IROS), which took place in Vancouver, Canada during October 2017.

This article was originally published by DIGITAL JOURNAL.