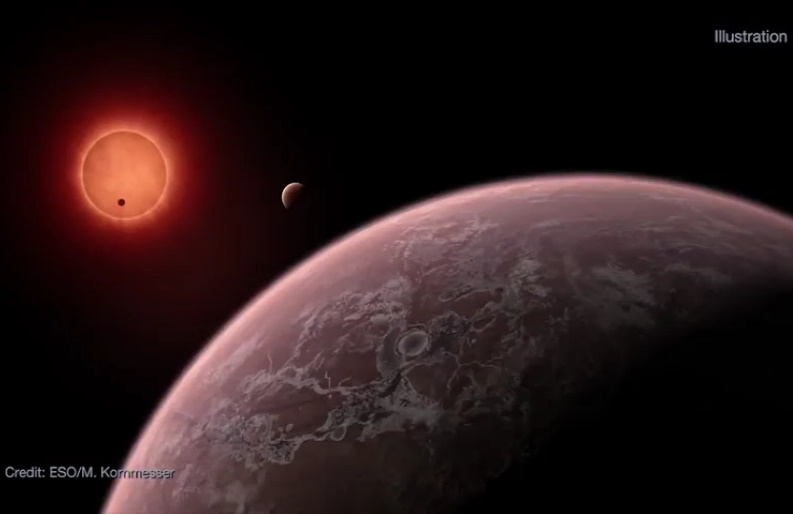 Scientists have redefined the conditions which could make an exoplanet potentially habitable, narrowing down the number of worlds that could become targets in the search for life beyond Earth.

For a study published in The Astrophysical Journal, a team of researchers used 3D climate models incorporating atmospheric chemistry to examine the habitability of planets around so-called M dwarf (or red dwarf stars)—which make up around 70 percent of all the stars in the universe.

The researchers say this is the first study to examine “3D chemistry” in order to understand how the radiation being emitted by a star heats or cools the atmospheres of rocky planets.

“For most of human history, the question of whether or not life exists elsewhere has belonged only within the philosophical realm,” Howard Chen, first author of the study from Northwestern University, said in a statement. “It’s only in recent years that we have had the modeling tools and observational technology to address this question.”

“Still, there are a lot of stars and planets out there, which means there are a lot of targets,” Daniel Horton, a senior author of the paper, added. “Our study can help limit the number of places we have to point our telescopes.”

For a planet to be able to host life as we know it, scientists think the presence of liquid water is key. This can only occur in what experts call the “habitable zone”—the region around a host star within which the conditions are right for liquid water to exist on the surface. This generally means being far away enough from the star that the water doesn’t vaporize from the heat, and close enough that it doesn’t freeze from the cold.

In the study, the team decided to focus on planets orbiting M dwarfs—a class of relatively cool and dim stars. These planets are considered some of the best places to look for life outside the solar system.

The difference in this study is that unlike previous research looking at the habitability of rocky exoplanets, the scientists combined climate modeling with atmospheric chemistry and photochemistry—the branch of chemistry concerned with the chemical effects of light—providing intriguing new results.

According to the team’s analysis, the amount of radiation that these stars give off is crucial to whether or not the planets orbiting it may be habitable. For example, they found that planets which orbit stars emitting lots of ultraviolet radiation are likely to lose significant amounts of water due to vaporization.

Furthermore, they discovered that many planets that lie in the habitable zones of their stars may actually not be able to sustain life due to the fact that they have thin ozone layers.

This means that some planets which were previously thought to be habitable may actually be receiving too much UV radiation to sustain complex life on the surface.

“3D photochemistry plays a huge role because it provides heating or cooling, which can affect the thermodynamics and perhaps the atmospheric composition of a planetary system,” Chen said. “These kinds of models have not really been used at all in the exoplanet literature studying rocky planets because they are so computationally expensive. Other photochemical models studying much larger planets, such as gas giants and hot Jupiters, already show that one cannot neglect chemistry when investigating climate.”

“It has also been difficult to adapt these models because they were originally designed for Earth-based conditions,” Horton said. “To modify the boundary conditions and still have the models run successfully has been challenging.”

Read more: This exoplanet challenges our understanding of planet formation

The researchers say that the findings could have significant implications in the search for life beyond the Earth, helping scientists to narrow down targets that could be explored further by upcoming technologies such as the James Webb Telescope—scheduled for launch in 2021. This telescope will have the power to reveal intricate details about the properties of exoplanets.

“‘Are we alone?’ is one of the biggest unanswered questions,” Chen said. “If we can predict which planets are most likely to host life, then we might get that much closer to answering it within our lifetimes.”