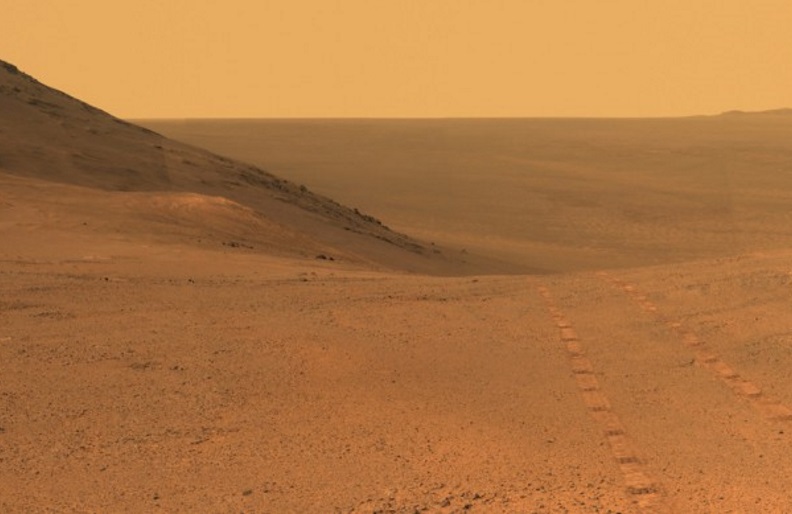 We are one step closer to discovering if there is life on Mars. A new after a study has suggested that there might be enough oxygen in the briny liquid that sits nears the planet’s surface to support microbial life.

Oxygen levels are yet to be tested, but the hypothesis allows more thinking on human colonization. Much cell life on Earth uses the process of aerobic respiration, where cells take in oxygen and break it down to produce energy fuel their metabolism.

Time to change the hypothesis about Martian Life

The existence of life on Mars was once thought unlikely as the deficient levels of atmospheric oxygen on Mars had ruled out the possibility of aerobic respiration. “Our work is calling for a complete revision for how we think about the potential for life on Mars, and the work oxygen can do, implying that if life ever existed on Mars it might have been breathing oxygen,” says lead study author Vlada Stamenkovic, a researcher at NASA’s Jet Propulsion Laboratory in California.

“We have the potential now to understand the current habitability.” Despite being a freeze-dried desert, Mars has a lot of subsurface water ice.

There are even small amounts of liquid water in the form known as a brine. A brine is a liquid with super high salt content, that lower the freezing temperature of the water so that it can stay liquid in Mars freezing atmosphere.

The new study looked at these brines and modeled the way oxygen dissolves in brines with a model of the Martian climate. The results show that it is possible that just below the surface of these salty water reserves there might be just enough oxygen to support life. The study goes on to suggest that the brines might contain higher concentrations of oxygen than were present even on the early Earth.

The study examined Mars tilt towards the sun and by looking at changes in the planet-spanning from 20 million years in the past to 10 million years in the future have shown there is a possibility that the water absorbed and retained oxygen from the atmosphere. While the oxygen levels have not been tested, the theory is backed up discoveries made by the Mars Rover which has discovered rocks high in the element manganese, which likely required significant oxygen to form.

“Manganese deposition on Earth is really closely associated with life, both indirectly and directly,” says Nina Lanza, a planetary geologist at Los Alamos National Research Laboratory in New Mexico. These rock findings suggest that Mars had more atmospheric oxygen in the past than it does today.

Scientists are still debating how and when the oxygen may have entered the water. Some believe it was possibly absorbed via the atmosphere others believe the small brines are the final result of larger seas. Work will continue on the study of oxygen levels in liquid water on Mars. The study appears in the October 22 edition of Nature Geoscience.