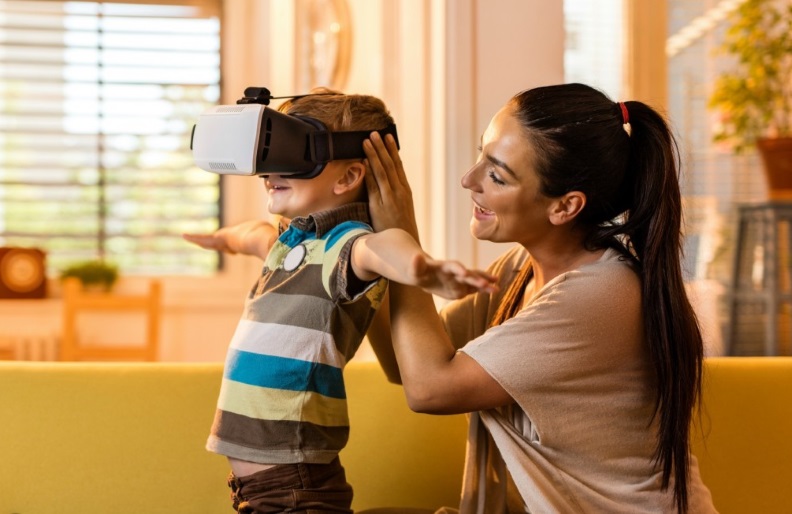 Over a million VR headseats were shipped in 2017, and statistics show that number is expected to rise in 2018 as more products become available, CBS affiliate WTVF reports.

Virtual reality seems to be an exciting prospect, but buyers should be aware of the potential dangers that come with the technology.

One of the more obvious safety hazards that virtual reality technology presents is the space that consumers use them in.

“While wearing the product’s headset you are blind to the world around you,” read the safety information page for HTC’s Vive. “Do not rely on the product’s chaperone system for protection.”

“I see more falling than anything else,” said Marientina Gotsis, an associate professor of research at the Interactive Media and Games Division of the University of Southern California. “You can trip and hit your head or break a limb and get seriously hurt, so someone needs to watch over you when you are using VR. That’s mandatory.”

Be sure to play VR under the supervision of someone who is not involved, and keep pets, small children and other obstacles out of the area.

Eye health is a concern with virtual reality, as well. One University of California, Berkeley optometry professor, Martin Banks, said that there are a “variety of potential issues.”

“One is how we affect the growth of the eye, which can lead to myopia or nearsightedeness,” Banks said. “Looking at tablets, phones and the like, there’s pretty good evidence that doing near work can cause lengthening of the eye and increase risk for myopia,” Banks said. “We’re all worried that virtual reality might make things worse.”

VR could also cause motion sickness. While many people who use virtual reality complain of eye strain and headaches, others have complained about nausea.

In real life, our eyes come together and focus on a single point. Virtual reality separates those two acts and confuses the brain.

“In a virtual environment, the way we look and interact is changed because we may be projecting onto the eyes something that looks far away, but in reality, it’s only a few centimeters from the eye,” said Walter Greenleaf, a behavioral neuroscientist who has studied VR in medical settings for over 30 years.

This is called the “vergence-accommodation conflict,” and scientists aren’t sure how serious the issue is. Most people look at cell phones and tablets for short periods of time, but it is easier for users to spend longer periods of time with VR.

Occulus suggest users take a “10 to 15 minute break every 30 minutes, even if you don’t think you need it,” when using virtual reality.

Eyes aren’t the only senses under strain with virtual reality. Your ears can suffer damage as well. Occulus Rift said, “Listening to sound at high volumes can cause irreparable damage to your hearing.”

Most devices include a warning which directs users to see a doctor before use if they are “pregnant, elderly or have pre-existing conditions that may affect your virtual reality experience such as vision abnormalities, psychiatric disorders, heart conditions or other serious medical conditions.”

People who have implanted devices, such as pacemakers, hearing aids and defibrillators, as well as anyone with epilepsy or a history of blackouts and seizures, are included in that warning. However, manufacturers reported that people can seize even without a history of blackouts, especially those younger than 20.

If using VR, keep an eye out for involuntary muscle twitches and loss of balance as a sign of a potential problem.

One of the manufactures, DayDream View, warned that sharing VR devices can spread contagious diseases and infections.

Children, however, are the most at risk.

Director of Stanford’s Virtual Human Interaction Lab, Jeremy Bailenson, uses VR and on subjects in his lab everyday, but limits his six-year-old daughter’s exposure. She has only used it four times in her life, at a duration of five minutes all four times.

“We read a lot of new studies in our work,” he said, “but what we are seeing is a ton of studies on medical applications and not many with young kids, and not really any with really young kids.”

Because children are so susceptible to confusing virtual reality with the real thing, the youngest are most at risk. Parents should therefore be careful of what their children see in VR.

However, the good news is that future research will show that virtual reality can be enjoyed by kids without harming them, according to Bailenson.