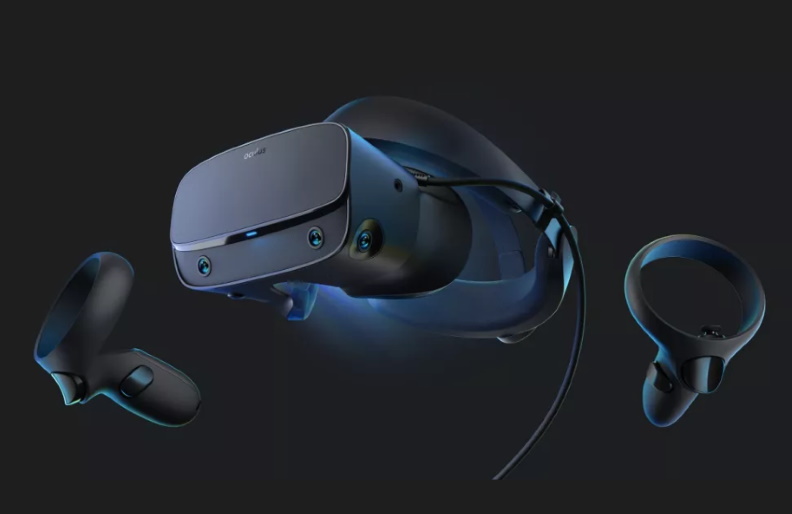 Starting in October, new Oculus VR headset owners will need a Facebook account if they want to use their device. The message from Oculus doesn’t leave any room for misinterpretation: “Everyone using an Oculus device for the first time will need to log in with a Facebook account,” the company wrote in a blog post.

The official Oculus application is where users configure their Oculus VR headsets, update drivers, and make purchases from the Oculus Store. You can use an Oculus headset with third-party software, but it seems like it’d be very difficult to avoid the official app, at least for the initial setup.

Existing Oculus headset owners will be able to keep using their standalone Oculus accounts for now, which are just tied to an email address. Come 2023, however, their accounts will no longer be supported and they will lose “full functionality” (whatever that means after three years of changes to the software). To keep full functionality, their only option will be to merge their Oculus account with a Facebook account.

If you’re an existing user and choose not to merge your accounts, you can continue using your Oculus account for two years.

Oculus was acquired by Facebook in 2014. While it meant that the concept of finances became purely theoretical for the once Kickstarted company, enthusiasts feared that Facebook would turn VR into just another way to feed its hunger for personal data. Predictably, Facebook does want to incorporate VR into its vast social network, and that’s what’s behind this accounting requirement.

“Giving people a single way to log into Oculus—using their Facebook account and password—will make it easier to find, connect, and play with friends in VR,” wrote the company. “We know that social VR has so much more to offer, and this change will make it possible to integrate many of the features people know and love on Facebook.”

It’s easy to see Facebook’s vision here. You’re connected to everyone you know on Facebook, and can see when they’re in VR, and join them, and share images taken in VR with your other friends to get them on board, and eventually, Facebook replaces reality entirely and we’re all taking orders from Virua-Zuck. (You can read the specifics of Facebook’s vision on the Oculus blog.) 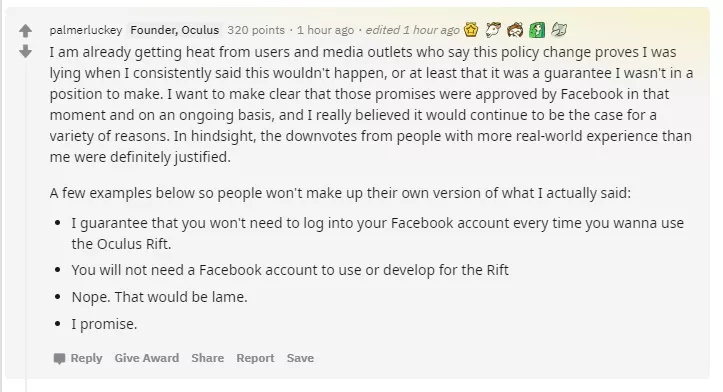 Oculus founder Palmer Luckey, who left the company in 2017, responded to the news on Reddit, acknowledging that he was wrong back when he promised that the Facebook acquisition wouldn’t mean users and developers would have to log in with Facebook accounts.

“I want to make clear that those promises were approved by Facebook at that moment and on an ongoing basis, and I really believed it would continue to be the case for a variety of reasons,” Luckey wrote. “In hindsight, the downvotes from people with more real-world experience than me were definitely justified.”

While the change may not ultimately hinder Oculus—Facebook’s active accounts are measured in billions these days, after all—the social network is not exactly popular among tech enthusiasts. Facebook is arguably the biggest source of online privacy concerns in the world, or at least it’s neck-and-neck with Google.

Last year, Facebook paid a $5 billion US Federal Trade Commission fine which the agency says “holds them accountable for putting profits over their privacy promises.” This year, it agreed to pay $650 million to users in Illinois for violating state law regarding biometrics, because it was using facial recognition on user-uploaded photos without obtaining explicit consent to do so.

The largest Oculus competitor is Valve’s SteamVR system, which supports headsets from multiple manufacturers, including Valve’s own Index. SteamVR obviously requires a Steam account to use, and while Steam has issues, it notably isn’t Facebook and hasn’t frequently been accused of being a curse the world can’t shake. In the eyes of hardware enthusiasts, I think it’s safe to say that this Facebook account requirement will be a major consideration when choosing a VR headset.