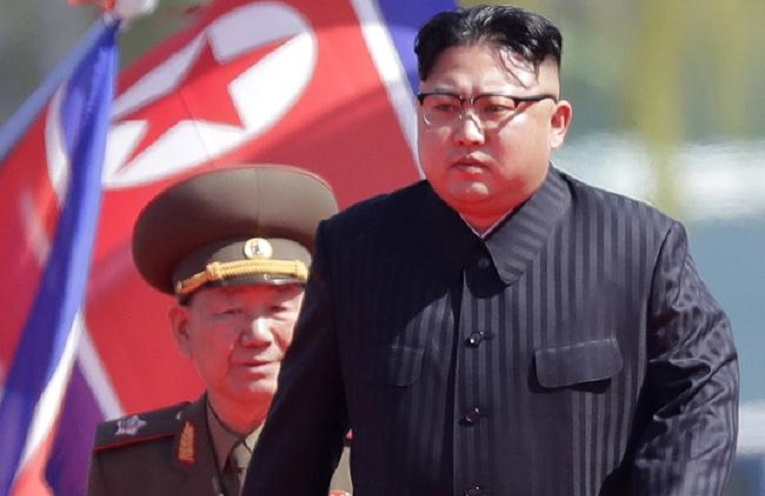 PARANOID Kim Jong-un has dubbed America’s leaders a bunch of “rats sneaking around in the dark” amid claims the CIA plotted to wipe him out.

North Korea last week accused US spies of spearheading a bizarre mission to assassinate the ‘Glorious Leader’ by using a lumberjack to poison him, The Sun reports.

It said the plan was to kill Kim during a public ceremonial event in Pyongyang. North Korea’s Ministry of State Security accused the two countries of having a North Korean worker abroad infiltrate the country.

Now the Ministry has let rip again — this time using the words of its citizens.

In a statement signed off by Kim, it said: “Ri Kwang Rim, an officer of the Korean People’s Army (KPA), said he could hardly repress his indignation against the US, kingpin of international terrorism, and the South Korean puppet group of traitors for hatching a vicious plot to hurt the supreme leadership of the DPRK.

“We are keeping within our sight the US, a source of evils and chieftain of terrorism, and the South Korean puppet group of traitors running amok to get the sun eclipsed.

“The KPA is fully determined to wipe out the throng of rats sneaking around only in the dark afraid of the invincible might of the KPA.

“The enemies will clearly see how powerful a series of our-style anti-terrorism striking actions and righteous strike of the invincible revolutionary Paektusan army would be.”

North Korea is seeking to extradite anyone involved in the alleged assassination plot.

Pak Myong-chol, a worker of the Hwanghae Iron and Steel Complex, said: “It is high time to mete out a merciless punishment to the heinous enemies who seek for hurting our supreme leadership.

“We will ferret out to the last one the organiser, conspirator and followers of the recent hideous state-sponsored terrorism even by ransacking the whole earth, no matter at which corner of the planet they may be, and throw them into electric furnace.”

Ri Kum-chol, head of the Cha Kwang Su Youth Shock Brigade in the Ongjin Mine, said: “The US imperialists and the South Korean puppet riff-raffs hatched a plot to hurt our supreme leadership by use of biochemical substance.

“It is our determination to frustrate the heinous enemies’ outrageous plots with increased production in the spirit of self-reliance and self-development.”

The CIA has established a mission centre geared towards dealing with advancements in North Korea’s nuclear and ballistic missile programs.

“Creating the Korea Mission Centre allows us to more purposefully integrate and direct CIA efforts against the serious threats to the United States and its allies emanating from North Korea,” said CIA Director Mike Pompeo.

Tensions remain high on the Korean Peninsula after belligerent exchanges between Kim and President Donald Trump, who deployed a naval strike group to the West Pacific last month and advanced the installation of the THAAD defence system in South Korea. North Korea has threatened a nuclear strike if provoked by the US.

Moon Jae-in, a liberal former human rights lawyer, was sworn in on Wednesday and said in his first speech he would immediately address security tensions raising fears of war on the Korean peninsula.

“The resolution of the North Korean nuclear issue must be comprehensive and sequential, with pressure and sanctions used in parallel with negotiations,” spokesman Yoon Young-chan quoted him as telling Xi.

“Sanctions against North Korea are also a means to bring the North to the negotiating table aimed at eliminating its nuclear weapons,” Yoon told a briefing, adding that Xi indicated his agreement.

Moon has taken a more conciliatory line with North Korea than his conservative predecessors and advocates engagement. He has said he would be prepared to go to Pyongyang “if the conditions are right”.