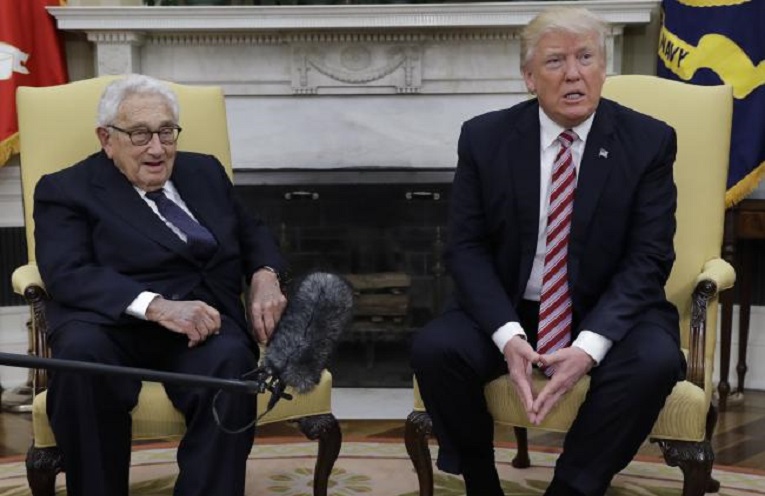 Donald Trump has said he was thinking of “this Russia thing” when he decided James Comey’s fate – contradicting the White House rationale that he fired the FBI director for mishandling the Clinton email investigation.

Comey had been leading an investigation into possible collusion between Trump advisers and Russian officials when he was dismissed by the president. Defending that decision in an interview on NBC News on Thursday, Trump said: “And, in fact, when I decided to just do it, I said to myself, I said: ‘You know, this Russia thing with Trump and Russia is a made up story, it’s an excuse by the Democrats for having lost an election that they should’ve won.’”

Trump also said there were three occasions on which Comey assured him he was not under investigation. The president said he called the director of the FBI to ask for an update on a possible criminal investigation into his ties with Russia.

In the NBC interview Trump also flatly contradicted his own vice-president and spokesman by saying he decided to fire James Comey before receiving a recommendation from the deputy attorney general.

Trump recalled three conversations with Comey about the FBI investigation into Russian interference in last year’s presidential election. First, he said, there was a dinner which was also about Comey’s future, raising the prospect that Trump could threaten his job.

“He wanted to stay on at the FBI,” Trump said, “and I said I’ll, you know, consider and see what happens … But we had a very nice dinner, and at that time he told me, ‘You are not under investigation.’’’

Then there were two phone calls, one made by Trump, another by Comey. The president admitted: “I actually asked him, yes. I said, ‘If it’s possible would you let me know, am I under investigation? He said: ‘You are not under investigation.’”

The revelations are likely to trigger a fresh storm of criticism. Perceptions that Trump fired Comey because of the Russian investigation have been central to the controversy surrounding the dismissal. Meanwhile, Trump asking whether he was under investigation would not be illegal, but highly irregular. On Thursday, Trump’s words earned immediate comparisons with then attorney general Loretta Lynch’s controversial meeting with Bill Clinton last June, during the investigation into Hillary Clinton’s use of a private email server while secretary of state.

Matthew Miller, a former spokesman for the Department of Justice, told MSNBC: “It’s completely inappropriate for [Trump] to ask that question … It would also be a violation of DoJ rules for James Comey to answer it.”

Asked at Thursday’s White House press briefing if it was inappropriate for Trump to have asked Comey if he was under investigation, deputy press secretary Sarah Huckabee Sanders said: “No, I don’t believe it is.”

She added: “I don’t see it as a conflict of interest and neither do many of the legal scholars who’ve been commenting on it over the last hour.” Sanders did not identify which “legal scholars” that she was referring to.

When the president fired Comey on Tuesday, the White House released a memo from deputy attorney general Rod Rosenstein that criticised Comey for mishandling last year’s investigation into Hillary Clinton’s emails. Press secretary Sean Spicer claimed it was this memo that prompted Trump to remove Comey, a position backed by vice-president Mike Pence on Wednesday.

But in the NBC interview, Trump said of Comey: “He’s a showboat, he’s a grandstander, the FBI has been in turmoil. You know that, I know that. Everybody knows that. You take a look at the FBI a year ago, it was in virtual turmoil, less than a year ago. It hasn’t recovered from that.”

The revelation came amid a flurry of reports suggesting that Trump had grown increasingly irate with Comey in recent weeks because of his high profile, his failure to stop leaks, his pursuit of the Russia investigation and his lack of support for the president’s claim that he was wiretapped by Barack Obama.

In the end, he fired Comey late on Tuesday afternoon, a move that seemed to take many White House staff by surprise. The official reason given was the FBI director’s mishandling of the investigation into Clinton’s emails.

The acting head of the FBI, meanwhile, said on Thursday that Comey enjoyed broad support among its staff – directly contradicting the White House assertion that he had lost the confidence of the FBI rank and file.

Confronted at a Senate intelligence committee hearing with the claim of Comey’s unpopularity, Andrew McCabe said: “That is not accurate.”

“I can tell you I worked very, very closely [with Comey] from the time we started at the Washington field office,” he said. “I hold Director Comey in the highest regard for his considerable abilities and his integrity. It is the greatest honour of my professional life to have worked with him. He enjoyed broad support in the FBI and he still does to this day … the vast majority of FBI staff enjoyed a deep and positive connection to Director Comey.”

In contrast, Sanders told reporters on Thursday that she had been in contact with “countless” FBI agents via text and email who expressed their support for the decision. She did not identify them or explain why a White House press staffer would be in contact with FBI agents.

Earlier on Thursday, Sanders told CBS News Trump was “very likely” to visit FBI headquarters “in the next few days”. But later the MSNBC network reported that the visit would not be happening after agency officials told the White House that Trump would not be greeted warmly.

Making his first public appearance since Comey’s dismissal, McCabe promised to tell the Senate committee if he came under pressure to shut down the investigation into possible links between Trump’s associates and Russia during last year’s election. He said he had met Trump this week but the Russian investigation did not come up.

Asked by Senator Marco Rubio if Comey’s abrupt dismissal would impede the work of the FBI, McCabe was adamant.

“You cannot stop the men and women of the FBI from doing the right thing and upholding the constitution,” he said. Later he said the Russian investigation would be pursued “vigorously and completely”.

To reports of Comey having asked for more resources for the investigation, McCabe said he was not aware of any such request and insisted the Russian investigation had the resources it needed.

Opening the hearing on global threats that heard evidence from the heads of the main US intelligence agencies, the committee’s Republican chairman, Richard Burr, said it would not be solely focused on the Trump-Russia enquiry. However, Democratic senators repeatedly returned to the issue.

“It is impossible to ignore that one of the leaders of the intelligence community is not here with us today,” said the top Democrat on the committee, Mark Warner. “The president’s firing of FBI director Comey … was a shocking development.

“The timing of Director Comey’s dismissal to me and many committee members on both sides of the aisle is especially troubling. He was leading an active counterintelligence investigation into any links between the Trump campaign and the Russian government or its representatives, and whether there was any coordination between the campaign and Russia’s efforts to interfere in our election.

“For many people, including myself, it is hard to avoid the conclusion that the president’s decision to remove Director Comey was related to this investigation. And that is unacceptable.”

It emerged on Wednesday evening that the committee had issued a subpoena for the president’s former national security adviser Michael Flynn, requesting “documents relevant to the committee’s investigation into Russian interference with the 2016 election”.

Comey – who found out he had been fired when the news flashed up on a screen behind him when he was addressing staff in Los Angeles – sent a farewell letter to FBI staff on Wednesday.

“It is very hard to leave a group of people who are committed only to doing the right thing,” he wrote. “My hope is that you will continue to live our values and the mission of protecting the American people and upholding the constitution.”