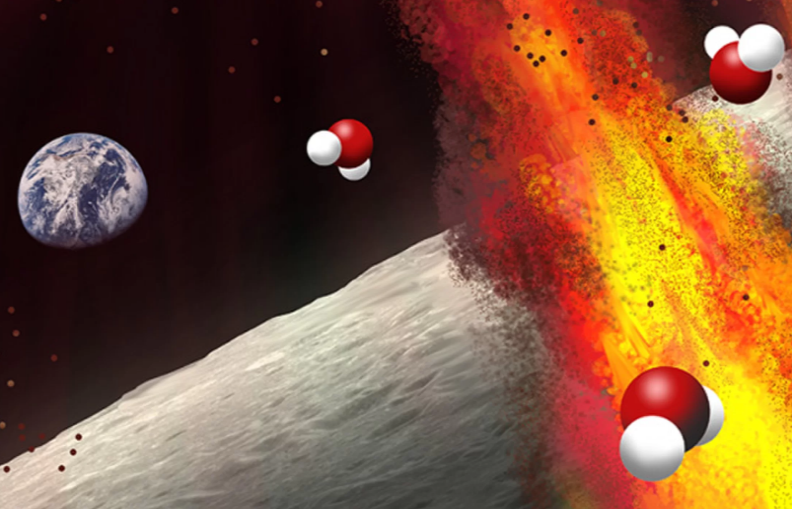 Ancient volcanic deposits on the moon reveal new evidence about the lunar interior, suggesting it contains substantial amounts of water.

Using satellite data, scientists from Brown University studied lunar pyroclastic deposits, layers of rock that likely formed from large volcanic eruptions. The magma associated with these explosive events is carried to the moon’s surface from very deep within its interior, according to a study published today (July 24) in Nature Geoscience.

Previous studies have observed traces of water ice in shadowed regions at the lunar poles. However, this water is likely the result of hydrogen that comes from solar wind, according to the new study’s lead author, Ralph Milliken, a geologist at Brown University. The new research reveals there is likely a large amount of water in the moon’s mantle, as well. This suggests that the water was delivered to the moon very early in its formation, before it fully solidified, Milliken told Space.com.

“We observe the water in deposits that are at the surface today, but these deposits are the result of magma that originally comes from deep within the lunar interior,” Milliken said. “Therefore, because the products of the magma have water, the deep interior of the moon must also contain water.”

The researchers analyzed satellite data from the Moon Mineralogy Mapper instrument aboard India’s Chandrayaan-1 probe, which measures reflected sunlight at visible and near-infrared wavelengths. In order to estimate the amount of trapped water in the pyroclastic deposits, the scientists had to isolate the reflected sunlight from the thermal energy emitted by the moon’s hot surface.

“Different minerals and compounds will absorb and reflect light in different ways, so in our case we looked at wavelengths where [the molecules] H2O and OH absorb light,” Milliken said. “We found that there were larger absorptions, or less reflected sunlight, at these wavelengths for pyroclastic deposits, which indicates they contain OH or H2O.”

Previously, scientists from Brown detected trace amounts of water in similar volcanic samples — which are composed of loose material or “glass beads” — brought back to Earth from the Apollo 15 and 17 missions. However, the Apollo samples were not collected from the large pyroclastic deposits mapped using the satellite data in the recent study. This brought into question whether the Apollo samples represent a large portion of the moon’s “wet” interior or if they represent only a small water-rich region within an otherwise “dry” mantle.

“Our work shows that nearly all of the large pyroclastic deposits also contain water, so this seems to be a common characteristic of magmas that come from the deep lunar interior,” Milliken said. “That is, most of the mantle of the moon may be ‘wet.'”

However, the question of how the water got in the moon’s interior remains unresolved.

“It is generally thought that the giant impact event that formed the moon was too energetic and hot for water to remain, yet there it is,” Milliken told Space.com. “One option is that the water was delivered after the giant impact event, but before the moon had completely cooled, likely due to impacts by water-bearing comets and asteroids.”

Evidence of water deep beneath the lunar surface may also have implications for how Earth got its water, scientists say. Furthermore, the study’s findings suggest that the pyroclastic deposits could possibly be mined for water, which, in turn, could fuel future missions to the moon.

“These deposits may be much easier to access than potential water ice in shadowed regions at the lunar poles,” Milliken said. “Water is heavy and expensive to take from Earth to space, so any bit of water that you can get on the moon instead of bringing with you from Earth is a big deal and opens up possibilities for sustained human presence on the moon.”

Going forward, the scientists would like to map the pyroclastic deposits in greater detail so that they can better understand how water concentrations vary among different deposits on the lunar surface. Milliken also noted that these deposits would be great targets for future exploration, during which samples could be collected and later studied to further refine the estimated water content of the moon’s interior.

“If humans may go to one of these places, then we want to have the best possible roadmaps and resource maps that we can,” Milliken said. “We’ll also try to integrate our satellite observations with theoretical models of volcanic eruptions to better constrain our estimates of the amount of water.”

“The better we understand how much water is there, then the better we can estimate the processes responsible and the usefulness of the deposits for future human exploration,” he added.

This article was originally published by Space.com. Read the original article.