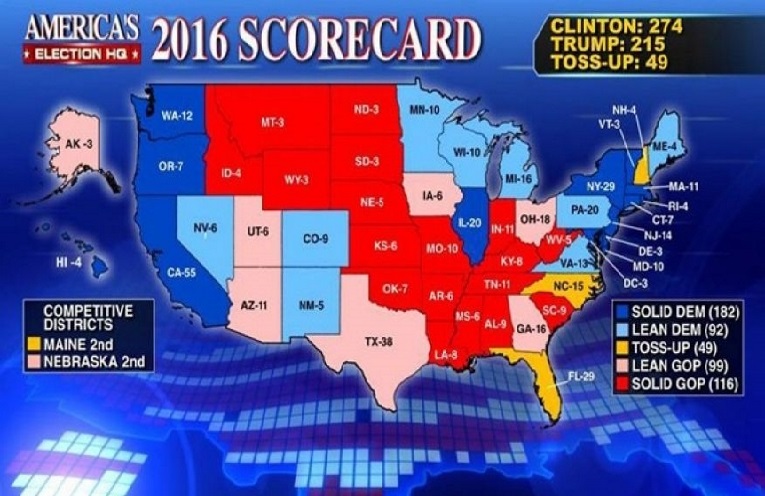 The battleground map is shifting once again in Donald Trump’s favor, according to the latest Fox News Electoral Scorecard, portending a potentially tight race Tuesday against Hillary Clinton, who continues to hold the electoral-vote advantage.

According to an update to the scorecard released Monday, Clinton can still get to the necessary 270 electoral votes by winning all the states rated “solid” or “leaning” Democratic.

But just barely. Doing so would get Clinton to 274.

Trump is looking at a narrow – but expanding – path to 270, and he could win by snatching up the toss-ups and flipping at least one state currently seen as leaning toward Clinton.

All but the rating change in Nevada reflect an improving picture for the Republican nominee, even as the latest polls show a mixed picture. A Fox News poll released Monday morning showed Clinton expanding her lead to 4 points nationally.

If Trump wins the “solid Republican” states along with those currently seen as leaning in his direction he’d come away with 215 electoral votes. Winning the toss-up states and their 49 electoral votes wouldn’t be enough for Trump — he’d have to steal a blue state.

Trump and Clinton are both keeping an aggressive campaign schedule on the eve of the election, trying to drive out supporters in the final swing.

Trump, speaking Monday in Saratoga, Fla., the first of five rallies, said if he wins, “corrupt politicians and their donors lose.”

On the heels of the FBI once again closing its Clinton email investigation, he said: “Now it’s time for the American people to deliver justice at the ballot box.”

Before embarking on a final campaign swing through three battleground states, Clinton told reporters that she has “some work to do to bring the country together” and that she wants to be president for those who vote for her and those who don’t.

In the latest ratings, North Carolina was shifted to “toss up” amid a heated race for the critical battleground.

Clinton long held a small lead in the polls there, but the race has tightened to the point where neither candidate has a clear advantage.

Utah has been a hard state to gauge, with independent candidate Evan McMullin surging in several October polls. McMullin could still potentially surprise Tuesday night, but Trump now seems to have the advantage.

Nevada, meanwhile, is shifting to “lean Democrat” as early voting in the state suggests a turnout surge among Hispanic voters coming out against Trump.