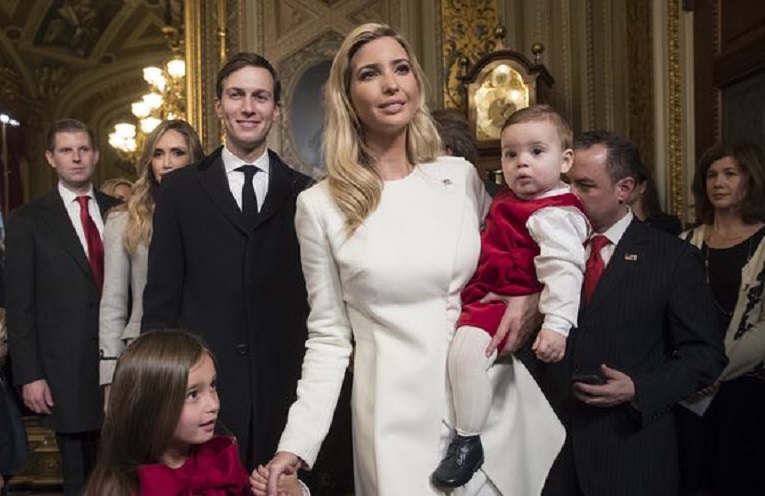 Ivanka Trump’s new book, Women Who Work, was launched on Tuesday, giving a dramatic glimpse into the life of the wealthy woman dubbed the “first daughter of the United States”.

It quotes liberally from a host of professional life coaches, and includes tips from successful business leaders such as Sheryl Sandberg, Bill Gates and Steve Jobs. But it also includes illuminating pieces of advice from Ivanka herself, generated from a paradoxical lifestyle of enormous privilege combined with a grinding work ethic, and an outlook that simultaneously lifts women up while also guilt-tripping them.

Given her role as a real estate executive in the family firm and leader of a fashion brand, Ivanka’s guide to navigating the workplace may have seemed unremarkable. But in her new embodiment as a White House adviser to her father, the president, her mission set out in the book appears glaringly at odds with the direction of the Trump administration – with or without her advice.

Ivanka Trump writes early in the book: “Inspiring and empowering women who work – at all aspects of their lives – has been my mission throughout my entire career. Today I have the opportunity to take that work to new heights and advocate for change on a far greater scale than I’d ever imagined.”

She declares it her life’s mission to change society’s “ingrained negativity” about the image of the “working woman”.

Trump writes that she had been “grappling with whether being a young female executive with a baby would undermine my authority in the eyes of my colleagues and peers in a very male-dominated [real estate] industry” and had refrained from putting home life pictures on social media. But then: “I began to wonder whether I had been doing women who work a disservice by not owning the reality that, because I’ve got an infant, I’m in my bathrobe at 7AM and there’s pureed avocado all over me.”

Accept the fact that there is no such thing as work-life balance any more, so look out for the 11pm emails – maybe even on Saturday night

When working at her fashion brand and real estate offices in New York before her father became president: “I do all the things that must be accomplished face to face between the hours of 8am and 6pm. The rest I leave for later … after the kids have gone to bed … I start making the [office] rounds at 5.30pm to check in and announce that I’m going home as I leave. My team knows … to expect emails from me at 11pm – and that I don’t expect an answer at that hour, unless they, like me, leave early!” Trump and Kushner observe the Jewish Sabbath. “The break is what enables me to go back to work, full steam, the following Monday – or, more realistically, Saturday night when I log back on!”

Think big. It’s not just about you

“Design a life that honors your individual passions and priorities in a way only you can … What that looks like and how to achieve it is different for each and every one of us … Women like you and me are … owning who we are … We’re defining what it means to be a modern woman who works: for ourselves, our families, our companies, the culture at large and the generations to come.”

But don’t forget you, especially when it comes to massage and meditation – unless your dad is in the thick of running for president

“During the [election] campaign, I went into survival mode: I worked and I was with my family; I didn’t do much else. Honestly, I wasn’t treating myself to a massage or making much time for self-care. I wish I could have awoken early to meditate for twenty minutes and I would have loved to catch up with the friends I hadn’t seen in three months, but there just wasn’t enough time in the day.”

Unlock your creativity but stay grounded, especially by gardening at your country house “Read a book or a magazine, power nap or meditate, listen to music, learn calligraphy, chess, cooking, a language or dancing … Gardening is our [family’s] new thing. Getting our hands dirty … it connects us with nature, gives me a great way to explain seasons to the kids and encourage healthy eating while having fun in the fresh air. On the weekends we hang out at our country home in New Jersey.”

If you don’t go back to work within a week of having your first baby (as Trump did), you may enjoy your maternity leave more if you also work at the same time

“You can go off the grid completely during maternity leave and be totally within your rights, but staying in the loop and knowing that things are getting done may help you relax and focus on your baby … If you plan to be in touch [with the office], choose a day and time that’s consistently convenient for you (eg when your mother-in-law is on newborn duty.)”

Don’t sleep too much … especially if you are Ivanka, or work for her

“I was inspired to create the Women who Work initiative to change the conversation around work and family … It’s the ‘why’ behind the initiative and my brand that gets me out of bed at the crack of dawn every morning, and is what deeply motivates my team … it also means getting back to work once [the kids] are asleep and cranking until midnight or later.”

Make lists, many lists, at home, at work, at play. They may or may not include ‘must clean the house’

“I write a list for connecting with each of my kids. I put real thought into coming up with ideas for memorable moments I can create with each of them. I play cars with Joseph [the older of her two sons], on the floor, for 20 minutes each day. Arabella [her daughter and oldest of her three children] loves books, so I make a note to read at least two per day to her and plan ‘dates’ to the library …

I draft a general family list that includes things like how often [my husband] Jared [Kushner, now senior adviser to president Donald Trump] and I will go on an official date night (every other week!) … I’ve built an entire system of symbols that denote how timely each item on my to-do list is.”

Relaxing in front of the TV after a busy day is not OK, but not wearing make-up sometimes is OK

“Sometimes I like turning on Real Housewives and sitting in front of the TV eating a giant bowl of pasta with a glass of wine, but if I’m honest with myself, it’s kind of counterproductive. It is in these moments especially that we should meditate, soak in the tub, exercise or take a long walk … [Meanwhile,] I often hear things like ‘it’s so inspiring that you’re such a hands-on mom’ and ‘So amazing! You’re not wearing makeup. I’m used to seeing you on The Apprentice in a powerful boardroom setting.’”

There should be more women in boardrooms and they should be paid more – so it’s up to them to ask. And being happy is your responsibility

“I know lots of people who are outwardly successful and inwardly miserable – to me, that’s not success, but that’s the path they’ve chosen, consciously or not … You can’t change the [corporate] culture if you don’t ask – and you’re not going to get what you want if you aren’t creating high value for your company … Too often, for reasons like a lack of flexibility or poor support at home and/or at work, women are talking themselves out of great opportunities … One by one we must fight for ourselves, for our rights not just as workers but also as women. We must prioritize our families and passions, we must serve as role models … ”

“I felt it was my duty and obligation to take a stand on issues that contribute to wage inequality, such as our country’s failure to mandate paid leave for American workers and the lack of safe, affordable high-quality childcare … This is not a women’s issue, although mothers in particular are disproportionately affected … It is a family issue that affects men, women, children, and businesses nationwide … We need to fight for change.”