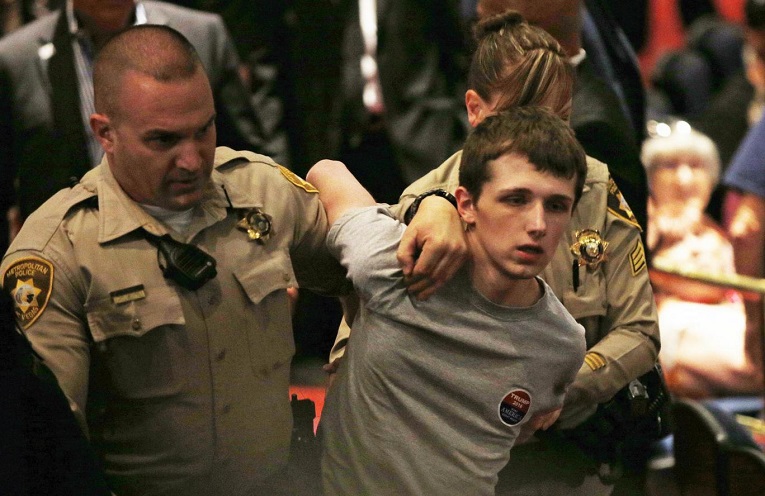 Exclusive: Michael Sandford due to be met by parents at Heathrow this morning

Michael Sandford, the British man imprisoned in the US for attempting to shoot Donald Trump, has returned to the UK, The Independent understands.

Mr Sandford was sentenced by a US court to one year in jail in December but has seemingly been allowed to return to Britain after less than five months.

The 20-year-old was due to fly back to London on a Delta Airlines flight that landed at Heathrow shortly after 11am on Thursday morning.

It is understood he was due to be met by his parents at the airport. It is unclear if he will serve the remainder of his sentence in the UK.

Mr Sandford, who suffers from autism, attended a Donald Trump rally in Las Vegas in June 2016 and attempted to grab hold of an police officer’s gun.

After being arrested, he told investigators he had been trying to shoot the now US President.

US officials had not announced Mr Sandford was being released.

A Home Office spokesperson said they could not comment on individual cases.

During a hearing last September, a court heard that Mr Sandford entered the US illegally and drove from San Bernardino, California, to the Treasure Island Casino in Las Vegas to kill Mr Trump.

Once there, he attempted to grab hold of a police officer’s pistol but was apprehended and arrested.

Mr Sandford allegedly took shooting lessons in the city the day before the rally. His lawyers said he suffered from mental illness and was in the middle of a psychotic episode at the time of the incident.

During the trial, judge James Mahan told the 20-year-old: “You should not be ashamed or embarrassed about it. You need medication.

“You’re not a hardened criminal. You’re not evil or a sociopath like a lot of people we have.”

Mr Sandford’s mother, Lynee, made an emotional appeal on behalf of her son while he was in custody.

“He means everything to me,” she said. “He made a very bad mistake, a huge error of judgement. It breaks my heart to see him in this environment.”

Ms Sandford said her son was “a good person at heart” but needed “psychiatric help”. He was “very remorseful for what he did”, she added.