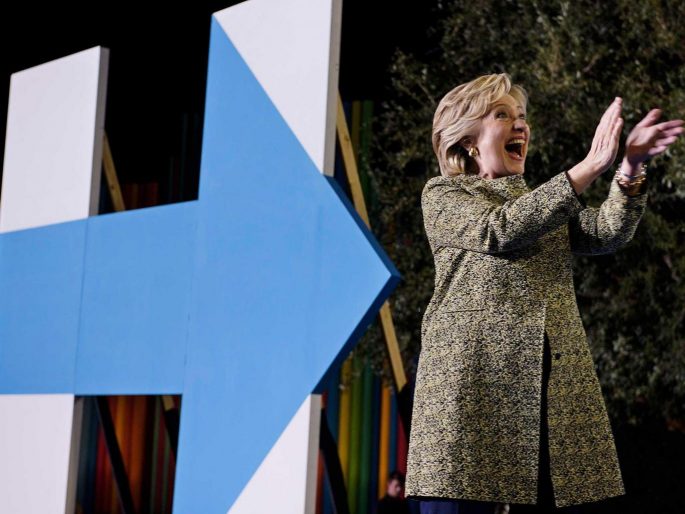 ‘This is big stuff,’ Trump tells his mass rallies of true believers, excoriating ‘Crooked Hillary’ and her matchless duplicity. But who’s going to wade through thousands of emails, when a hot mike on Access Hollywood provides such entertainment?

Hillary Clinton is a very lucky lady. Were it not for Donald Trump – the groping allegations, his fantasising about a global conspiracy to block him from the Presidency, and the shambles to which he has reduced the Republican party – these last weeks of the campaign would be all about Clinton emails.

No, not those emails, the ones sent on her private server and deleted when she was Secretary of State, that we’ve heard so much about over the past 18 months. These emails are from the private account of John Podesta, the Clinton campaign chairman, currently being dumped by WikiLeaks at rate of around 2,000 a day.

Let us set aside the admittedly massive question of precisely how WikiLeaks got hold of them. The prime suspects are the Russians, who would be delighted by a Trump win. Moscow of course is all po-faced indignation: hackers, us? The fact is that the MO of this particular cybertheft is identical to others which the Obama administration has publicly and blamed the Russians. And not only that. Podesta claims the Russians and/or WikiLeaks tipped off Trump in advance.

Fortunately for Hillary, no-one is paying much attention, all of us transfixed by tales of Trump the serial sexual assaulter. But we would do well to. Not just because of the news value of the Podesta material, but also for the light it sheds on how a future Clinton administration would probably function.

As yet there’s been no smoking gun, a jaw-dropping revelation to upstage even what’s been happening with the opposition, though there still might be: WikiLeaks has probably got enough stuff to keep the pot bubbling right up to 8 November. Meantime, there’s already plenty that would be pretty embarrassing, in a normal campaign against a normal opponent.

Just a few examples. One email suggests that a Hillary campaign operative was in touch with officials at the Justice Department, seeking to find out how the Department would handle an investigation into the State Department emails. Another features an exchange in which a top Clinton aide makes some unflattering remarks about Catholics, who constitute almost a quarter of the electorate.

There’s evidence of pre-scrutinised questions for candidate Clinton at a supposedly spontaneous Democratic town hall meeting, and an attempt to get the date of Illinois’s primary moved back (in order, a staffer argues) to reduce the risk it will boost the prospects of a moderate Republican who would represent the biggest threat to Clinton. “The Clintons won’t forget what their friends have done for them,” the email noted. Cosa nostra? More like Cosa Clinton.

Not least, the trove opens a fascinating window into a campaign notable for its secrecy. The Praetorian guard, led by Huma Abedin, wanted it to stay that way, arguing that pesky questions from reporters would be a distraction from the pre-ordained message of the day Podesta though argued these tactics would be “suicidal,” and belatedly Clinton is now talking to reporters on her plane – though careful to say nothing interesting enough to be a distraction from the Trump follies.

Then there’s the infighting, the bickering, the snide putdowns of colleagues, the ego clashes of people with a highly developed sense of their own importance, many of whom have been round this course before, either with Hillary in 2008, or with Bill Clinton two decades ago.

The emails reveal how her aides and outside advisers get along (or don’t), which outsiders matter to the campaign, and which ones don’t. You catch glimpses of the wheedling, the favours sought, and the inevitable sucking up to a perceived winner, not to mention not-so-discreet manoeuvring for jobs in a future Clinton administration.