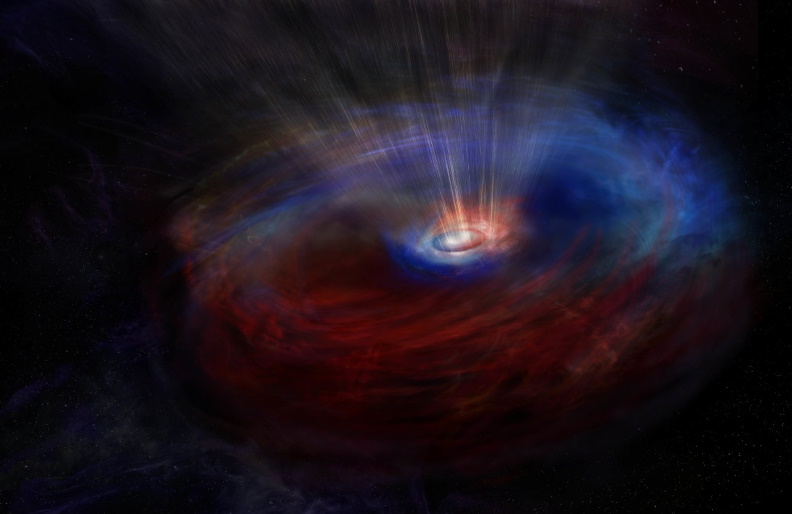 Astronomers have discovered a galaxy with some strange clouds orbiting the supermassive black hole in the center. Rather than all circling in the same direction as is usually expected, the galaxy NGC 1068 has two rings that orbit in opposite directions. This phenomenon might go a long way towards explaining another long-standing cosmic puzzle.

When water is sucked down a drain, the liquid swirls around in one direction. Black holes generally work the same way, pulling dust and gas and anything else that gets too close, into a spiral that usually moves in one direction.

But that’s not the case for the galaxy NGC 1068. Located about 47 million light-years from Earth, it’s hard to get a good look at the galaxy thanks to a large cloud of dust and gas in the center, obscuring its supermassive black hole. But now astronomers from the National Radio Astronomy Observatory (NRAO) have peered closer using the ALMA telescope, and found a strange circulation pattern at the heart of the galaxy.

“Thanks to the spectacular resolution of ALMA, we measured the movement of gas in the inner orbits around the black hole,” says Violette Impellizzeri, lead author of the study. “Surprisingly, we found two disks of gas rotating in opposite directions.”

“We did not expect to see this, because gas falling into a black hole would normally spin around it in only one direction,” says Impellizzeri. “Something must have disturbed the flow, because it is impossible for a part of the disk to start rotating backward all on its own.”

This kind of counter-rotation is not completely unheard of in galaxies, but it’s never been seen on this scale before. Normally, if it is spotted it’s happening to stars and other matter on the fringes of a galaxy, thousands of light-years from the center, which is moving in the opposite direction.

In those cases, the cause is usually a collision with another galaxy that was spinning in the opposite direction. The researchers believe something similar may be at play in NGC 1068 – the backwards rotation may be the remnants of a smaller captured galaxy, or gas clouds that fell out of the host galaxy.

Perhaps most interestingly, this two-faced galaxy could go a long way towards explaining a different mystery. Astronomers have spotted plenty of supermassive black holes at huge distances from Earth – meaning we’re seeing them as they appeared in the very early years of the universe. According to current models, it should take several billion years for black holes to grow to this mass, so a persistent puzzle has been how they get so big so quickly.

“Counter-rotating gas streams are unstable, which means that clouds fall into the black hole faster than they do in a disk with a single rotation direction,” says Impellizzeri. “This could be a way in which a black hole can grow rapidly.”