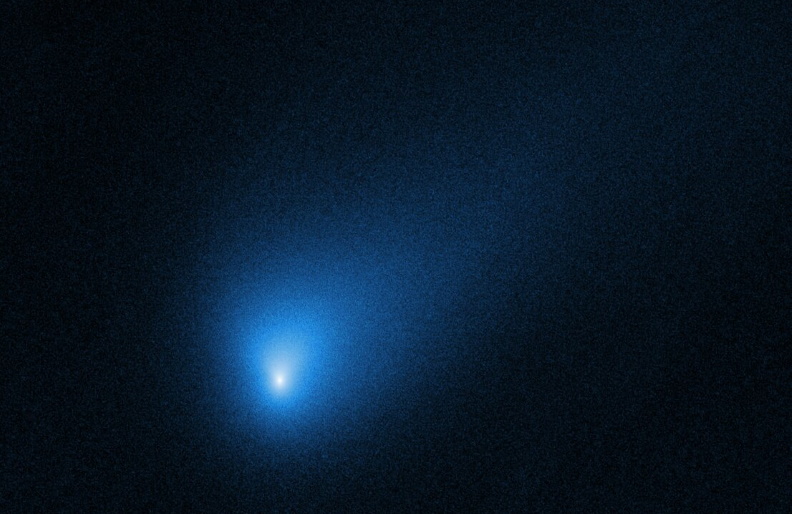 The Hubble Space Telescope has captured the best pictures yet of our newest interstellar visitor.

This comet from outside our solar system is zooming by us at a blistering 110,000 mph (177,000 kph). Hubble caught some glam shots over the weekend from a distance of 260 million miles (420 million kilometers). The photos were released on Wednesday.

It’s the second known interstellar visitor to swoop through our solar system. An amateur astronomer from Crimea, Gennady Borisov, discovered the comet in August, two years after the first alien guest, a cigar-shaped rock known as Oumuamua, popped up.

“It’s a puzzle why these two are so different,” David Jewitt of the University of California, Los Angeles, who led the Hubble observation team, said in a statement.

On the other hand, it’s “very remarkable” that the comet’s properties appear to be similar to those of our own solar system’s building blocks, said Amaya Moro-Martin of the Space Telescope Science Institute in Baltimore.

Polish astronomers using ground telescopes, meanwhile, have reported the comet—called Comet 2I/Borisov—looks to be reddish with a nucleus about 1 mile (2 kilometers) across.

The comet will make its closest approach to the sun in December and reach Jupiter’s distance by mid-2020, before heading back toward interstellar space. Hubble—along with other telescopes—will be on the lookout into next year.

NASA’s Hubble Space Telescope has given astronomers their best look yet at an interstellar visitor—comet 2I/Borisov—whose speed and trajectory indicate it has come from beyond our solar system.

This Hubble image, taken on Oct. 12, 2019, is the sharpest view of the comet to date. Hubble reveals a central concentration of dust around the nucleus (which is too small to be seen by Hubble).

Comet 2I/Borisov is only the second such interstellar object known to have passed through the solar system. In 2017, the first identified interstellar visitor, an object officially named ‘Oumuamua, swung within 24 million miles of the Sun before racing out of the solar system. “Whereas ‘Oumuamua appeared to be a rock, Borisov is really active, more like a normal comet. It’s a puzzle why these two are so different,” said David Jewitt of the University of California, Los Angeles (UCLA), leader of the Hubble team who observed the comet.

As the second known interstellar object found to enter our solar system, the comet provides invaluable clues to the chemical composition, structure and dust characteristics of planetary building blocks presumably forged in an alien star system a long time ago and far away.

“Though another star system could be quite different from our own, the fact that the comet’s properties appear to be very similar to those of the solar system’s building blocks is very remarkable,” said Amaya Moro-Martin of the Space Telescope Science Institute in Baltimore.

Hubble photographed the comet at a distance of 260 million miles from Earth. The comet is falling past the Sun and will make its closest approach to the Sun on Dec. 7, 2019, when it will be twice as far from the Sun as Earth.

The comet is following a hyperbolic path around the Sun, and currently is blazing along at an extraordinary speed of 110,000 miles per hour. “It’s traveling so fast it almost doesn’t care that the Sun is there,” said Jewitt.

By the middle of 2020, the comet will streak past Jupiter’s distance of 500 million miles on its way back into interstellar space where it will drift for untold millions of years before skirting close to another star system.

Crimean amateur astronomer Gennady Borisov discovered the comet on Aug. 30, 2019. After a week of observations by amateur and professional astronomers all over the world, the International Astronomical Union’s Minor Planet Center and the Center for Near-Earth Object Studies at NASA’s Jet Propulsion Laboratory in Pasadena, California, computed a trajectory for the comet, which confirms that it came from interstellar space.

Until now, all cataloged comets have come from either a ring of icy debris at the periphery of our solar system, called the Kuiper belt, or the hypothetical Oort cloud, a shell of comets about a light-year from the Sun, defining the dynamical edge of our solar system.

Borisov and ‘Oumuamua are only the beginning of the discoveries of interstellar objects paying a brief visit to our solar system, say, researchers. According to one study, there are thousands of such interlopers here at any given time, though most are too faint to be detected with current-day telescopes.

Observations by Hubble and other telescopes have shown that rings and shells of icy debris encircle young stars where planet formation is underway. A gravitational “pinball game” between these comet-like bodies or planets orbiting other stars can hurtle them deep into space where they go adrift among the stars.

Future Hubble observations of 2I/Borisov are planned through January 2020, with more being proposed.

“New comets are always unpredictable,” said Max Mutchler, another member of the observing team. “They sometimes brighten suddenly or even begin to fragment as they are exposed to the intense heat of the Sun for the first time. Hubble is poised to monitor whatever happens next with its superior sensitivity and resolution.”