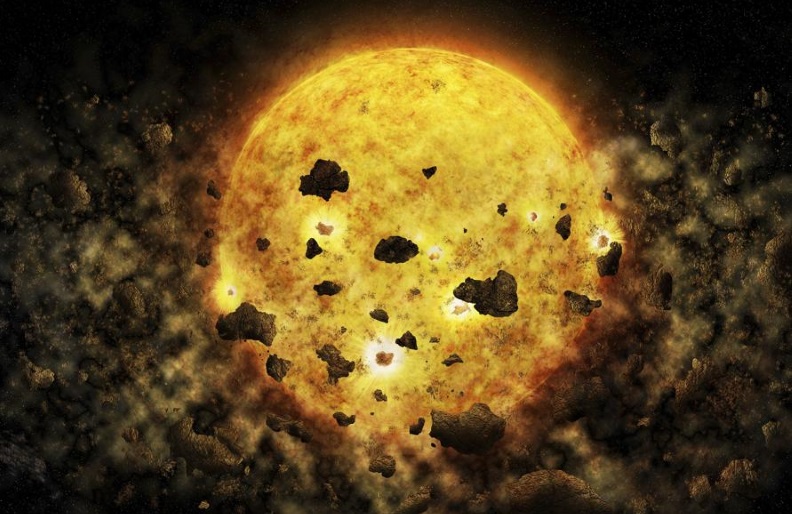 They mystery of why a young star dims every so often may have just been solved. For the first time, researchers have observed what they think may be a star hoovering up the debris after a nearby collision between two planets.

It’s not Tabby’s Star, sorry everyone. But it’s actually been puzzling astronomers for much longer – nearly a century, in fact.

It’s a young star, located about 140 parsecs (430 light-years) away in the Taurus molecular cloud, a rich star-forming region located between the northern constellations of Taurus and Auriga.

It’s called RW Aur A, discovered in 1937, and every few decades, it does something curious. It grows dimmer, for about a month, before brightening again.

In recent years, though, it’s been doing it more frequently, and for longer periods. Now data acquired by the Chandra X-ray Observatory provides evidence for what may have caused the star’s most recent dimming event.

It appears that two protoplanets may have collided as they orbited the star. When the debris from the collision fell into the star – pieces now too small to maintain enough momentum to escape the star’s gravitational pull – it created a cloud of dust that temporarily blocked some of the star’s light.

“Computer simulations have long predicted that planets can fall into a young star, but we have never before observed that,” said astrophysicist Hans Moritz Guenther of MIT’s Kavli Institute for Astrophysics and Space Research.

“If our interpretation of the data is correct, this would be the first time that we directly observe a young star devouring a planet or planets.”

And, if it’s correct, it could also explain multiple other times that RW Aur A has dimmed over the years. This has to do with the star’s age.

It’s estimated to be just a few million years old, a wee baby in star terms. At that age, stars are still surrounded by the protoplanetary disc of dust and gas that eventually coalesces into a planetary system.

There’s a lot we don’t know about this process, but our own Solar System tells us that collisions in these formative years may be fairly common.

So the explanation is a highly plausible one, especially given the data.

The star’s dimming behaviour in recent years became unusual. It dimmed in 2011 for about six months, and again in mid-2014 before returning to full brightness by November 2016. Then, in January 2017, it dimmed again.

The team was able to observe the star using Chandra at full luminosity in 2013, and while it was dimmer in 2015 and 2017, collecting almost 14 hours of observation data. This meant they could compare the changes in the spectrum between dimming and full luminosity.

“The X-rays come from the star, and the spectrum of the X-rays changes as the rays move through the gas in the disk,” Guenther said. “We’re looking for certain signatures in the X-rays that the gas leaves in the X-ray spectrum.”

They found that the two dimming events were caused by dense gas between us and the star, and that the star itself is much hotter than they expected.

They also found, after the 2017 event, that this dust had a lot more iron than had been observed in 2013.

“Here, we see a lot more iron, at least a factor of 10 times more than before, which is very unusual, because typically stars that are active and hot have less iron than others, whereas this one has more,” Guenther told MIT News.

“Where does all this iron come from?”

The team came up with two potential explanations. The first is what is known as a dust pressure trap, when dust grains stall in “dead zones” in the protoplanetary disc. When a tidal force occurs, such as RW Aur A’s binary companion star passing by, this can disrupt the dust trap, spilling the contents into the star.

The team did not think this was a high possibility. Rather, they believe it’s much more likely to be a collision between protoplanets where one or both had a high iron content.

The team hopes to conduct further observations of the star in the future, to determine if the iron content has changed. This could help calculate the size of the bodies in the implicated collision.

If the iron levels remain the same, or only a little less, that indicates a larger body; greater dissipation, on the other hand, indicates a smaller one.

“Much effort currently goes into learning about exoplanets and how they form, so it is obviously very important to see how young planets could be destroyed in interactions with their host stars and other young planets, and what factors determine if they survive,” Guenther said.

The research has been published in The Astronomical Journal.