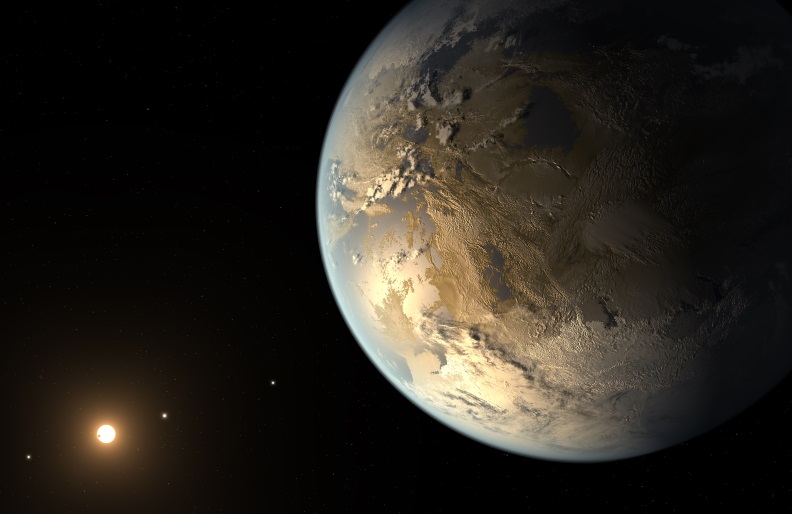 New findings suggest that some exoplanets will have stable axial tilts and climates, much as Earth does. This knowledge will help astronomers search for worlds similar to ours – the long-sought Earth 2.0.

We sometimes hear the term Earth-like in describing exoplanets that might be similar to our own world. The terms Earth-like or Earth analog conjure up visions of alien oceans and continents, teeming with life. But how similar to Earth might such distant worlds really be? We still don’t know the answer to that question yet, but a new research study – announced by the Georgia Institute of Technology on June 28, 2018 – shows that there might indeed be some alien worlds that are quite similar to Earth in terms of their seasons and stable climates.

The study focuses on two known exoplanets, one about the same size as Earth and the other a super-Earth (larger than Earth but smaller than the gas giants Uranus or Neptune). The researchers found evidence that both planets likely have seasons and stable climates, just as Earth does. Kepler-186f is less than 10 percent larger then Earth, 500 light-years away in the constellation Cygnus the Swan. It is one of five known planets in that planetary system and orbits within the habitable zone, even though its host star is a red dwarf. Kepler-62f is about 40 percent larger than Earth, 1,200 light-years away in the constellation Lyra the Harp.

The research team, led by Georgia Tech astronomer Gongjie Li and graduate student Yutong Shan from the Harvard-Smithsonian Center for Astrophysics, used computer simulations to determine the axial tilt of each planet. The results indicated that the axial tilts of both planets are stable, like Earth’s, meaning that the planets would experience regular seasons and stable climates. That is good news in terms of how habitable the planets may be, although there are other factors to account for also of course, such as water, composition, type of atmosphere, etc.

Planets with highly variable axial tilts, like Mars, are less likely to have such stable environments. Mars’ axial tilt has been very unstable, swinging from zero to 60 degrees over billions of years, and is thought to be a key reason why Mars lost most of its water and turned into the cold, dry desert world we see today.

Mars is in the habitable zone in our solar system, but its axial tilt has been very unstable – varying from zero to 60 degrees. That instability probably contributed to the decay of the Martian atmosphere and the evaporation of surface water.

Mars is a good example, then, of what can happen when a planet does not have a stable axial tilt. A stable climate has been important for the continued evolution of life on Earth. The axial variations of Earth have been largely kept in check by the Earth’s large moon, which Mars doesn’t have. Mars and Earth strongly interact gravitationally with each other. If Earth had no moon, its spin axis would precess at the same rate as the orbital oscillation, which could cause large variations in the axial tilt. As Li explained:

It appears that both exoplanets are very different from Mars and the Earth because they have a weaker connection with their sibling planets. We don’t know whether they possess moons, but our calculations show that even without satellites, the spin axes of Kepler-186f and 62f would have remained constant over tens of millions of years.

As it stands now, both Kepler-186f and Kepler-62f are candidates for having habitable conditions on their surfaces, but there is still more we need to learn about them. The mass, composition and density of Kepler-186f are still unknown, crucial factors in helping to assess habitability. As Li noted:

Our study is among the first to investigate climate stability of exoplanets and adds to the growing understanding of these potentially habitable nearby worlds.

Planets with stable climates would be more likely to be able to support life, at least as we know it on Earth. What about planets with ever-changing climates? Shan is optimistic about even those worlds:

I don’t think we understand enough about the origin of life to rule out the possibility of their presence on planets with irregular seasons. Even on Earth, life is remarkably diverse and has shown incredible resilience in extraordinarily hostile environments. But a climatically stable planet might be a more comfortable place to start.

A growing number of Earth-sized and super-Earth exoplanets have been discovered, including in the habitable zones of their stars, although it is too early to call any of them Earth-like yet specifically. This new research shows how some should have axial tilts and climates ideal for life to exist.

Bottom line: Finding other Earth-like planets is the holy grail of exoplanet research. The new findings showing stable axial tilts and likely stable climates on Kepler-186f and Kepler-62f are a big step in that direction. There is still much more work to be done, but scientists are now getting closer to discovering a world that is similar to ours – not only habitable, but perhaps, even teeming with life.