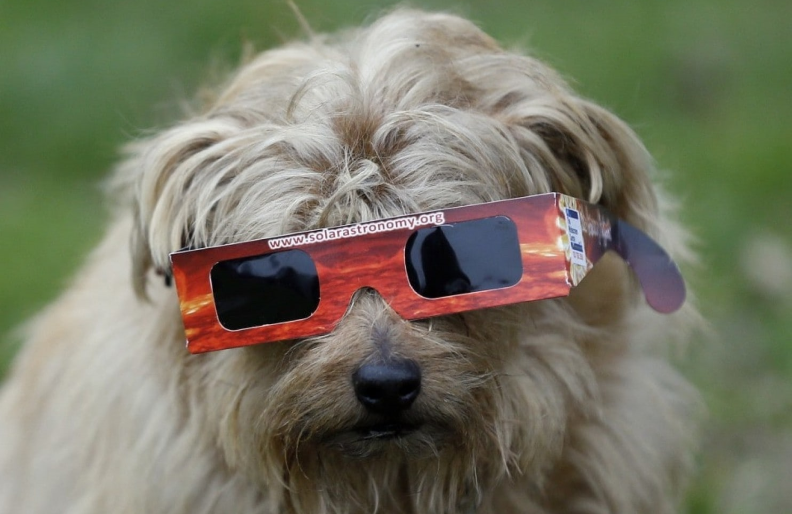 Here’s how you can help scientists gather data on this.

In 1994, Doug Duncan was standing on the Bolivian Altiplano with of group of fellow astronomers. The scientists had come to witness a total solar eclipse, and as such, most of their gazes were turned skyward as the totality approached.

That is, until a woman starting shouting, “Look down! Look down!”

“I can still hear her voice,” said Duncan, the director of the Fiske Planetarium at the University of Colorado. “So, we look down and … llamas. Llamas all over the place.”

They were surrounded by llamas – but not for long. After a few minutes, the moon’s 70-mile-wide shadow passed on and light returned to the plateau, at which point the llamas formed a sort of procession and marched away.

Duncan, who has witnessed 10 total solar eclipses, said he still has no idea where the animals came from or what their behaviour meant, if anything. But even as a scientist who knows more about space than camelids, he thought the way the llamas’ behaved was certainly weird.

Another time, in the Galápagos Islands, Duncan watched as a bunch of whales and dolphins surfaced and started cruising back and forth in front of the ship he was on about five minutes before a total eclipse.

Related: A guide to the Total Solar Eclipse on August 21

A few minutes after the sun had come back out and it was clear the world was not ending, the marine mammals disappeared, just as the Bolivian llamas had.

There are lots of these kinds of stories – anecdotal reports of animals behaving strangely in the moments leading up to and after a solar eclipse.

Some say that when the moon scoots in front of the sun and the world goes dark, as it will across the United States on August 21, birds stop singing and cows and horses start returning to their barns as though it were time for bed.

These are pretty common and consistent observations, said Angela Speck, director of astronomy at the University of Missouri.

“And it doesn’t seem to matter whether it’s happening in a rural area or a city,” she said.

But when you start looking for rigorous research on animal behaviour during eclipses, the pickings are slim. One study found that colonial orb-weaving spiders appeared to start deconstructing their webs during an eclipse in Mexico in 1991.

Another study, from 1984, noted that a group of captive chimpanzees in Georgia all seemed to congregate on a climbing structure during the totality.

But a study of rumination and grazing behaviour in cattle during Europe’s 1999 eclipse found no effect. Similarly, a group of captive baboons in Chile seemed decidedly meh about the eclipse in 1994.

The thing is, the world only gets a total solar eclipse approximately every 18 months, and the path of totality varies depending on where and when the moon crosses the sun’s rays.

This makes studying animal behaviour during an eclipse rather difficult. The best experiments require scientists to control for variables and repeat the test many times to evaluate its validity.

So even if we get some really good observations this time around of, say, moose, the next total solar eclipse won’t be until July 2019, and its path of totality drifts over Chile and Argentina, neither of which is home to moose.

All of that said, scientists are well accustomed to making the best out of imperfect study conditions. And this year, technological advances may help us gather data about eclipse-experiencing critters like never before.

In fact, scientists are hoping you might donate a little data to the cause.

All you have to do, they say, is whip out your smartphone and download the iNaturalist app. Created by the California Academy of Sciences, iNaturalist allows anyone to take a picture of an animal (or plant or fungi or whatever) and make an attempt to identify it.

Then others, including experts, weigh in on whether your ID is correct or not. Think of it as a bit like Pokémon Go, only you’re trying to “catch” real creatures instead of Charizards and Vaporeons.

On the day of the eclipse, the app will feature a special drawdown menu that allows you to record observations leading up to, during, and after the astronomical event. Simply keep an eye out for any interesting or unusual behaviour and snap a few pics while you enjoy the show.

“We’re hoping this is a way for people to be curious and make observations and think about how animal behaviour is related to the sun,” said Rebecca Johnson, citizen scientist research coordinator for the California Academy of Sciences.

What’s more, Johnson said, all of the thousands of notes resulting from this project, which they are calling Life Responds, could allow researchers to establish a baseline of behaviour that they can measure future eclipses against.

It’s only through this massive aggregation of data – which has never before been possible – that they can start to recognize patterns and draw conclusions.

“The whole idea of science, of course, is to turn something from anecdote into real data that you can study,” said Michelle Thaller, deputy director of science for communications at NASA, which is including the Life Responds project as part of its citizen science outreach in conjunction with the eclipse.

If you’re looking for places to find animals during the eclipse, here’s a list of more than a dozen wildlife refuges within the path of totality.

If getting outdoors isn’t really your thing, you can participate by going to places like the Nashville Zoo, which is encouraging visitors to log observations by using the iNaturalist app or tagging the zoo on social media with the hashtags #NashvilleZoo or #NZooEclipse.

While the zoo is home to plenty of big animals like primates and giraffes, it’s the birds that might be the most interesting.

“I don’t think anybody knows for sure what the animals will do,” said Jim Bartoo, the zoo’s marketing and public relations director, “but my bet would be to watch the flamingoes and the rhinoceros hornbills.”

Bartoo said the zoo’s avian staff thinks the birds may be more affected than other animals because they’re used to being brought inside as the sun sets.

And while zoo animals obviously aren’t perfect substitutes for understanding the behaviour of their wild counterparts, the eclipse offers an opportunity to study animals that have become used to the rhythms of captivity.

The zoo’s rhinoceroses, for instance, come outside each day at 9 am and return to their paddock each night at 6 pm. Who knows how they’ll react to a few minutes of unscheduled darkness?

Of course, it’s entirely possible that the squirrel, blue jay, rattlesnake or rhino you’re watching doesn’t do a darn thing when the big moment comes. Don’t worry, but do take notes.

After all, logging the absence of weird behaviour is important to science, too. (Good news: You don’t even have to be in the line of totality to log animal behaviour observations.)

One thing all the experts agree on is that if you’re going to attempt to watch the solar eclipse this month, be sure to wear proper eye protection. But don’t worry about getting a pair of glasses for Fido.

“Animals are actually quite a bit smarter than we are when it comes to looking directly at the sun,” says Thaller.