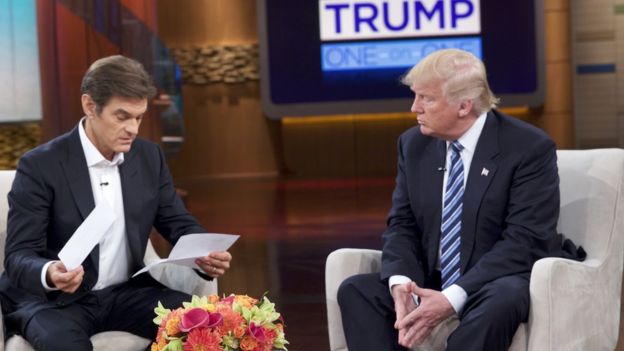 The Republican nominee Donald Trump is in “excellent physical health,” according to a letter from his doctor.

Mr. Trump discussed his health with talk-show host Dr Mehmet Oz in a taped interview, which is set to be broadcast on Thursday.

It’s almost too perfect. The reality-TV-star-turned-politician sharing his medical information with the celebrity-doctor-turned-daytime-talk-show-host.

Mr. Trump promised he would release information from a physical exam some time this week and on Thursday – in a press release and a taped interview with Dr Mehmet Oz – he did.

We learned that Mr. Trump’s vital signs are normal. He takes medication to keep high cholesterol in control. He passed all his cancer screenings. He (perhaps not surprisingly) has higher than normal testosterone levels. He’s a bit overweight and has a penchant for junk food. He says his exercise regimen consists of golf and giving political speeches.

Bornstein is the quirky man, who made headlines last December when he claimed Mr. Trump would be “the healthiest individual ever elected to the presidency”. Bornstein later admitted he wrote that one-page, typo-ridden memo in less than five minutes.

He first revealed the letter, which is dated 13 Sept, in his appearance on The Dr Oz Show.

“I feel as good today as I did when I was 30,” Trump said on the show, according to a clip.

Dr Bornstein, a gastroenterological specialist at Lenox Hill Hospital in New York, has cared for Mr Trump since 1980, according to the letter.

The note continues to detail parts of Mr Trump’s medical record, including that he was only in hospital once at age 11 for an appendectomy.