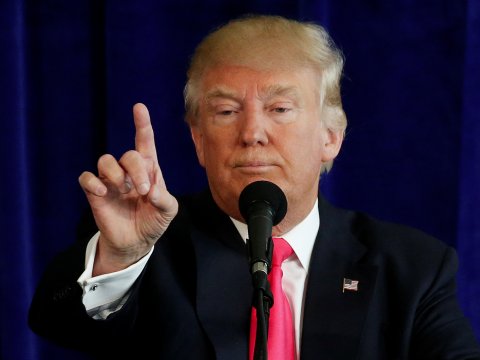 Donald Trump has called for US law enforcement to use racial profiling to combat domestic terrorism in the wake of this weekend’s bombings in New York and New Jersey – and a multiple stabbing at a Minnesota mall, for which Isis has claimed responsibility.

“Our local police, they know who a lot of these people are. They are afraid to do anything about it because they don’t want to be accused of profiling,” Mr Trump told Fox News in a phone interview on Monday morning, shortly before New York police arrested 28-year-old Ahmad Khan Rahami, a naturalised US citizen born in Afghanistan, in connection with the bomb attack that injured 29 people in Manhattan on Saturday.

“If somebody looks like he’s got a massive bomb on his back we won’t go up to that person and say, ‘I’m sorry,’ because if he looks like he comes from that part of the world we’re not allowed to profile,” Mr Trump went on, adding: “We’re trying to be so politically correct in our country.”

The GOP presidential nominee praised the Israeli authorities for their “unbelievable” anti-terror policing, referring to the regular roundups of potential suspects by the country’s security forces. “You know in Israel, they profile,” Mr Trump said. “They’ve done an unbelievable job… They see somebody that’s suspicious. They will profile. They will take that person in.”

It is not the first time the property mogul has called for racial profiling, nor the first time he has praised Israel’s police practices during his presidential campaign. Mr Trump has also at different times urged a ban on all Muslims entering the US, and a more targeted ban on visitors from conflict areas such as Syria and Libya.

On Monday, the Republican described Muslim refugees legally resettled in the US under the Obama administration as a “cancer from within” that would foster domestic terror. “They stay together. They’re plotting,” he insisted.

Mr Trump had been widely criticised for describing Saturday’s explosion in New York as a bomb before the authorities confirmed the cause of the blast. At a rally in Colorado on Saturday, he told supporters that “a bomb went off in New York.” On Monday, he boasted of having characterised the incident correctly. “What I said is exactly correct. I should be a newscaster because I called it before the news,” he told Fox News.