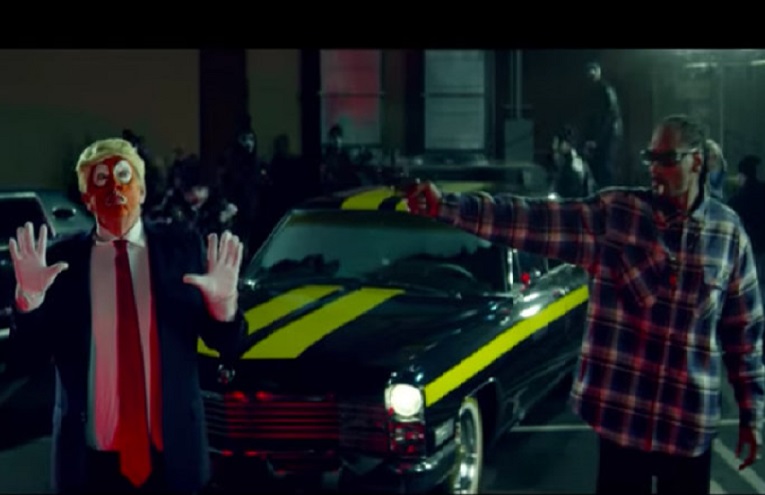 A satirical music video featuring the rapper Snoop Dogg and a clown called Ronald Klump is the latest piece of pop culture drawing the attention and ire of President Trump.

On Wednesday, in yet another of his trademark early morning Twitter bursts, the president took the extraordinary step of invoking “jail time!” in response to the clip, which depicts Snoop Dogg pointing a toy pistol toward the Klump character. When the rapper pulls the trigger, a sign that says “bang” drops from the barrel in the style of classic prank guns; Klump is later shown in chains.

President Trump, amid tweets about the release last night of his 2005 tax returns and a planned rally in Nashville tonight, wrote:

Can you imagine what the outcry would be if @SnoopDogg, failing career and all, had aimed and fired the gun at President Obama? Jail time!

Snoop Dogg joins the ranks of “Saturday Night Live” and the actress Meryl Streep, which have been highly critical of President Trump and become targets of his displeasure — and media criticism — on social media. (While Snoop Dogg was “failing,” in the estimation of the president, Ms. Streep was “one of the most overrated actresses in Hollywood.”)

Critics have noted that President Trump often picks entertainment-world battles as political controversies are bubbling — in this case, a rare look at his finances spurred by the disclosure of his 2005 federal tax return forms on Rachel Maddow’s MSNBC show Tuesday night.

A representative for Snoop Dogg did not immediately respond to a request for comment.

The music video, for a remix of the song “Lavender” by the jazzy hip-hop jam band BadBadNotGood, began drawing outrage from conservative media and politicians earlier this week after its release on Sunday. “We’ve had presidents assassinated before in this country, so anything like that is really something that you should be very careful about,” the Republican Senator Marco Rubio told TMZ.

Snoop Dogg, who took off as an early gangster rapper but has become an advocate against gun violence later in his career, addresses police killings of black men in his verse on the song. In an interview with Billboard before the controversy over the video took off, the rapper said there were “a few issues that we really wanted to lock into [for the video] like police, the president and just life in general.”

“When I be putting [expletive] out, I don’t ever expect or look for a reaction,” he said. “I just put it out because I feel like it’s something that’s missing. Any time I drop something, I’m trying to fill in a void. I feel like it’s a lot of people making cool records, having fun, partying, but nobody’s dealing with the real issue with this [expletive] clown as president.”