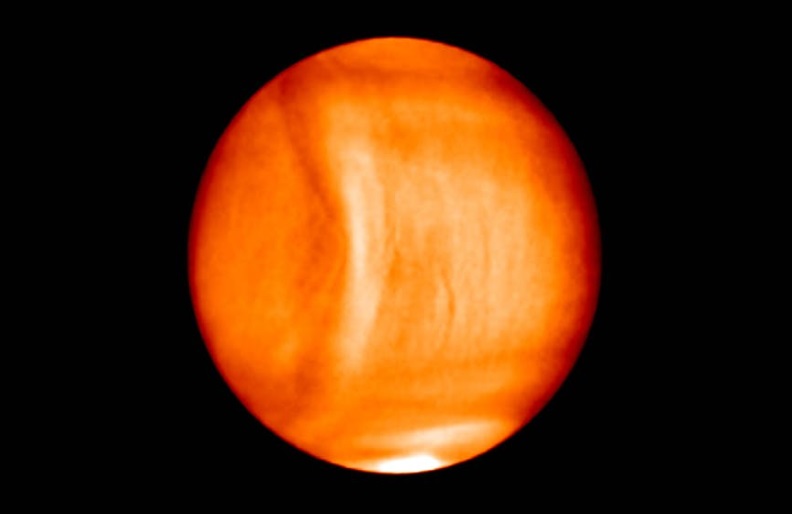 A mysteriously fluctuating bulge observed in the atmosphere of Venus now has a more concrete explanation. According to a newly published study, the planet’s enormous mountain ranges are to blame for a massive gravity wave.

Venus is often called Earth’s sister planet because of the similarities between the two. If it’s a twin, though, it’s an evil one – its environment is about as different from Earth as one imagines a rocky planet can get.

One of those differences is a giant bow-like structure 10,000 kilometres wide that comes and goes from the upper atmosphere of Venus. It was first spotted by Japanese Venus orbiter Akatsuki in 2015, and spends days at a time staying perfectly still within Venus’s otherwise turbulent atmosphere.

Venus is peculiar in many ways. It has a retrograde rotation – meaning it, like Uranus, rotates in the opposite direction to the rotation of the Sun, unlike most planets in our Solar System. It also rotates extraordinarily slowly; one day on Venus is around 243 Earth days.

Venus’s atmosphere, however, rotates around 60 times faster than the planet itself, making a full turn once every four days.

This crazy motion results in winds of up to 400 kilometres per hour (around 250 miles per hour). The phenomenon is called superrotation, and it would seem to preclude the existence of four-day stationary gravity waves like the massive bulge astronomers saw.

“Over several days of observation, the bow-shaped structure remained relatively fixed in position above the highland on the slowly rotating surface, despite the background atmospheric superrotation,” Japanese researchers wrote in the 2017 paper that described the wave for the first time.

“We suggest that the bow-shaped structure is the result of an atmospheric gravity wave generated in the lower atmosphere by mountain topography that then propagated upwards.”

Now, according to planetary scientist Thomas Navarro and colleagues from the University of California Los Angeles, that analysis is right on the money.

We already knew that the wave appeared right above the 4,500-metre-high (14,764 feet) Aphrodite Terra mountain range near the planet’s equator – so it did seem like the most likely explanation.

But to confirm it, Navarro and his team created and ran computer simulations of the planet and its atmosphere. And the results of their simulation were in “a remarkable agreement with the observations over four Venus solar days from 2015 to 2017,” they wrote in their paper.

In addition, the team found that these waves could have an effect on the planet’s rotation, causing fluctuations in the atmospheric pressure that ultimately slow the rotation.

This effect is minute, just a few minutes per Venusian day – but it could help explain previous discrepancies in measurements of Venus’ rotation rate, such as a 2012 ESA study that found a 6.5 minute difference compared to a previous measurement.

Scientists don’t know why Venus rotates so slowly, or why it has a retrograde rotation. One hypothesis for the former is friction from the dense atmosphere, so it’s not entirely outside the realm of possibility that the gravity wave can have an effect on rotation.

There are other things we don’t know about Venus, too, which we could learn by figuring out the precise length of a Venusian day, according to the team.

“An accurate measurement of the length of day could detect the various impacts of the atmospheric flow against mountains,” the researchers wrote.

Once scientists have a tighter grasp on these mechanisms, it could help them figure out a way to probe the interior of the planet, discover the nature of its core, and ultimately figure out what’s sustaining Venus’s bizarre superrotation.

The paper has been published in Nature Geoscience.