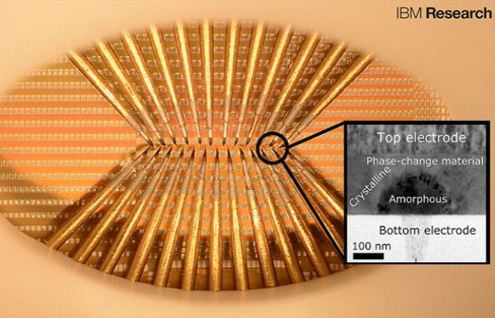 Despite all the advances in the development of computers, the human brain remains the most complex, sophisticated and powerful “computer” that exists for decades scientists seek to replicate its processing mechanisms in a system that can use the machines.
The company IBM is one of the largest and najstrastveni advocates developing cognitive computers – they presented in 2011. Watson, the first cognitive system in the world which, rather than being programmed for everything he is capable to learn through interaction with people and the environment. Last year created a system called TrueNorth, which is a network with 48 million connections – it is similar to the computing power that has a brain of a mouse, and earlier this year they managed to store 3 bits in each cell of phase change memory, memory 50 times faster than the built-in flash drives.

Now, scientists at IBM in Zurich designed artificial neurons from materials that can make a difference, such as germanium antimony Telluride. These materials may be amorphous or crystalline state and are the same used for the manufacture of optical discs.

These artificial neurons can perform complex calculations and quick to learn while using very little energy, much like the human brain. Their test consisted of billions of “inclusion” and “exclusion” of electrical impulses that simulate the situation in which they found themselves after a few years of operation.

This should allow a new generation of neuromorphic computer systems with extreme density.