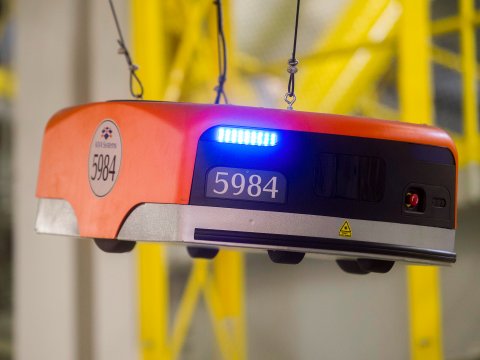 It wasn’t until 2014 that Amazon really started to use the machines made by Kiva, the robotics company it bought for $775 million in 2012. Kiva makes robots that automate the picking and packing process at large warehouses.

But in the short two years they’ve been deployed across Amazon’s warehouses, Kiva’s robots have been a real cost saver, according to a new note published by Deutsche Bank on Wednesday.

The note says Kiva robots have cut operating expenses by about 20%, quoting Amazon exec Dave Clark, adding that it would translate to roughly $22 million in cost savings for each fulfillment center.

The cost savings are mostly derived by simply improving warehouse efficiency. The note says cycle times have been cut from 60 to 75 minutes to roughly 15 minutes after deploying Kiva robots, while inventory space grew 50% due to smarter use of space, such as building narrower isles or getting rid of certain handling systems.

And it’s safe to say Kiva will play an even bigger role at Amazon, as it continues to expand to other markets in Asia, the note said.

“In our vision for Amazon’s future fulfillment footprint, we see Kiva robots playing a much bigger role in improving efficiency if mega-fulfillment centers are deployed in Asia,” Deutsche Bank wrote.

In case you haven’t seen the Kiva robot, it’s a square-shaped, yellow machine that runs on wheels. They’re about 16 inches tall and weighs almost 320 pounds. They can run at a steady 5 mph and haul packages weighing up to 700 pounds.

The video below gives a good look at how it works at Amazon’s warehouse facilities:
[embedyt] http://www.youtube.com/watch?v=quWFjS3Ci7A[/embedyt]
Source: www.businessinsider.com