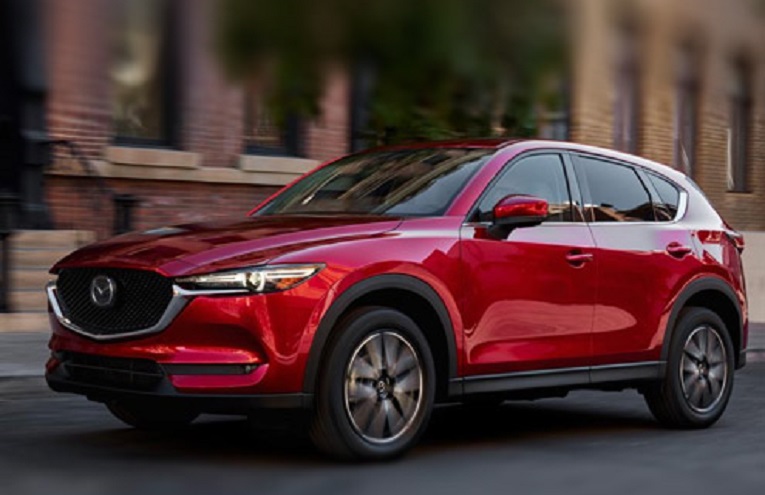 The all-new 2017 Mazda CX-5 could shake up the world of small and compact luxury SUVs. Mazda largely retained the sporty handling that made the first-generation so enjoyable, but the car company has made big improvements with noise isolation, ride comfort, and interior quality.

When it arrived for 2013, the original CX-5 carved out a niche among small SUVs as the driver’s option, with its nimble handling, taut ride, and responsive 2.5-liter four-cylinder.

It was fun to drive but not necessarily fun to come along for the ride. The interior was more basic than plush, and the mix of engine, road, and wind noise made for a loud cabin.

Mazda seems to have listened—the 2017 Mazda CX-5 is a far more relaxing place to spend time, whether driving or not. 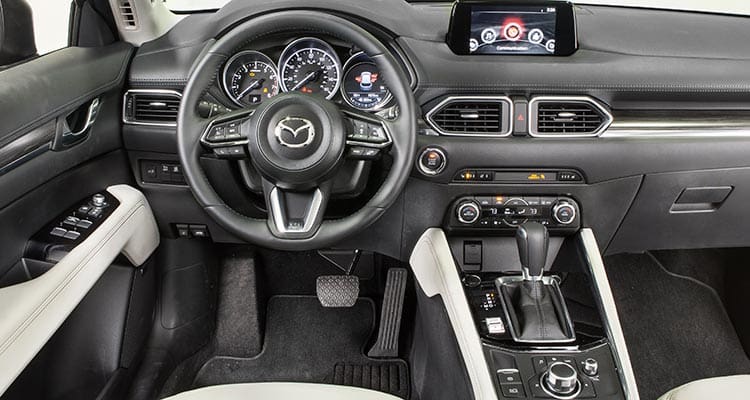 Power comes from a 187-hp, 2.5-liter four-cylinder, the only engine available on this model. The engine, mostly carried over from the previous CX-5, does the job well. The six-speed automatic, also carried over and the only version available, is unremarkable—neither the smoothest nor the clunkiest in the segment.

Mazda will offer front- and all-wheel-drive versions, with fuel economy rated by the Environmental Protection Agency at 27 and 26 mpg combined, respectively, on regular gas. In our tests of a 2014 CX-5 with the 2.5-liter engine and all-wheel drive, we got 25 mpg overall. A 2.2-liter, four-cylinder diesel engine will be available in the fall, and it its marketing will focus more on performance than fuel efficiency.

On the road it’s clear that the suspension has been changed for greatly improved ride comfort. Where the last generation was stiff, with short, quick ride motions and underlying choppiness, the redesigned Mazda CX-5 has a firm, absorbent ride that’s steady and well-controlled.

Point the CX-5 into a corner and it willingly follows the chosen path. It steers nicely and imparts a feeling of confidence.

Shoppers may hear the Mazda salesperson talk about G-Vectoring Control as a way of positioning the CX-5 as better than the competition. The system limits engine torque ever so slightly just before entering corners to keep the SUV balanced and prevent the driver from making midcorner steering adjustments.

Noise abatement was another big focus of the redesign, and major fixes such as the addition of carpeting in the cargo area, dual door seals, a thicker windshield, and acoustic glass for the front windows have yielded a quieter cabin. This, in turn, gives the CX-5 a more refined, grown-up feel.

The CX-5 Grand Touring we rented from Mazda was beautifully fitted, with comfortable armrests and soft-touch panels, chrome trim, and high-quality plastics throughout. It’s a far cry from the dour, cheap-feeling interior from previous model years.

Seat comfort was very good, with the standard power lumbar (optional on the Touring trim) adjustment adding to the already supportive seats. Drivers are well-positioned to access controls and buttons without unnecessary reaching or lifting their back off the seat. Visibility to the front and sides is good, though the rear three-quarter view is challenged by the downward-sloping roof.

The rear seat is roomy enough though not as generous as those in the Subaru Forester or all-new Honda CR-V. Wider-opening doors make it easier for both kids and adults to climb ihttps://differentimpulse.com/wp-admin/post-new.phpnside. It’s a comfortable space, with backrests that can recline slightly.

Infotainment and connectivity tasks are handled by Mazda’s standard entertainment system, which uses a central rotary knob and a touch screen—though the screen is locked out as soon as the car starts moving. Overall, the system takes some time to get used to. It’s daunting at first, and the submenu structure—for tasks such as moving or deleting audio presets—is quite convoluted.

On the safety front, Mazda has made low-speed automatic emergency braking standard ohttps://differentimpulse.com/wp-admin/post-new.phpn all versions of the CX-5 as part of its Smart City Braking System—a move that we applaud. The full-speed system is standard on the Grand Touring, and it’s available as part of the $625 i-Activesense package on the midlevel Touring trim. Blind-spot warning is standard on the Touring and Grand Touring but not available on the base Sport trim.

The optional head-up display, part of the $1,830 Premium Package on the Grand Touring, has a robust, full-color display that includes navigation commands, active safety information, cruise control, and speed information.

Cargo room hasn’t changed significantly with the redesign, although the load floor is now almost flat. Grand Touring versions get a power liftgate, which is optional on the Touring.

Following the introduction of the Honda CR-V in late 2017, the all-new 2017 CX-5 is a unique model. Although it isn’t necessarily as sporty as the Ford Escape, our limited driving experience shows it to be more enjoyable to drive than almost every other small SUV on the market. With the quieter, more upscale interior, the popular CX-5 will appeal to an even wider audience. And a loaded Grand Touring, which should come in under $33,000 before destination charges, could be a viable alternative to buyers who were considering a luxury compact SUV like the smaller Audi Q3, BMW X1, or Buick Encore.

We’ll be buying our own CX-5 soon, so check back for updates and final results from our testing.