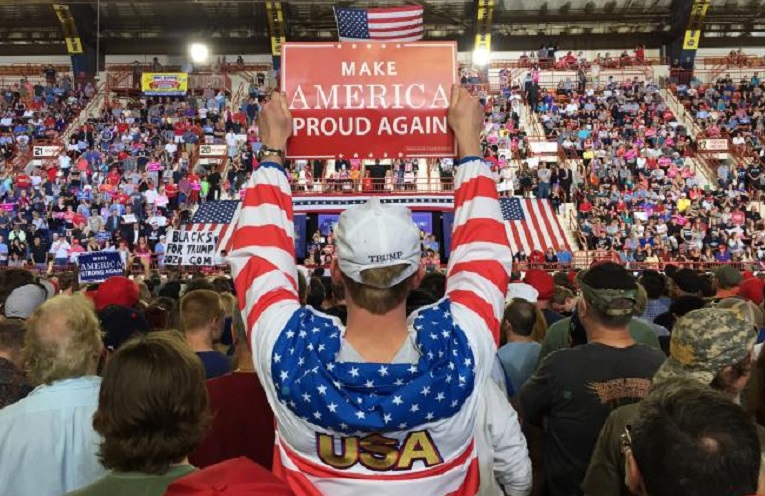 AS NEARLY 10,000 Americans await the arrival of their beloved President inside a farm show arena, the loud speakers are blaring.

It’s an eclectic soundtrack. There’s a bit of Elton John, a touch of Adele and even some Celine Dion for good measure.

But perhaps it is the choice of The Rolling Stones’ You Can’t Always Get What You Want that is most fitting. 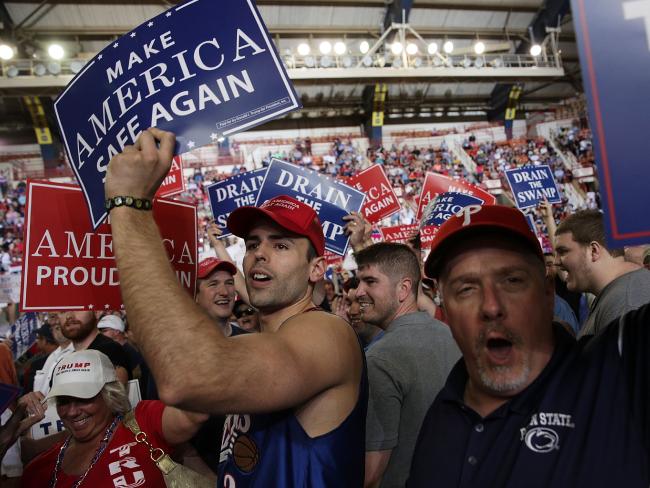 Because the people here — America’s most ardent Donald Trump supporters — don’t mind that he hasn’t been able to fund his Mexico border wall, repeal Obamacare or cut taxes within his first 100 days, as promised. They know that he’s been obstructed at every turn by the Washington machine.

What matters to them is that they finally have someone speaking their language inside the White House. Someone who is putting America first. Someone they believe is truly making America great again.

Welcome to the church of Trump, where being called “deplorable” is a badge of honour. I’m inside the Pennsylvania Farm Show Complex and Expo Center, the massive concrete barn where Mr Trump chose to celebrate his 100th day in office. It sits in the city of Harrisburg, Pennsylvania, a state few believed the President could win. 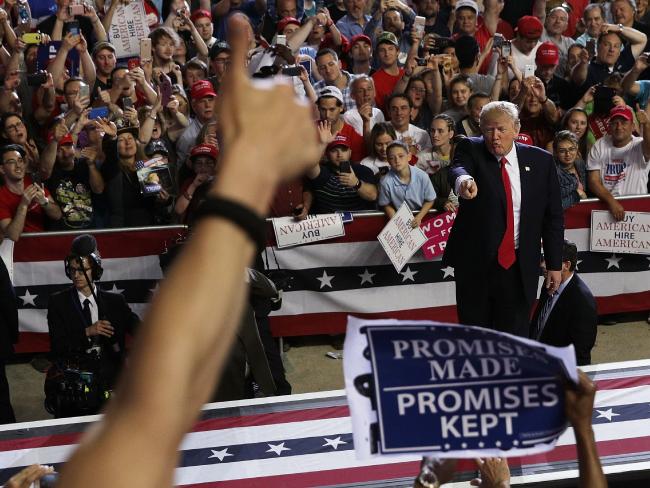 Supporters here are proud to say it’s the state that “put him over the top”.

Outside the arena there are protesters calling for Mr Trump’s impeachment, but they are almost outnumbered by the number of stalls selling Trump souvenirs, which include “Bomb the s*** out of ISIS” T-shirts, “lock up Hillary” caps and “Hello, I am deplorable” onesies.

Inside, the stars and stripes festoon the room and every other crowd member wears a red “Make America Great Again” cap. They hold aloft signs that say “Make America safe again”, “Make American proud again” and “Drain the swamp” 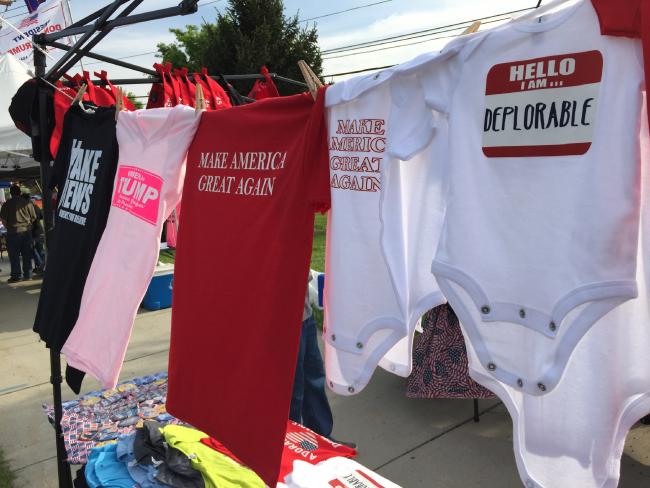 And as you speak to the audience members, you learn how much these phrases have resonated with ordinary Americans. They are not just catchy political phrases; they are the words they’ve been waiting to hear for decades.

Often, the event feels more like a baseball match than a political rally. The anticipation for Mr Trump’s appearance is palpable, and the room explodes when he takes to the stage.

Seeing the President speak up close illuminates how he managed to charm and scare enough Americans into voting for him.

He is a master showman. Whether it’s through gags — “I could not possibly be more thrilled than to be more than 100 miles from away Washington” — or fearmongering — “lax vetting [of immigrants and refugees] has threatened your family’s safety and security” — Mr Trump plays the crowd like a Stradivarius.

Mention of Barack Obama? That gets a boo. “The media”? Bigger boo (and a cry of “CNN sucks”). “Hillary Clinton”? A room-filling boo. And not only that. The crowd erupts in a spontaneous chant of “Lock her up! Lock her up!”

Trump rips into the media at Pennsylvania rally. @newscomauHQ pic.twitter.com/Jxd6BtuvZO

Among the legions of Trump devotees is Logan Sechrist, a big, tattooed man proudly wearing a T-shirt that screams “Donald f***in’ Trump”.

“He’s an unorthodox president, but that’s cool,” the Jonestown, Pennsylvania, resident tells me.

“He’s somebody who’s not afraid to say what’s on his mind and doesn’t care about whose feelings you hurt. I’m like that too.” 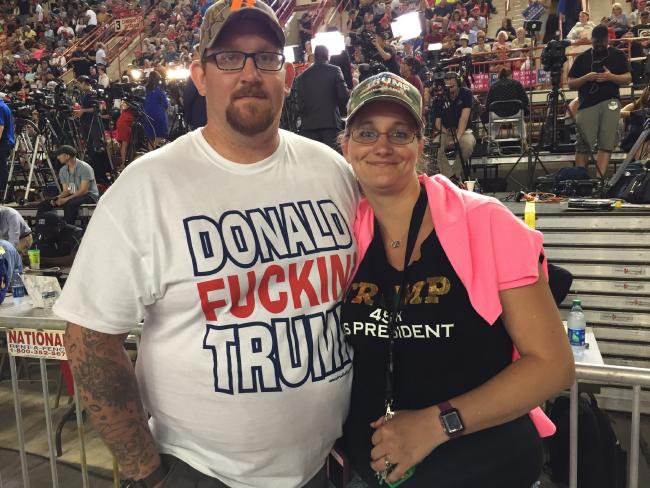 “We love our President,” his girlfriend Brittany Boltz chimes in.

“I think he has done more in 100 days than any president before him.”

So how would they respond to the critics who say Mr Trump is unfit for the presidency?

“They should grow a set,” Brittany says.

Logan concurs. “Stop trying and just sit back and enjoy the ride,” he says with a grin. 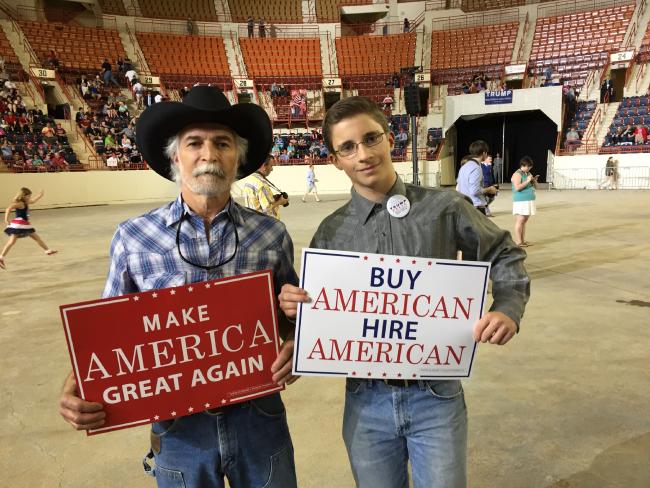 Bill Palmer and his 14-year-old son were at the arena last year when Trump was campaigning and they are proud to be back to welcome him as the most powerful man in the world.

Mr Palmer, in cowboy hat and boots, works in the construction business, like Mr Trump, and is pleased the President wants ‘t to create more jobs for Americans in the sector.

“He’s a leader and a businessman, not a politician. He knows what we’re thinking,” says Mr Palmer, who cites the confirmation of Neil Gorsuch to the Supreme Court as Mr Trump’s biggest achievement. 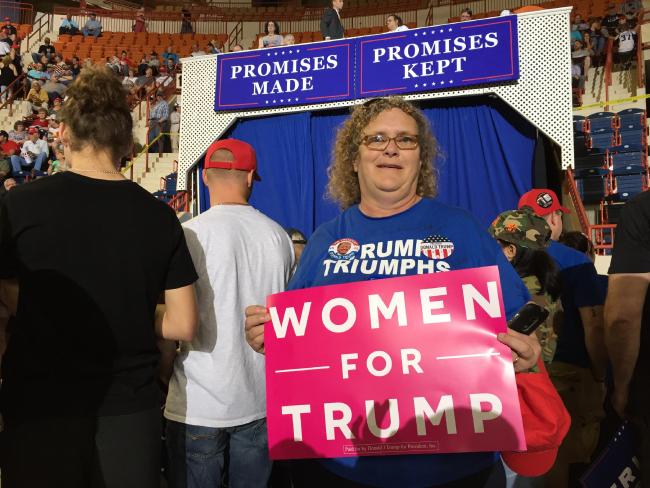 While there is testosterone in the air at the rally, women are equally proud of their president.

A softly spoken Lisa Stroup tells me that she thinks Trump is “awesome” because he’s a president who prays.

“America was so down in the dumps for so many years. He’s gonna make changes,” she said.

Jerry Dobihal of Baltimore holds aloft a card that he’s asking every Trump supporter he can find to sign.

The card reads “My president skipped dinner to give us our dessert”.

He’s referring to how Mr Trump chose to give the middle finger to Washington’s media elite by declining an invitation to speak at the White House Correspondents Dinner on Saturday night. Instead, he chose to spend his 100th day in office preaching to the converted in Harrisburg.

“I think that’s noble,” Mr Dobihal said. “It’s something no other president has done. We want to let him know we love him.” 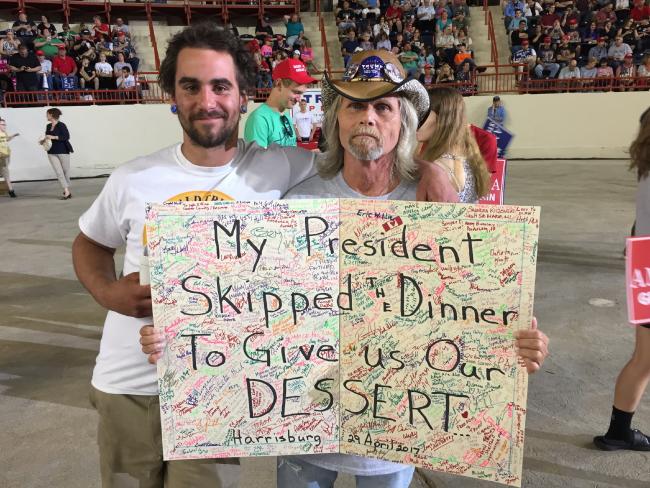 Mr Dobihal has been most impressed with Mr Trump’s “stamina” during his early tenure as president.

“He’s got the Democrats, the federal courts and even the Republicans against him, but he just keeps grinding and grinding,” he says.

Mr Dobihal has been most impressed with Mr Trump’s “stamina” during his early tenure as president.

“He’s got the Democrats, the federal courts and even the Republicans against him, but he just keeps grinding and grinding,” he says. 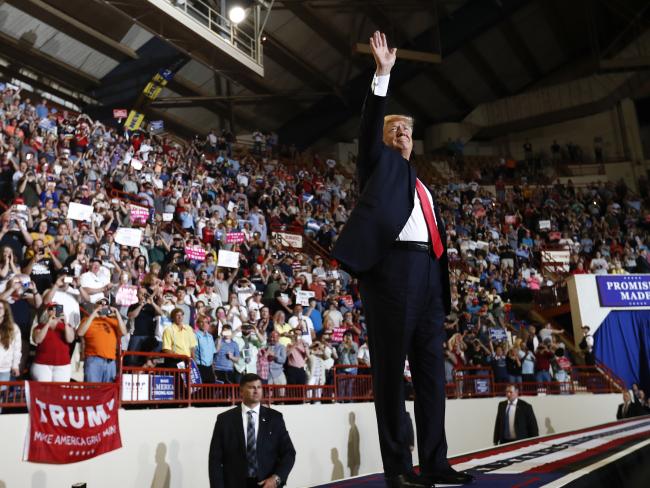 His words were barely audible over the audience’s cheers by the end. There were fist pumps, chants of “USA! USA! USA!” and a wave of elation washed over the crowd.

Donald Trump thanks his supporters after his Pennsylvania speech. @newscomauHQ pic.twitter.com/Ws61DXh5vW


Regardless of your politics, it’s hard to conceive of a crowd of Australians getting this fired up over anything, let alone what is essentially a political event. I don’t even think a footy final would do it.

But here in Pennsylvania, this crowd is ecstatic. Because they’ve just heard from the man who they believe will be their nation’s saviour.