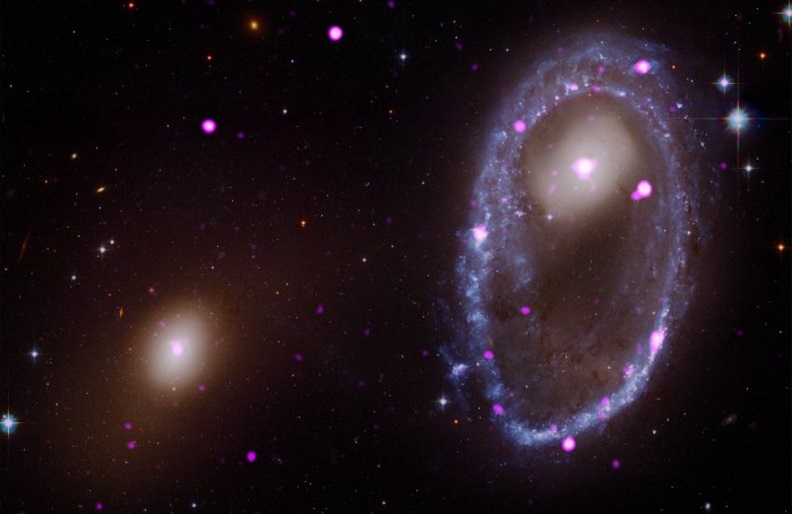 There are many strange galaxies out there in space, but about 300 million light-years away is one that’s really something. It’s called AM 0644-741, or the Lindsay-Shapley Ring, and it’s what is known as a ring galaxy – shaped like a ring, with a darker region in the centre.

Now astronomers have studied AM 0644-741 with an X-ray telescope to reveal some of the strange dynamics that are at play – which in turn offer clues as to how the galaxy got that way.

It’s thought that the shape of ring galaxies happens when one galaxy punches through another, leaving a hole in its wake. By combining X-ray data from Chandra with visible-light data from the Hubble Space Telescope, astronomers in Italy and the US have now been able to piece together that process.

The X-ray data from Chandra revealed a ring of incredibly powerful X-ray sources in the galaxy. They believe the most likely explanation for these is that they are binary systems powered by either a stellar-mass black hole, or a neutron star.

And therein lies the clue.

When one galaxy collides with another, there isn’t a lot of actual “colliding” going on. Galaxies are mostly made up of empty space, so the chance of one object hitting another is incredibly small.

But the gravitational interactions can get pretty intense; as one galaxy passes through the other, this disruption sends waves rippling through the second galaxy, creating an expanding ring of gas. As this gas compresses, star formation is triggered.

The biggest of these new stars will burn very hot, and very bright, and have very short lives, with spectacular ends: supernova explosions, leaving behind either a small black hole or a neutron star.

And, if these black holes or neutron stars have binary companions, they’ll slowly devour them, via an accretion disc that heats up with the friction of all that gas swirling together. This glows brightly in X-ray wavelengths.

But the objects in AM 0644-741 aren’t just regular old X-ray sources. They’re ultraluminous X-ray sources – ones that can produce hundreds to thousands of times more luminous X-rays than ordinary binary star systems with a neutron star or black hole in the pair.

It’s not known why these sources are so powerful. We do know that they can be either black holes or neutron stars, but not what is so special about them.

One hypothesis is that they can be produced by the mysteriously missing intermediate-mass black holes, between 1,000 and 100,000 stellar masses; but since we’ve never observed a neutron star higher than 2.3 stellar masses, that indicates a high mass isn’t necessarily required for an ultraluminous X-ray source.

Other explanations include black holes that are rapidly growing as they accrete matter; bright supernova remnants; or emission beams that appear bright due to the relativistic effects of travelling at near light-speed.

But none of that is known about the ultraluminous X-ray sources in AM 0644-741. They could all be black holes, or all neutron stars, or a mixture of both.

If you look at the X-ray data, you’ll also see that there’s a strong X-ray source in the centre of the galaxy. This is a growing supermassive black hole at the galaxy’s core. And in the optical image, there’s another galaxy in the lower left – this could be the one that punched through AM 0644-741.

So there seems to be some mechanism peculiar to ring galaxies that’s producing really, really bright X-ray objects. But – of course – further research will need to be conducted to figure out what they are.

The team’s research has been published in The Astrophysical Journal, and can be read in full on arXiv.