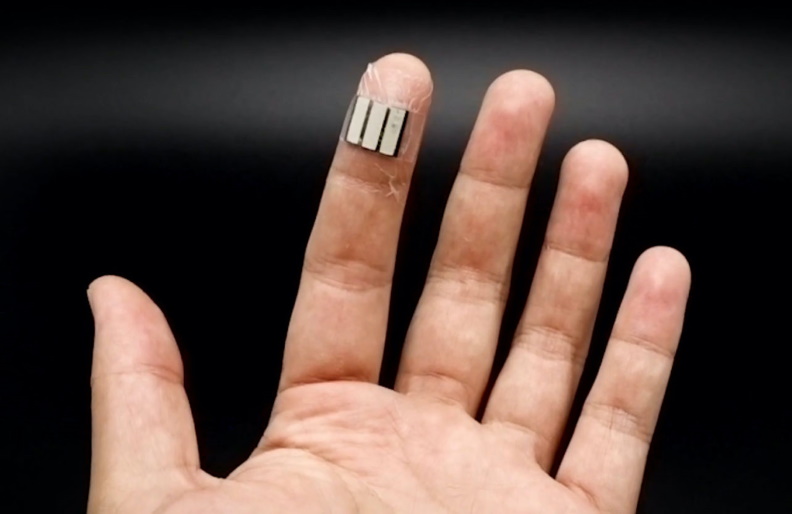 Generate electricity while interacting with your favorite games and apps.

Engineers at the University of California San Diego have developed a wearable device that generates power when touched or sweated on, potentially opening up new opportunities for smaller electronics, including maybe VR technology.

In a paper entitled A passive perspiration biofuel cell: High energy return on investment, the team goes into detail regarding the potentially game-changing wearable. The thin, flexible device is worn around the users’ fingertip and collects small amounts of sweat via an absorbant padding composed of carbon foam electrodes. These electrodes feature special enzymes that activate a unique chemical reaction between lactate and oxygen molecules which, in turn, generates small amounts of electrical power.

“The reason we feel sweatier on other parts of the body is that those spots are not well ventilated,” said Lu Yin, a nanoengineering student at the UCSD Jacobs School of Engineering and co-author of the report. “By contrast, the fingertips are always exposed to air, so the sweat evaporates as it comes out. So rather than letting it evaporate, we use our device to collect this sweat, and it can generate a significant amount of energy.”

What sets this wearable apart from other sweat-powered devices is that it doesn’t require any special effort on the part of the user in order to work. The BAND-AID-like device is capable of generating power even when you’re sitting still, further expanding its potential as a portable power generator.

According to the team, biofuel cells located in the wearable are capable of harvesting ∼400 mJ/cm2 of energy during sleep; enough to power something like a digital (non-smart) wristwatch. In addition to sweat, piezoelectric generators allow the user to generate additional energy with light finger presses.

“We envision that this can be used in any daily activity involving touch, things that a person would normally do anyway while at work, at home, while watching TV or eating,” added Joseph Wang, senior author of the paper and a professor of nanoengineering at the UCSD Jacobs School of Engineering. “The goal is that this wearable will naturally work for you and you don’t even have to think about it.”

While this fingertip-powered wearable could no doubt be used in combination with a number of technologies, one of the most obvious use-cases would be VR. The inherent physicality of VR technology makes it the perfect candidate for a device that quite literally runs on sweat, especially when paired with physically exhausting experiences such as Beat Saber, Supernatural, and GORN.

VR would also make great use of the energy generated via light finger presses. Theoretically, you could power a VR experience as you played by simply interacting with the in-game world using your motion controllers.

“Compare this to a device that harvests energy as you exercise,” Yin added. “When you are running, you are investing hundreds of joules of energy only for the device to generate millijoules of energy. In that case, your energy return on investment is very low. But with this device, your return is very high. When you are sleeping, you are putting in no work. Even with a single finger press, you are only investing about half a millijoule.”

That being said, the technology is still in its infancy and therefore limited in regards to the amount of power its capable of generating. In its current state, the device could power something like a digital wristwatch. According to the team, it’ll take some time before the wearable can support more powerful electronic devices, such as a smartphone or VR headset.

You are, however, able to attach multiple devices to your hand at once, allowing you to generate more power in a shorter period of time.

Perhaps VR technology would benefit more from a sweat-powered glove, one designed to support multiple fingertip devices and better collect sweat as the user interacts with the in-game world. Of course, you could always head straight to the source and implement carbon foam padding directly into the headsets’ face pad for maximum sweatiness.

For more information on the project check out the full paper on Joule.

This article was originally published on VRscout by Kyle Melnick