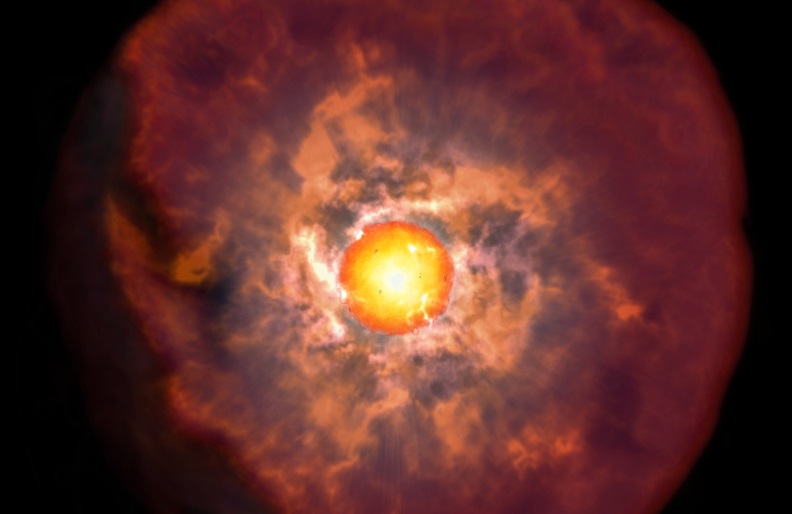 At the end of its life, a red supergiant star explodes in a hydrogen-rich supernova. By comparing observation results to simulation models, an international research team found that in many cases this explosion takes place inside a thick cloud of circumstellar matter shrouding the star. This result completely changes our understanding of the last stage of stellar evolution.

The research team led by Francisco Förster at the University of Chile used the Blanco Telescope to find 26 supernovae coming from red supergiants. Their goal was to study the shock breakout, a brief flash of light preceding the main supernova explosion. But they could not find any signs of this phenomenon. On the other hand, 24 of the supernovae brightened faster than expected.

Moriya explains, “Near the end of its life, some mechanism in the star’s interior must cause it to shed mass that then forms a layer around the star. We don’t yet have a clear idea of the mechanism causing this mass loss. Further study is needed to get a better understanding of the mass loss mechanism. This will also be important in revealing the supernova explosion mechanism and the origin of the diversity in supernovae.”

These observations were performed by the Blanco Telescope at Cerro Tololo Inter-American Observatory during six nights in 2014 and eight nights in 2015. The simulations by Moriya were performed on the NAOJ Center for Computational Astrophysics PC cluster. This research was published in Nature Astronomy on September 3, 2018.