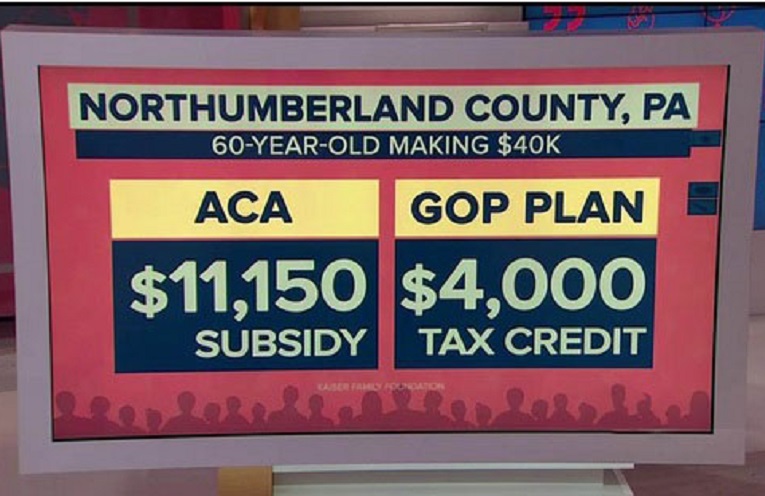 The House plan to repeal and replace the Affordable Care Act would hit one group of voters especially hard: older, rural voters who were crucial to President Donald Trump’s victory in 2016.

The House plan would offer tax credits based on income and age, but the net effect would be a drop in federal subsidies for people who are older, who have a lower income and who live in high-premium areas, according to an analysis from the Kaiser Family Foundation. When you put those elements together, Trump’s voters appear to take the biggest hits.

Older voters were a big part of Trump’s winning 2016 coalition. He won 52 percent of the vote among all voters 45 or older.

A county-level analysis from KFF looked at how the tax credits for various age and income groups in the House plan compared to the subsidies offered by the Affordable Care Act. When you compare those numbers to the 2016 election results, a pattern emerges. Counties that voted for Trump would see a bigger drop in the tax credits designed to make insurance premiums more affordable. 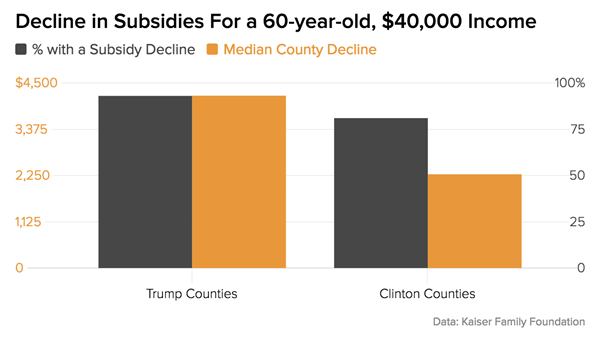 Even among younger individuals, counties that voted for Trump are more likely to see a decrease in aid with the tax credits in the new House healthcare plan. The subsidy would decline among 40-year-olds with incomes of $40,000 a year in 16 percent of Trump counties. They would decline in only 9 percent of Clinton counties.

One big force driving these differences is higher premiums in Trump counties, which tend to be more rural. Rural communities tend to have fewer insurers, less competition and higher rates.

The tax credits proposed in the House bill are flat, meaning that a 60-year-old earning $40,000 would get the same tax credit regardless of where he or she lives — $4,000.

Under the Affordable Care Act, subsidies are determined by a formula that considers income and the local cost of coverage. That can make a real difference, particularly for those living in swing states.

In Las Vegas, that same 60-year-old would qualify for an annual federal subsidy of $4,380, according to the KFF report. But in rural Northumberland County, Pennsylvania, the available federal subsidy is $11,150. 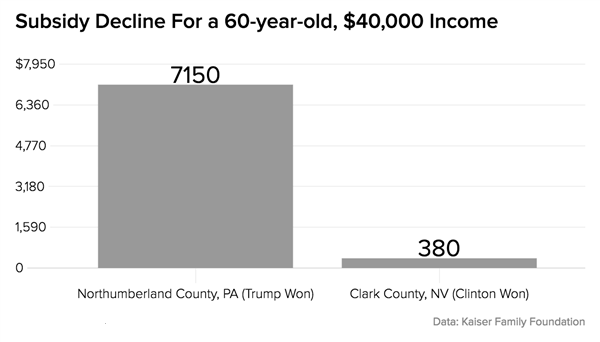 The numbers hold a special significance because many of Trump’s voters pointedly opposed the ACA and pushed for its repeal. Throughout the campaign and after his win, Trump promised that the Republican replacement for President Obama’s signature legislation would be better, less expensive, and provide “insurance for everybody.”

The numbers in the KFF analysis show the political promise and peril in the House plan for the places that were most strongly behind Trump. Under the House plan, many of those voters may get the repeal they sought, but higher costs would come as part of the deal.