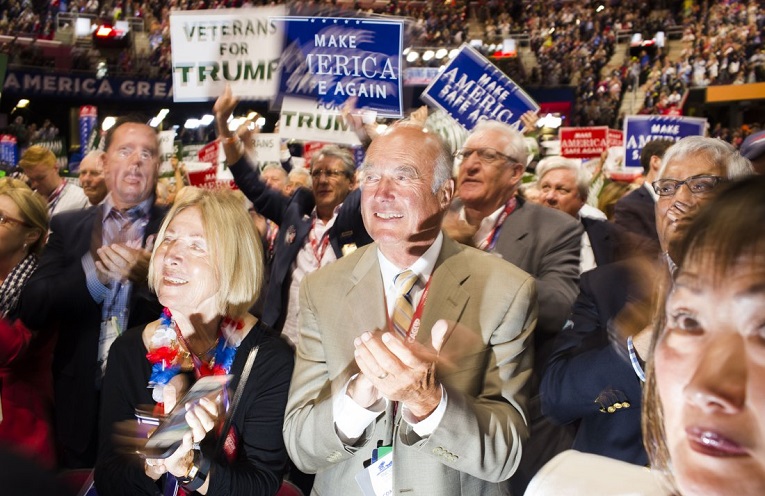 “Donald Trump is the most pro-LGBT Republican president in history,” Gregory T. Angelo, president of the Log Cabin Republicans, the gay GOP group, recently told me in an interview at the annual Conservative Political Action Conference (CPAC) in National Harbor, Maryland. He’d said that about GOP presidential candidate Trump, too, during the election campaign. But in the end his group decided not to endorse Trump. That was bizarre since they did endorse Mitt Romney in 2012 and John McCain in 2008 ― and yet here the group thought Trump was the “most pro-LGBT” GOP presidential candidate ever.

Responding to that oddity, Angelo called me out for “wrongly predicting” that the group would endorse Trump, and said they didn’t endorse Trump because “we were not looking at Trump for any singular issue,” and the “greatest hesitation” in endorsing him was that “this man never held elected office” and “there were no guideposts.”

“Yes, I don’t think that this one decision on transgender guidance changes that,” he explained. “We have never had a Republican president who so candidly and openly discussed not only gay, not only lesbian, not only bisexual but transgender Americans as well.”

Let’s put aside for a moment that Trump is opposed to marriage equality, promised to appoint judges to overturn it, and nominated Neil Gorsuch, a self-described originalist in the mold of the late Antonin Scalia, to the Supreme Court. If Trump is talking about transgender Americans in a positive way one day — saying Caitlyn Jenner could use the women’s room at Trump Tower — only to take away their rights another day, isn’t that untrustworthy and hypocritical?

The transgender conservatives I interviewed at CPAC were certainly angry with Trump, not viewing him as “pro-LGBT.” Jennifer Williams, a trans Republican from New Jersey, criticized Trump for backtracking on North Carolina’s HB2 during the campaign, first saying he opposed it, then saying days later it should be left to the states. (She voted for John Kasich in the primary and wrote him in for the general election as well because of that.)

“I don’t see that as hypocrisy,” Angelo said. “What I see time and again with Trump is someone who is trying to strike a balance. Trying to strike a balance between LGBT equality, LGBT advocacy organizations and people who prioritize so-called religious freedom and evangelical Christians. And I don’t think that any one decision changes that as his rightful place as the most pro-LGBT Republican president.”

Angelo points to Trump not rescinding President Obama’s executive order banning anti-LGBT discrimination among federal contractors as evidence of his being so “pro-LGBT.” And yet, George W. Bush, when he came into office in 2001, didn’t rescind Bill Clinton’s order banning discrimination against gay people in the federal workforce. That didn’t stop Bush, however, from later promoting a federal marriage amendment, part of a strategy to bring religious conservatives out to vote for his re-election. (Trump has said he would sign the First Amendment Defense Act, which would allow for anti-LGBT religious exemptions, and a Trump transition team official told me at CPAC that a “religious freedom” executive order that would do the same is still on the way.)

To that, Angelo responded that because Trump supposedly made a point of stating he wasn’t rescinding the federal contractor order it made him stand out from Bush or anyone else.

“He proudly proclaimed it,” Angelo claimed, presumably referring to the statement that was released about the status of the order by the White House, which came with no actual quote from the president. “We never had a sitting Republican president who declared his support for the LGBT community so emphatically.”

But then why did he pull the transgender student protections?

Because, Angelo said, what’s been “missing” on transgender rights as opposed to gay, lesbian and bisexual rights, is the “educational component.” In other words, Trump can’t support trans rights because the public isn’t up to speed on it yet.

But isn’t that a contradiction of Trump’s image as a supposed great disruptor, supposedly not behaving like a normal Washington politician who is always worrying about polls or public outrage? Why isn’t he disrupting Jeff Sessions and his homophobic agenda? Why is he pandering to religious conservatives?

“I don’t agree with your characterization of Jeff Sessions,” Angelo shot back. “In his confirmation hearing he referenced the fight for justice, discussing ― his words ― ‘our LGBT people.’”

I had to stop right there for a moment. This would be laughable if it weren’t such a serious matter.

Sessions has a long, well-documented, grotesque anti-LGBT record. As a U.S senator for nearly 20 years, he has scored a big fat zero from the Human Rights Campaign, voting for every anti-LGBT bill and against every pro-LGBT bill, including the long-blocked hate crimes bill President Obama pushed and signed in 2009 and which Sessions is expected to enforce as attorney general.

He called the Supreme Court’s landmark Obergefell ruling on marriage equality in 2015 an “effort to secularize, by force and intimidation.” And he backed the now-suspended Alabama state supreme court chief justice, Roy Moore (now being considered by the Alabama governor among those who might replace Sessions in the Senate), who defied the Supreme Court on the ruling. Over the years, Sessions actively tried to block effective methods of preventing HIV, putting lives at risk over morality, and tried to pull National Endowment for the Arts funding for a lesbian filmmaker.

In 1996, as Alabama attorney general, Sessions tried to stop the Southeastern Lesbian, Gay, Bisexual College Conference from meeting at the University of Alabama, arguing that public universities were banned by the state from promoting “actions prohibited by the sodomy and sexual misconduct laws.” A federal judge struck down the state ban after the group took the issue to court, but Sessions was undaunted: “I intend to do everything I can to stop that conference,” he told the Huntsville Times. But the federal judge weighed in again and halted him.

“I think we need to be careful about using words like homophobic,” Angelo continued, in discussing Sessions. “In many ways, that word has been brandished so much. You can call people wrong, and disagree with them and fight them, without branding them as homophobes.”

So, does he believe that people who are opposed to civil rights for LGBT people are not anti-gay? I didn’t even think this was up for a debate.

“There are definite homophobes who are out there,” Angelo responded. “But those are people who don’t want anything to do with gay people, can’t stand gay people, don’t want to be around gay people. I don’t think Jeff Sessions fits that definition.”

He then went on to explain how someone who is an evangelical Christian and has done everything in his power to stop LGBT rights is not “anti-gay” or “homophobic.”

“Here’s the reason why individuals who do not support what I would call pro-LGBT legislation aren’t automatically anti-gay as a result,” he said. “It’s, what is the role of government in our lives? This is time and again what conservatives and Republicans I meet with on Capitol Hill and elsewhere reference in terms of the reason why.”

I explained that that argument isn’t accepted regarding any other minorities when it comes to civil rights ― that the government is intruding on us by protecting them from discrimination ― and that a majority of Americans now support LGBT equality. And I asked why we would bow to a small minority of religious zealots, no matter how firm their grip is on the party. “You want to compromise,” I said.

“Initially, yeah,” he answered. “You’re going to have to meet Republicans where they are, and understand the political reality of today.”

Angelo then described what he saw as the merits of the so-called “Utah Compromise,” a terrible bill passed in Utah in 2015 to protect LGBT people against discrimination but which allowed for broad religious exemptions and didn’t include protections in public accommodations. Some mainstream LGBT rights groups actually supported it, saying Utah was the one exception — because it is a virtual anti-LGBT theocracy, run by the Mormon Church — and that they wouldn’t support it anywhere else. But critics, including me, lambasted them, rightly pointing out that there can be no exceptions nor compromises on civil rights.

“I go back time and again to the Utah Compromise,” Angelo said, “even though it didn’t cover everyone, even thought it wasn’t thoroughly comprehensive, because what it did, in addition to providing literal protections to Utahans, it then creates a climate where people in the deep red conservative state of Utah can see that it did not have a negative impact on them or their lives and can lead to passing more legislation down the line.”

But in fact, it actually works the opposite way, in which no further legislation comes “down the line.” Women weren’t included in protections against discrimination in public accommodations in the 1964 Civil Rights Act, for example ― and they’re still not today. Transgender people weren’t included in New York’s statewide protections for gay, lesbian and bisexual people which became law in 2003 ― and they’re still not today.

When you compromise on civil rights it creates a new normal. And just as we can’t let Donald Trump become the new normal, we can’t allow him or our opponents to make compromising on our rights, and allowing religious exemptions, the new normal.