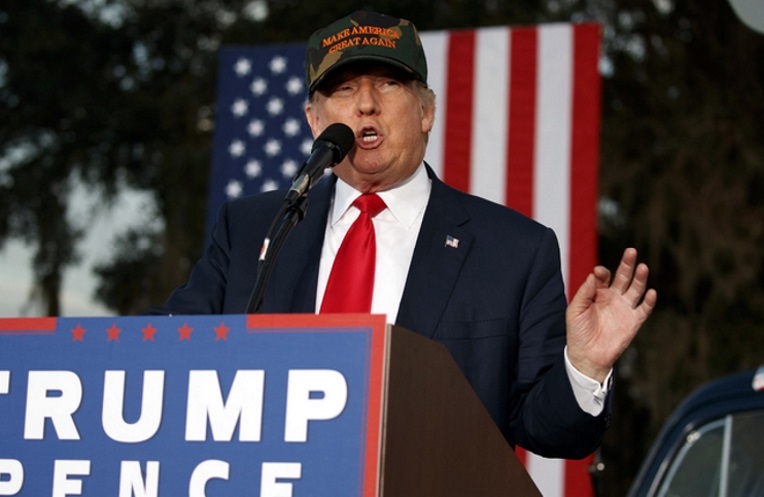 ASHLAND, Ohio — Donald Trump is taking a break from campaigning Wednesday to formally open his new hotel in Washington, while dispatching his running mate to play political defense in Utah — which hasn’t backed a Democrat for president in 52 years.

The odd travel schedule a dozen days before the Nov. 8 election illustrates a Republican ticket pulled in two directions while Democrat Hillary Clinton surges. Trump’s priority Wednesday is clear: His personal brand and business, while Indiana Gov. Mike Pence tries to boost the ticket where no Republican should have to.

“I don’t really believe the polls, but this looks like a tight race,” said Trump supporter Susan Donaldson, 55, who worried at a Tuesday afternoon rally in Sanford, Florida, that the GOP nominee may be spreading himself too thin. “Can he be taking time out like that?”

Trump will visit North Carolina for two campaign rallies on Wednesday afternoon, after spending the morning attending a ribbon cutting at the new $212 million hotel that bears his name at Washington’s Old Post Office Pavilion, not far from the White House.

Not all of the New Yorker’s backers shared Donaldson’s concerns about Trump.

“He’s not distracted. He’s a smart man who can do it all,” said Kathy Haight, a 69-year-old grandmother from Geneva, Florida, who attended a Trump rally on Tuesday. “And he’s going to win. He can afford to take the little break if he wants.”

Pence also is stopping in swing states of Nevada and Colorado before he heads on Thursday to solidly Republican Nebraska, a state that awards some of its electoral votes by congressional district. His rally in Omaha may be aimed at shoring up support in the one district that Clinton could potentially win.

Spokesman Marc Lotter said Pence’s Utah visit is more about favorable logistics than fears the deep red state could be slipping away. Pence had already planned a Western swing that included a fundraiser in Utah, he said, adding that a rally was easy.

But Trump undoubtedly can’t count on heavily Mormon Utah, last won by a Democrat when President Lyndon B. Johnson carried the state in 1964. Many of the state’s top Republicans urged Trump to abandon the race following the release of a 2005 recording on which the billionaire bragged about sexually accosting women.

That’s been a boon to independent presidential candidate Evan McMullin, a former CIA agent and graduate of Brigham Young University.

Democrat Hillary Clinton, meanwhile, holds two events in Florida on Wednesday, both aimed at encouraging voters in the state to cast an early ballot. It’s her 69th birthday, a milestone she celebrated a day early on Univision’s entertainment news show “El Gordo y La Flaca,” where she was feted with a bottle of tequila and a large cake featuring her face and the White House.

There was no mention on Tuesday from Clinton about the news from the Department of Health and Human Services that premiums for insurance under President Barack Obama’s signature health care law would rise sharply next year.

Before federal subsidies, premiums for a midlevel benchmark plan will increase an average of 25 percent across the 39 states served by the federally run online market. Some states will see much bigger jumps, others less. Clinton has vowed to preserve insurance for the millions of Americans covered under the law, and spokeswoman Jennifer Palmieri conceded that “cost controls are a big concern for Hillary Clinton.”

She said the Democratic presidential nominee has a plan to lower insurance costs, “both through the public option and a Medicare buy-in.” She warned that Trump’s plan would strip insurance from roughly 20 million Americans who now benefit.

Trump didn’t miss the opportunity to capitalize on the fresh political ammunition, insisting “Obamacare is just blowing up” during a series of campaign events on the final day of an extensive three-day swing through must-win Florida.

While the health care law has provided coverage to millions previously uninsured, it has also increased costs and regulatory burdens for businesses, particularly medium-sized to large companies. But small businesses are exempt from its requirement to cover full-time employees or face fines.

But while blessed with the unexpected political gift, it’s not clear if Trump will be able to capitalize on it. He spent Tuesday morning visiting another of his properties, the Doral golf course outside Miami. There, employees, many of them Hispanic women, offered testimonials about how happy they are working for him — touting Trump’s job-creating prowess.

Trump also promoted the workers as examples of people affected by rising “Obamacare” premiums, though the golf course’s general manager later clarified that most workers receive their insurance through Trump as their employer.

“He could make this race for the last two weeks a referendum on Obamacare. But of course he won’t do that,” said former Ted Cruz strategist Chris Wilson. “It’s just a matter of him swatting at flies instead of having a coherent and consistent message.”

While Trump’s diversions from the trail baffled political pros like Wilson, Alfred Davis, a 56-year-old Baptist pastor from Richfield, Ohio, who attended a Pence rally in nearby Ashland on Tuesday, said Trump’s moonlighting doesn’t bother him.

“He is a businessman after all,” Davis said. “I have a feeling he’ll find a way to turn these things into campaign events, anyway. He’s not going to miss any chance he has.”