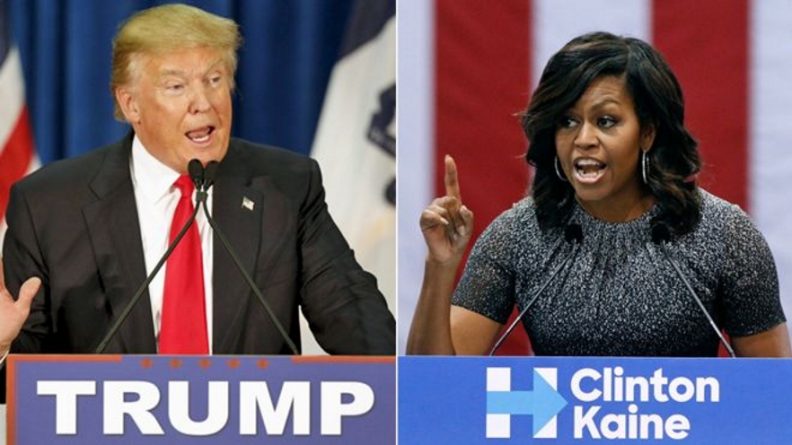 Republican presidential candidate Donald Trump has launched a rare attack on Michelle Obama, saying “all she wants to do is campaign” for his rival.

He also accused the first lady of attacking Hillary Clinton in 2007 by invoking a line she said about being fit to run the White House.

The Obama campaign had denied the line referred to Mrs Clinton.

“And I see how much [Michelle Obama] likes Hillary,” Mr Trump told a rally in North Carolina.

The New York businessman was referring to a remark Mrs Obama made in 2007 while campaigning for her husband, who was running against Mrs Clinton.

The first lady said: “If you can’t run your own house, you certainly can’t run the White House”.

Some critics questioned whether the comment was an undercut aimed at Mrs Clinton’s relationship with her husband, former President Bill Clinton.

But the Obama campaign maintained the line was not directed at the Clintons and instead referred to their own struggle with parenting during a campaign.

“So, we’ve adjusted our schedules to make sure that our girls are first, so while he’s traveling around, I do day trips. That means I get up in the morning, I get the girls ready, I get them off, I go and do trips, I’m home before bedtime,” Mrs Obama continued in her 2007 speech.

Mr Trump was back on the campaign trail a day after he and Mrs Clinton appeared together at the Alfred E Smith Memorial Foundation charity dinner in New York City.

The annual event, which takes place during election years, offers presidential candidates a chance to crack jokes about one another.

But Aflred E Smith V told CNN on Friday Mr Trump “crossed the line and took it a little too far”.

“The room did get a little uncomfortable,” he added.