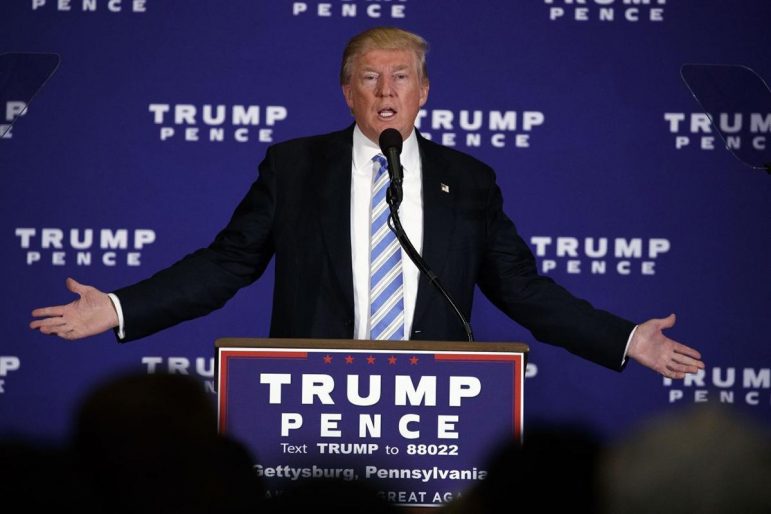 The Republican has pledged a raft of proposals for his potential first 100 days in the White House – the main focus was on illegal immigration, refugees and lifting restrictions on the energy industry

It was “four score and seven years ago” that Donald Trump was really beginning to make his mark in New York: a long career of real estate and celebrity.

Few would have predicted that the mogul would be giving hi stake on the iconic Gettysburg address – a powerful Civil War-era speech from Abraham Lincoln – in 2016, listing off what he would do within the first 100 days as president.

His proposals include scrapping funding to UN climate change programmes, stopping immigration from war-torn countries and “extreme vetting” of everyone else, slashing corporation tax by more than half to 15 per cent and building controversial projects such as the oil and gas Keystone Pipeline. 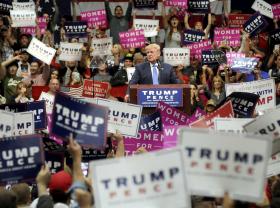 “We’re paying billions of dollars [to the UN],” he said. “We’re going to fix our own environment.”

The speech on Saturday came just days after Mr Trump said he would only accept the results of the 2016 election “if he wins”.

“The system is totally rigged and broken,” he declared, insisting that there was “widespread voter fraud”.

“1.8 million dead people are registered to vote, and some of them are voting. I wonder how that is happening,” he said.

“We will drain the swamp in Washington DC and replace it with a new government of ‘by and for the people’, believe me,” he added.

He promised that Mexico would pay for the wall along the US border and that there would be a two-year or five-year minimum prison sentence for people re-entering the country after being deported, depending on how many times they had already tried to come back.

Federal funding for sanctuary cities, which shelter illegal immigrants, would no longer exist, a promise that prompted loud cheers from the crowd in Pennsylvania.

“We want people who love us and love our values. And there are ways, through talent, to determine that,” he said.

In Mr Trump’s world, there would be a five-year ban for departing politicians to become lobbyists, no foreign donors would be able to raise money for American elections, and there would be a constitutional term limit on members of congress.

Regulations and the government workforce would also be reduced. For every new federal regulation, two laws would be scrapped, he said.

“Regulation is killing our economy,” he told the crowd.

Parents could send their children to any school they wish, and veterans could pick up their prescriptions from a local doctor. Currently they have to go through the Department of Veterans Affairs

Within the first 100 days of his administration, Mr Trump said he is also “looking forward” to suing all the women who accused him of sexual assault after the election, as well as filing litigation against the “violent protesters” at his rallies who were “paid” by the Hillary Clinton campaign.

Some of his proposed policies had a more socialist, Bernie Sanders-flavour, such as stopping big company mergers which would “put too much power in the hands of too few”, and no longer allowing companies such as Amazon to avoid paying tax in the US.

He pointed to Comcast purchasing NBC in 2013 and said: “We will look at breaking that deal up and other deals like that. It should never, ever have been approved in the first place.”

The nominee also reiterated his pledge to provide paid maternity leave and savings accounts for carers – which got quiet applause from the crowd.

In a pledge that might be seen as very ambitious, he said that the US economy would grow by 4 per cent each year [it grew an annualised rate of 1.1 per cent for the first quarter of 2016].

“I am asking the American people to dream big once again.”

Mr Trump added that he would create thousands of jobs and tear up the North American Free Trade Agreement – “we will unwind trade deals so fast” – withdraw from the Trans Pacific Partnership – “a potential disaster” – and lift all restrictions on the energy industry.

“I will lift restrictions on the production of $50 trillion [£40.8tn] worth of job-producing American energy reserves including shale, oil, natural gas and clean coal and we will put our miners back to work,” he vowed.

“It won’t be free trade, but it will be fair trade, and it will be real.”