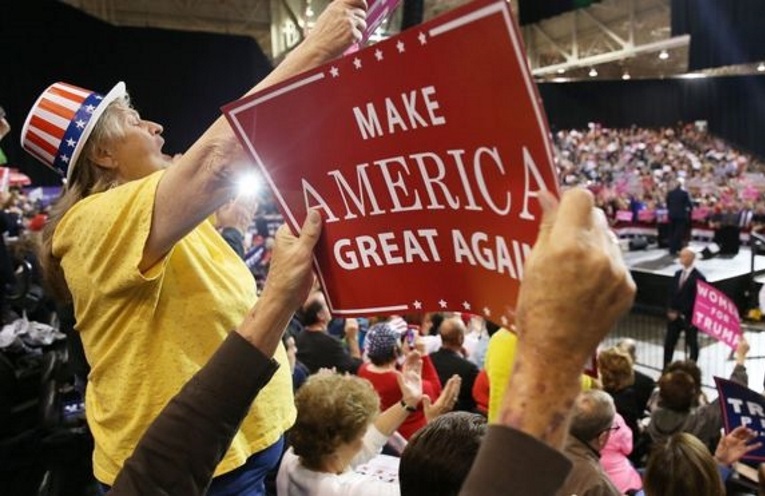 The Donald Trump campaign has admitted the Republican lags behind Hillary Clinton with just over two weeks to go before Americans cast their votes.

“We are behind. She has some advantages,” said his campaign manager Kellyanne Conway, who added: “We’re not giving up. We know we can win this.”

On Friday, Mr Trump made a rare admission that he could lose.

Her campaign has predicted this is going to be “the biggest election in American history”.

Campaign manager Robbie Mook told Fox News Sunday: “More people are going to turn out than ever before.”

Polling in Republican strongholds like Utah and Arizona suggest these states could back a Democrat for the first time in decades.

The polls may be wrong in Arizona but if they are correct, it may be the start of a Democratic trend that doesn’t just put the state in play in a Clinton 2016 rout scenario, it makes Arizona a legitimate swing state in coming elections.

“The demographics in the state are continuing to change,” says Arizona State University political science professor Richard Herrera. “If there is another increase in Latino voters, which there almost certainly will be, followed with an increase in party registrants, this could become a real battleground in future elections.”

For Democrats, that’s a dream scenario, giving them new and plentiful paths to electoral success.

For Republicans, it could mean the start of a long-term political nightmare.

That apparent change to the electoral map has prompted a shift in strategy for the Clinton camp, which is spending money on helping Democrats running in close House or Senate races.

Mrs Clinton said she didn’t even bother responding to Trump anymore and would instead spend time “emphasising the importance of electing Democrats down the ballot”.

Mr Trump’s campaign manager said the Clinton team had a huge financial advantage in how much they could spend on negative ads against Mr Trump, and high-profile campaigners.

“She has a former president, who happens to be her husband, campaigning for her. The current president and first lady, vice president, all much more popular than she can hope to be,” said Kellyanne Conway.

But this election does not feel over when you realise the depth of support Mr Trump has on the campaign trail, she said.

However, Mr Trump reflected on defeat for the first time on Friday when he said that – win, lose or draw – he would be happy with himself.

A day later, he announced a raft of measures for his first 100 days in office, that include used curbs on lobbying and new trade and climate change negotiations.

With just 16 days until the election, much of the recent focus has been on controversies linked to his campaign.

On Saturday, he promised to sue every woman who had accused him of sexual misconduct.

He also repeated his claims that the election is rigged, because of voter fraud at polling booths and media bias.

On Sunday, Eric Trump, Mr Trump’s son, said his father would accept the outcome but only if it was a “fair” election.