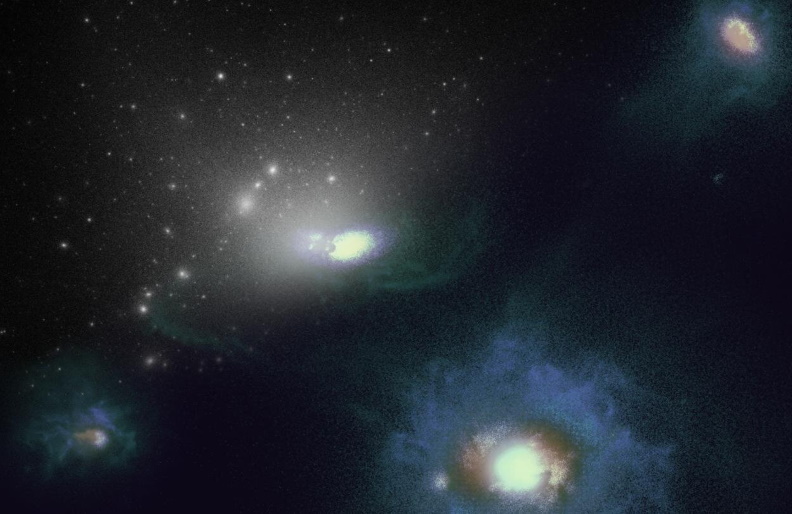 Just like the moon orbits the Earth, and the Earth orbits the sun, galaxies orbit each other according to the predictions of cosmology.

For example, more than 50 discovered satellite galaxies orbit our own galaxy, the Milky Way. The largest of these is the Large Magellanic Cloud, or LMC, a large dwarf galaxy that resembles a faint cloud in the Southern Hemisphere night sky.

A team of astronomers led by scientists at the University of California, Riverside, has discovered that several of the small—or “dwarf”—galaxies orbiting the Milky Way were likely stolen from the LMC, including several ultrafaint dwarfs, but also relatively bright and well-known satellite galaxies, such as Carina and Fornax.

The researchers made the discovery by using new data gathered by the Gaia space telescope on the motions of several nearby galaxies and contrasting this with state-of-the-art cosmological hydrodynamical simulations. The UC Riverside team used the positions in the sky and the predicted velocities of material, such as dark matter, accompanying the LMC, finding that at least four ultrafaint dwarfs and two classical dwarfs, Carina and Fornax, used to be satellites of the LMC. Through the ongoing merger process, however, the more massive Milky Way used its powerful gravitational field to tear apart the LMC and steal these satellites, the researchers report.

“These results are an important confirmation of our cosmological models, which predict that small dwarf galaxies in the universe should also be surrounded by a population of smaller fainter galaxy companions,” said Laura Sales, an assistant professor of physics and astronomy, who led the research team. “This is the first time that we are able to map the hierarchy of structure formation to such faint and ultrafaint dwarfs.”

The findings have important implications for the total mass of the LMC and also on the formation of the Milky Way.

“If so many dwarfs came along with the LMC only recently, that means the properties of the Milky Way satellite population just 1 billion years ago were radically different, impacting our understanding of how the faintest galaxies form and evolve,” Sales said.

Study results appear in the November 2019 issue of the Monthly Notices of the Royal Astronomical Society.

Dwarf galaxies are small galaxies that contain anywhere from a few thousand to a few billion stars. The researchers used computer simulations from the Feedback In Realistic Environments project to show the LMC and galaxies similar to it host numerous tiny dwarf galaxies, many of which contain no stars at all—only dark matter, a type of matter scientists think constitutes the bulk of the universe’s mass.

“The high number of tiny dwarf galaxies seems to suggest the dark matter content of the LMC is quite large, meaning the Milky Way is undergoing the most massive merger in its history, with the LMC, its partner, bringing in as much as one third of the mass in the Milky Way’s dark matter halo—the halo of invisible material that surrounds our galaxy,” said Ethan Jahn, the first author of the paper and a graduate student in Sales’ research group.

Jahn explained that the number of tiny dwarf galaxies the LMC hosts may be higher than astronomers previously estimated, and that many of these tiny satellites have no stars.

Dwarf galaxies can either be satellites of larger galaxies, or they can be “isolated,” existing on their own and independent of any larger object. The LMC used to be isolated, Jahn explained, but it was captured by the gravity of the Milky Way and is now its satellite.

“The LMC hosted at least seven satellite galaxies of its own, including the Small Magellanic Cloud in the Southern Sky, prior to them being captured by the Milky Way,” he said.

Next, the team will study how the satellites of LMC-sized galaxies form their stars and how that relates to how much dark matter mass they have.

“It will be interesting to see if they form differently than satellites of Milky Way-like galaxies,” Jahn said.