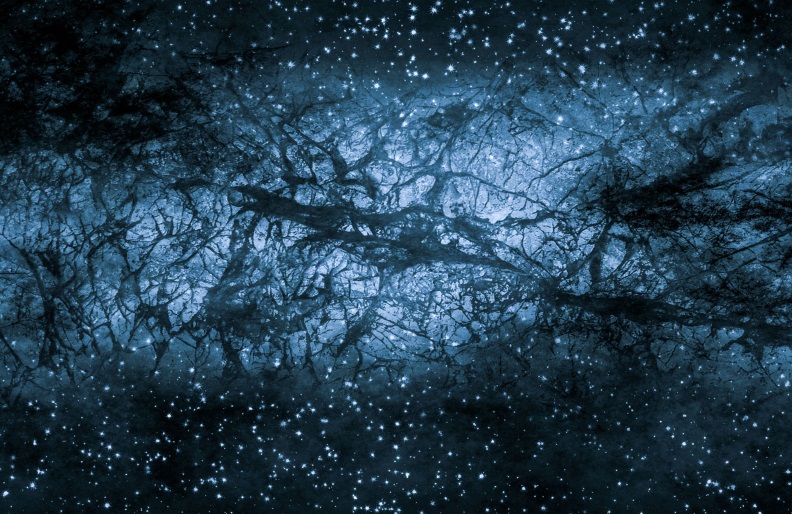 Dark matter, it seems, has been clinging to galaxies for a very long time. Most galaxies that existed 10 billion years ago had about as much dark matter as galaxies do today, contradicting earlier studies that suggested less dark matter lurked around galaxies in the early universe.

“Dark matter was similarly abundant in star-forming galaxies in the distant past as it is in the present day,” said Alfred Tiley, an astronomer at Durham University in England and lead author on the new study. The research was recently submitted to the journal Monthly Notices of the Royal Astronomical Society and published Nov. 16 in the preprint journal arXiv. “It wasn’t a complete surprise, but in reality, we didn’t know whether the observational reality would align with expectations from theory.”

Dark matter makes up approximately 85 percent of the total mass in our known universe, but the mysterious substance does not interact with light, leaving scientists in the dark about the its precise nature. So, instead of viewing it, astronomers must rely on dark matter’s gravitational pull on the normal matter, called baryonic matter, that makes up the stars, nebulas and planets we see in the night sky, as well as all the trees, rocks and people on Earth.

Dark matter tends to clump into halos around galaxies; astronomers discovered this by measuring how fast galaxies rotate. According to Newton’s law of gravity, stars on the outskirts of a galaxy should rotate much more slowly than those at the center. But in the 1960s, astronomers found speedy suburban stars on the fringe of the Milky Way that hinted at extra matter hiding out beyond those stars’ galactic orbits.

Studies have since measured thousands of rotation rates across the universe, confirming the presence of these dark matter halos.

In the new study, researchers used data from two surveys of 1,500 star-forming galaxies to calculate rotation rates for galaxies going back 10 billion years. Precisely measuring galactic rotation far in the cosmic past is difficult, because these ancient galaxies are incredibly distant and faint. So, the scientists estimated an average by clumping the galaxies by distance and then combining their light.

Accounting for galaxy mass and density, the researchers found nearly equivalent amounts of dark matter for galaxies that existed long ago in our cosmic past as for galaxies in our local universe.

But not everyone is entirely convinced. The findings contradict previous studies that found that galaxies in the early universe had less dark matter than younger galaxies do. Those studies looked at much more massive individual galaxies and used a different model to infer the amount of dark matter.

“[The new research] uses only one of the four independent approaches we had used to come to our conclusion,” Reinhard Genzel, lead author of one of the previous studies and an astronomer at the Max Planck Institute for Extraterrestrial Physics in Garching, Germany, told Live Science.

Tiley found that his team’s results were highly dependant on the model they used. Ultimately, he chose to use a model that he and his colleagues found to be more representative of the low-mass galaxies scientists believe predominated at the early epoch.

Computer simulations suggest that very high-mass galaxies, like those studied by Genzel, are rare in the distant universe. “It appears [their] results apply to very massive galaxies at this distant epoch but may not be representative of galaxies with comparatively lower stellar masses, like those that we studied in our work,” Tiley told Live Science.

The new results match what would be expected from the prevailing “lambda cold dark” matter model describing our universe. This model explains how the universe is structured and why it is expanding at an ever faster rate.