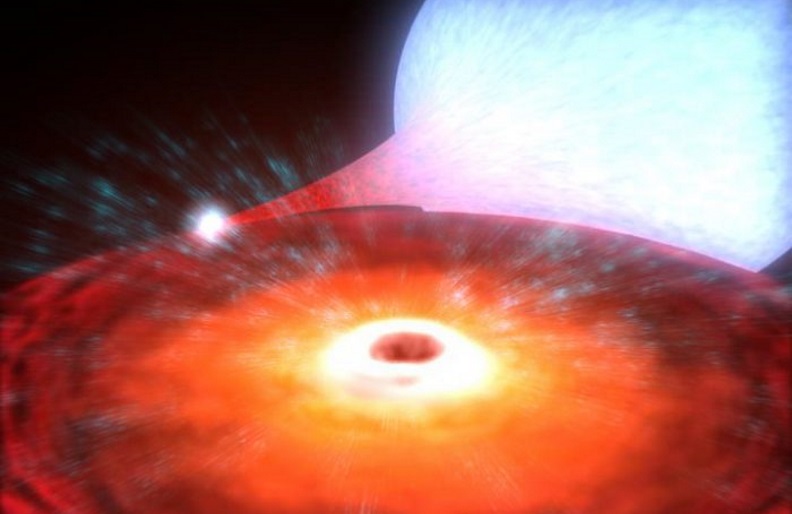 Black holes are elusive cosmic creatures. Einstein himself doubted they existed even though they were a prediction of his most successful theory General Relativity. As the name would imply, black holes are entirely black; they absorb all light and so cannot be observed with traditional techniques. Instead, scientists look for the effects of a black hole’s massive gravitational field on nearby celestial bodies. The past 30 years have seen an explosion of research on black holes, with numerous potential black holes being identified.

Now, an international team of scientists has recorded the most precise images of Sagittarius A*—the supermassive black hole that occupies the center of our Milky Way galaxy. To be more precise, they captured images of large globules of superheated gas teetering on what seems to be the precipice of the last region of stable orbit before falling into the ineffable center of the black hole.

To detect the regions of activity around the black hole, the researchers used an instrument called GRAVITY which compiled observational data from 4 separate 8-meter telescopes located at the European Southern Observatory’s Very Large Telescope in Chile. The researchers found several “hotspots” or magnetic activity rotating at a speed of about 30% the speed of light around a large central object about the mass of 4 million suns. The observations also revealed some previously unknown properties about the orientation of the Milky Ways central black hole, information that will help future observational endeavors. The team’s findings were published October 31st in the journal Astronomy & Astrophysics,

Black holes form when a large enough dying star collapses in on itself, creating an incomprehensibly dense singularity that exudes an extremely powerful gravitational field. The spacetime region surrounding a black hole is so twisted and distorted by the extremely dense singularity that not even light itself can escape its pull. Because their gravitational pull is so strong that even light gets trapped, you cannot observe a black hole by just directly looking at it as you would for a star, planet, or asteroid. Instead, scientists detect and measure black holes by observing their gravitational effects on nearby objects. By measuring the motion of an object around a black hole, scientists can extrapolate that information to several properties of the black hole, such as its size, gravitational field strength, spin, etc. For example, strange orbital motion of stars, clusters moving very quickly, or variations in the intensity of light emitting from a star could all be signs of activity of a nearby black hole. Black holes themselves also leak high quantities of electromagnetic energy and can appear as giant pulses of energy in the night sky.

It is by now commonly accepted by astronomers that at the center of most large galaxies lies a supermassive black hole that serves as the galactic core. Observations indicate that the distribution and motion of stars in most galaxies is likely the result of a supermassive black hole in the center exerting its gravitational pull on the stars. The black hole is to our galaxy what the sun is to our solar system, a central point whose gravity holds things together.

Black holes are extremely high-energy regions of space and so emit large amounts of energy and magnetism. Intense magnetic fields will swirl and mix gases hanging around in the black holes accretion disc, which will cause them to snap back and forth extremely quickly and become superheated. These “flares” manifest as extremely bright “hotspots” of thermal and electromagnetic activity in the accretion disc. t. These flare activities can be thought of as analogous to a solar flare from our own sun. Even though these flares are extremely bright by conventional standards, they are very dim compared to the other activities of the black hole and they have a tendency to be masked by the extreme relativistic distortion of local spacetime They are also relatively short-lived; after about an hour magnetic activity will tear the particles away and annihilate the cloud.

The team of researchers first noticed the presence of these flares in Sagittarius A* back in May, while observing the black hole’s relativistic distortion of incoming light from a nearby star S2. The GRAVITY instrument used by the team compiles data from 4 other 8 meter telescopes in South America to capture the extremely faint profile of the flares against the other relativistic effects of the black hole. GRAVITY chains the observational capacities of the 4 telescopes together, essentially creating one big telescope with an effective diameter of 130m. The increased resolution of the GRAVITY device is able to take interferometric images about a thousand times fainter than before. The compiled data showed a continuous stream of flares bubbling up from the accretion disc. These kinds of outbursts have been measured before, but never with enough precision to accurately measure the flares orientation and polarization. The data showed that each of the flares was moving at approximately 30% the speed of light in a 45-minute arc around a mass the size of 4 million suns.

In a stroke of luck, the particular flares recorded by the GRAVITY instrument also gave important information regarding the geometric orientation of the black holes accretion disk with respect to Earth. The position and movement of the flares seem to indicate that Sagittarius A*’s accretion disk is orientated almost face-on to Earth rather than edge-on. In other words, if one drew a straight line from the Earth to Sagitarrius A*, the path would take them right into the center of the accretion disk. The path of the flares could be represented almost as a circular orbit overhead. Just the observation of the flares was unlikely enough; that they also revealed the orientation of the accretion disc seems to be an act of cosmic serendipity. “This is like winning the lottery,” said Reinhard Genzel, one of the authors on the publication, “because the a priori probability that you would see something like this face-on is very low. It almost seems that somebody has arranged this for us; I guess the galactic center is a place for lucky people.”

Additionally, the data showed that the flares of activity were situated just below a region thought to be the point of no return—the last region of innermost stable circular orbit (ISCO). Past the point-of-no-return, an object will inevitably succumb to the gravitational pull of the black hole and fall into the center. The location of the ISCO is determined by a black hole’s fundamental properties; mass, spin, and electric charge. So the fact that the point of no return is actually lower than thought signifies a change in our understanding of Sagittarius A*’s fundamental makeup.

Next on the agenda for the team is to continue their observations of Sagittarius A* with the hope of locating more flares. Additionally, the Event Horizon Telescope, which seeks to compile data from radio observatories worldwide, is set to publish early results from its first full run. The Event Horizon Telescope seeks to observe the event horizon of Sagittarius A*—the region where light becomes trapped in a circular band around the black hole. The event horizon is the theoretical limit on black hole observation, as anything that crosses that line passes out of the realm of the observable universe into the mysterious singularity located at the center of each black hole—a region of space where the known laws of physics break down and are no longer applicable. It is likely that high precision measurements of the black hole’s event horizon will reveal more flare activity and confirm the data gathered by the GRAVITY instrument.

The past few months have been exciting for black hole researchers. Just this September, a team of astronomers based in the U.K. reported the observation of an Earth-sized mass falling into a black hole at ~30% the speed of light, and back in July the MeerKAT telescope in South Africa gave us the most distinct images yet of the center of our galaxy The observations by the GRAVITY instrument are another piece of the puzzle that is the center of our galaxy.