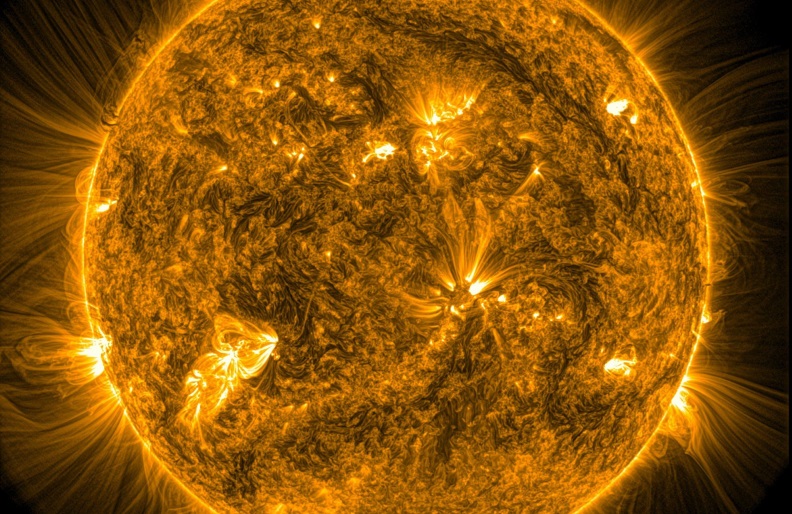 Their findings have been reported in Nature Astronomy.

After examining data gathered over a 10-year period, the team from Northumbria’s Department of Mathematics, Physics and Electrical Engineering found that magnetic waves in the sun’s corona – its outermost layer of atmosphere – react to sound waves escaping from the inside of the sun.

These magnetic waves, known as Alfvénic waves, play a crucial role in transporting energy around the sun and the solar system. The waves were previously thought to originate at the sun’s surface, where boiling hydrogen reaches temperatures of 6,000 degrees and churns the sun’s magnetic field.

However, the researchers have found evidence that the magnetic waves also react – or are excited – higher in the atmosphere by sound waves leaking out from the inside of the sun.

The team discovered that the sound waves leave a distinctive marker on the magnetic waves. The presence of this marker means that the sun’s entire corona is shaking in a collective manner in response to the sound waves. This is causing it to vibrate over a very clear range of frequencies.

The findings could therefore have significant implications for our current ideas about how magnetic energy is transferred and used in stellar atmospheres.

Dr. Richard Morton, the lead author of the report and a senior lecturer at Northumbria University, said: “The discovery of such a distinctive marker – potentially a new constant of the sun – is very exciting. We have previously always thought that the magnetic waves were excited by the hydrogen at the surface, but now we have shown that they are excited by these sound waves. This could lead to a new way to examine and classify the behaviour of all stars under this unique signature. Now we know the signature is there, we can go looking for it on other stars.

“The sun’s corona is over one hundred times hotter than its surface and energy stemming from the Alfvénic waves is believed to be responsible for heating the corona to a temperature of around one million degrees. The Alfvénic waves are also responsible for heating and accelerating powerful solar wind from the sun which travels through the solar system. These winds travel at speeds of around a million miles per hour. They also affect the atmosphere of stars and planets, impacting on their own magnetic fields, and cause phenomena such as aurora.”

Dr. Morton added: “Our evidence shows that the sun’s internal acoustic oscillations play a significant role in exciting the magnetic Alfvénic waves. This can give the waves different properties and suggests that they are more susceptible to an instability, which could lead to hotter and faster solar winds.”

Dr. Morton and Professor McLaughlin are currently working with NASA to analyse images of the sun which were taken by NASA’s High-Resolution Coronal Imager, Hi-C.

Their paper, “A basal contribution from p-modes to the Alfvenic wave flux in the sun’s corona” is published in Nature Astronomy.