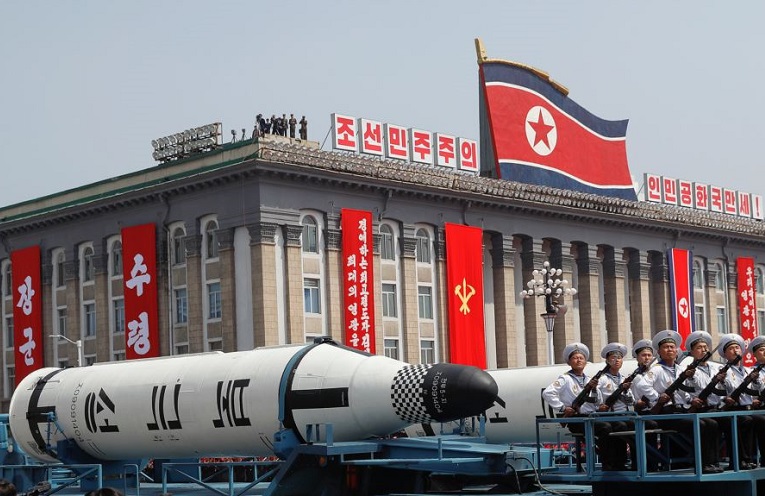 North Korea rolled out intercontinental ballistic missiles and other military hardware at a massive parade on April 15 and vowed that it was “ready to hit back with nuclear attacks” against its enemies.

The parade, celebrating the 105th birthday of Kim Il Sung, the grandfather of current leader Kim Jong Un, took place amid concerns that North Korea is possibly preparing for its sixth nuclear test or a significant rocket launch, such as its first flight test of an ICBM.

State television showed Kim, wearing a black suit and white shirt, clapping in delight along with senior government officials to acknowledge the thousands of soldiers and civilians taking part in the parade at Kim Il Sung Square in the capital, Pyongyang.

State television showed what appeared to be several KN-08 intercontinental missiles rolled out on trucks at the parade. Experts say the missiles would theoretically be capable in a remote future of hitting targets as far as the continental United States, but the North has yet to flight test them.

But Choe Ryong Hae, reportedly the second-most powerful official in the country, said in a speech that Pyongyang is prepared for any threat posed by the United States.

He criticized U.S. President Donald Trump’s administration for “creating a war situation” on the Korean Peninsula by dispatching strategic military assets to the region.

Kim, who took power after the death of his father, Kim Jong Il, in late 2011, has been aggressively pursuing a goal of putting a nuclear warhead on an ICBM capable of reaching the continental United States.

Amid the elevated tensions, the United States a few days ago dispatched what Trump called an “armada” of ships, including an aircraft carrier, into waters off the Korean Peninsula.

The move, coupled with the U.S. retaliatory strikes last week against Syria over a chemical weapons attack on civilians, and the depoyment of a huge bomb against IS positions in Afghanistan earlier this week, touched off fear in South Korea that the United States was preparing for military action against the North.

However, U.S. officials said on April 14 that the Trump administration intends to step up pressure on Pyongyang with the help of China, North Korea’s only major ally, instead of military options or trying to overthrow Kim’s leadership.

A U.S. military official, who requested anonymity to discuss planning, said Washington has no intention of using military force against Pyongyang in response to either a nuclear test or a missile launch.

With additional reporting by AP, Reuters, dpa, and BBC