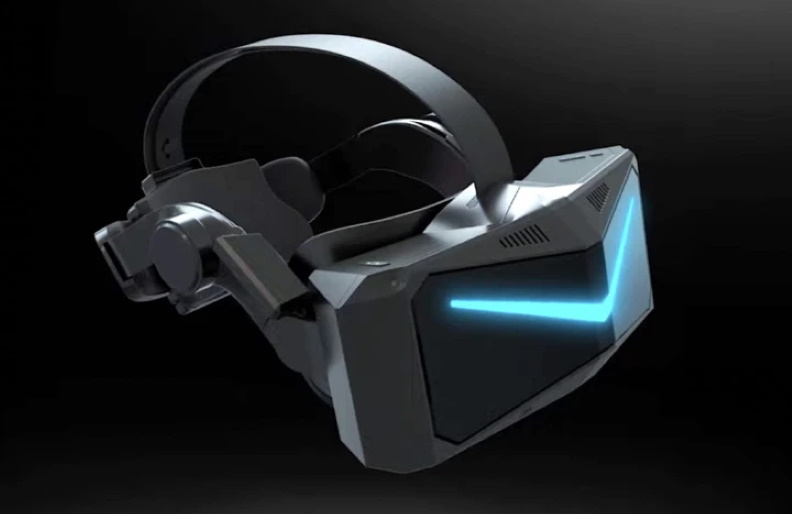 The virtual reality headset wars seem to be heating up with Pimax announcing the Pimax Crystal. This new VR headset marries QLED with mini-LED technology that Pimax says will “take clarity to another level.”

Another reason Pimax has to brag about its visual clarity is the lenses that Crystal uses. Pimax uses glass aspheric lenses instead of the plastic lenses that other headsets use. The company says this allows them to improve clarity by increasing transmittance and reducing stray light and aberration.

Glass lenses allow more light to pass through than plastic lenses and Pimax claims a 99% transmittance rate. Using glass also lowers the amount of stray light coming into the lens and precludes the need for software to adjust for light aberration.

Pimax also says that glass allows them to adopt a new three-layer coating process. The first is a blue light coating that filters 99% of blue light, the second is a dust filter, and the third is an antireflective coating.

In terms of specifications, the Pimax Crystal boasts a resolution of 2880 x 2880 per eye with 42 pixels per degree (PPD). That’s well above the PPD of most headsets. With a speedy 160Hz refresh rate, it should reduce the “screen door” effect.

The combination of the QLED and mini-LED technology also allows for a much wider color gamut for better color reproduction.

Owners will also be able to swap out the lenses to adjust the field of view (FOV). One set has a120 degree FOV while the other has a 140-degree FOV.

The Pimax Crystal ships in the third quarter of 2022 and includes the headset, two controllers, a 6000mAh battery, and 140-degree lenses for a whopping $1,900. That’s a far cry from most consumer VR headsets that are a couple of hundred dollars.

To that point, Pimax Associate Director Joshua Son compares it to a high-end gaming console or gaming PC that allows gamers to get the best graphics on the market. The Pimax Crystal aims to provide the best visual fidelity of any available consumer VR headset.

Speaking of competing VR headsets, San Francisco startup Viture recently unveiled the Viture One, a mixed-reality headset that allows users to play games or consume content anywhere there’s a wireless signal. While it doesn’t have nearly the amount of visual fidelity, it is much cheaper and potentially more useful.

The VR headset wars seem to only be starting and it’ll be interesting to see other competitors take on established brands such as Meta.

This article was originally published on Digital Trends