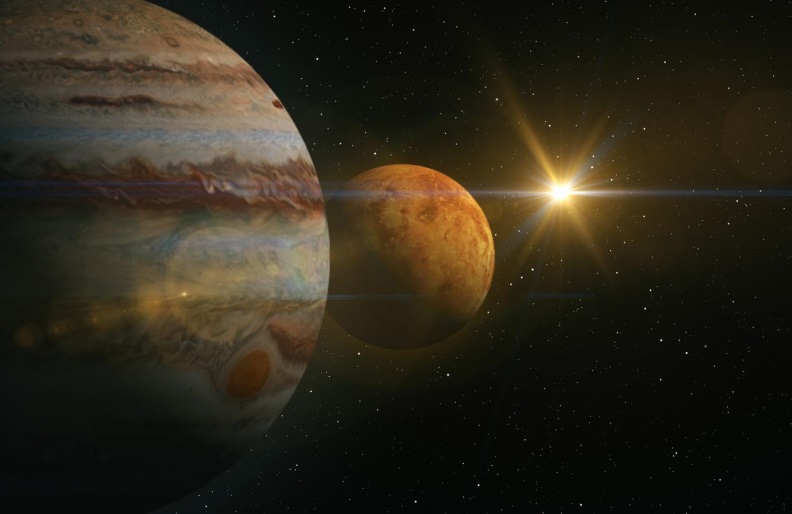 NASA’s New Horizons spacecraft may have spotted a strange and mysterious structure at the boundary of our solar system and the space beyond.

Scientists writing in Geophysical Research Letters think the probe may have caught a glimpse of an enormous wall of hydrogen sitting at the edge of our space neighborhood.

The craft’s “Alice” UV spectrometer has detected an ultraviolet glow, which researchers think may be coming from this glut of hydrogen.

“We’re seeing the threshold between being in the solar neighborhood and being in the galaxy,” research author Leslie Young of the Southwest Research Institute, based in Boulder, Colorado, told Science News.

Our sun churns out a constant barrage of solar wind—charged particles that flood from the powerful burning orb. It’s the interaction of these particles with Earth’s magnetic field that makes auroras dance in our polar skies. But the wind travels far beyond our planet, creating a balloon around our little borough of space.

Interstellar matter—including particles of hydrogen—collect at the edge of this solar system bubble, too small to push through the wind, Live Science explained. The hydrogen builds up into a wall that should produce a distinctive ultraviolet signature, Science News reported.

And the Alice spectrometer, researchers think, might have snapped that particular scattering of light. But they can’t be sure just yet. Although it might be evidence of the hydrogen wall, the ultraviolet light might also be coming from something further out in space.

It’s not the first time scientists have gotten a potential glimpse of the hydrogen wall. NASA’s Voyager probes picked up a similar signal decades ago. This new data serves to bolster those observations. Something—enormous hydrogen wall or not—is sending out the mysterious ultraviolet signal.

As New Horizons travels deeper into space, the light should eventually start to fade as the probe leaves it behind, research author Wayne Pryor of Central Arizona College in Coolidge told Science News. If it stays strong, on the other hand, its source may be even more distant than the wall.

“We assume there’s something extra out there, some extra source of brightness,” research author Randy Gladstone from the Southwest Research Institute told Gizmodo. “If we get a chance with New Horizons we can maybe image it.”

In the meantime, the craft will fly towards a rock floating around the Kuiper Belt, an asteroid belt beyond Neptune’s orbit. It’s set to reach the Ultima Thule object at the start of 2019.

NASA did not immediately respond to a request for comment.