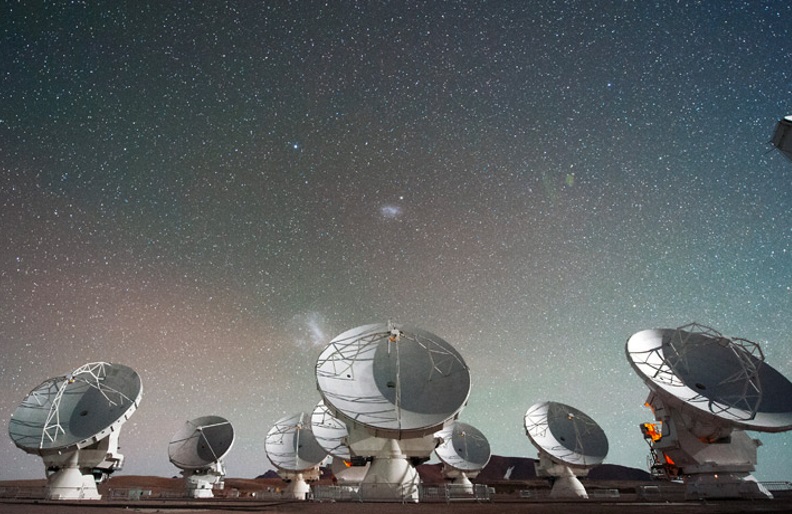 The outermost stars in the Cosmic Seagull, a galaxy 11.3 billion light-years away, race too fast to be propelled by the gravity of the galaxy’s gas and stars alone. Instead, they move as if urged on by an invisible force, indicating the hidden presence of dark matter, astrophysicist Verónica Motta of the University of Valparaíso in Chile and her colleagues report August 8 at arXiv.org.

“In our nearby universe, you see these halos of dark matter around galaxies like ours,” Motta says. “So we should expect that in the past, that halo was there, too.”

Motta and her colleagues used radio telescopes at the Atacama Large Millimeter/submillimeter Array (ALMA) to measure the speed of gas across the Cosmic Seagull’s disk, from the center out to about 9,800 light-years. They found that the galaxy’s stars speed up as they get farther from the galaxy’s center.

That’s a strange setup for most orbiting objects — when planets orbit a star, for instance, the most distant planets move slowest. But it can be explained if the galaxy’s far reaches are dominated by dark matter that speeds things along. Similar measurements of the Milky Way and neighboring galaxies provided one of the first signs that dark matter may exist, although physicists are still trying to detect the proposed particle directly (SN: 2/4/17, p. 15).

Her team’s finding contrasts with a recent claim that such distant galaxies are oddly lacking in dark matter. That idea comes from a 2017 study by astronomer Reinhard Genzel of the Max Planck Institute for Extraterrestrial Physics in Garching, Germany, and his colleagues, who found more than 100 distant galaxies keep their slower stars at the edges and faster stars closer in — little to no dark matter required (SN: 4/15/17, p. 10).

“In the astrophysical community, the [Genzel] result has been viewed with both excitement and skepticism,” says cosmologist Richard Ellis of University College London, who was not involved in either work. “It makes a lot of sense for others to examine galaxies at these [distances] in different ways.”

Motta and her colleagues were able to probe dark matter in the most distant galaxy yet, thanks to a massive galactic train wreck called the Bullet Cluster that acted as a huge cosmic telescope. The Cosmic Seagull lies behind the Bullet Cluster from Earth’s perspective, and the cluster’s mass distorts the Seagull’s light in a phenomenon called gravitational lensing.

That distortion earned the disk-shaped galaxy its name — the first images reminded Motta’s team of the seagull logo of a popular music festival in Viña del Mar, Chile. But it also made the galaxy appear magnified by a factor of 50 — a new record.

“Motta et al have exquisite data,” but their observations are limited, Ellis wrote in an e-mail. The team looked at only one galaxy, and that galaxy is much smaller and less massive than those that seem short on dark matter. Furthermore, the observations don’t cover the entire galactic disk, so the stars may be slower farther out than the team can see.

Motta agrees that a distant slowdown is possible, although her observations cover the same portion of the galaxy’s disk as the study of galaxies that seem light on dark matter.

“We are roughly at the place in which we should see the turning point” from fast to slow stars, if it exists, she says. “But we need to extend the study to get that.” Her team has been granted more time with ALMA next year to keep looking.