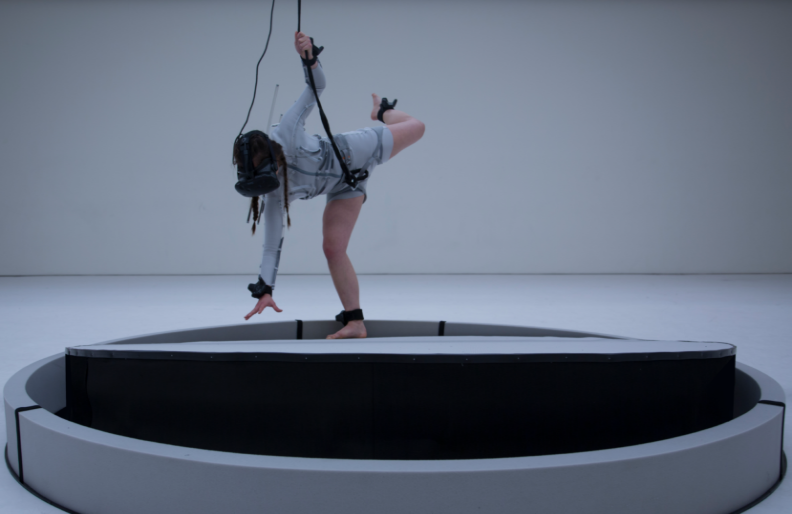 Elyne Legarnisson walks away with the 2020 Lumen XR Award for her work in physical and digital interactions.

Media artist Elyne Legarnisson has created a multi-sensory experience that merges XR technology with the power of physical motion that she calls (un)Balanced. The 10-minute art installation invites you to step into a virtual and physical world where your movements, sound, and touch alter your perception of your body and environment.

For her work, Legarnisson was given the 2020 Lumen XR Award on behalf of Lumen Prize, an organization that recognizes artists working with cutting-edge technology.

Composed of an HTC Vive, a suit designed to shift its weight as you move, and a tilting platform to keep you off balance, Legarnisson’s installation invited users to “play on the edge of stability.” Once attendees put on the harness they wear them told to move or dance. Meanwhile, sensors attached to the full-body capture suit tracked the motion of their bodies and the sounds made from the weights shifting throughout the suit. A computer then translated all of that information, transforming it into a spectacular VR visual art installation that explores movement, sound, and the space around you.

The point of (un)Balance is to propose an alternative reality where you are provoked into breaking habitual movement patterns and rethink immersive interactions. Her work shows you that a simple motion can be beautiful and even provide a deeper non-linear response. VR offers us a powerful new way to re-imagine the role of human-space interactions, and even see how our own movements could be transformed into art.

For Legarnisson, it was about challenging how we see movement. Legarnisson’s approach was inspired by Somaesthetics theory, which is the notion of embodiment broken down into three branches; Analytic, Pragmatic, and Practical. By turning physical motion into visualized data, you are able to analyze your own notion of embodiment.

As a spatial and interaction designer, Legarnisson is an explorer of creative experiences designed to create a dialog and spark curiosity through physical and digital feedback. She describes her work as sitting at the intersection between humans and environments; physical and digital; sensuality and systems; textures and motions.

Nathan Ladd, Assistant Curator at the Tate in London, talked about Legarnisson, saying, “Elyne’s work raises challenging questions about the habitual nature of how our bodies move in space. As the installation provokes to break habitual movement patterns, it manifests our new bodily movements in a visually powerful digital rendering. This forces participants to be curious and explore.”

To understand how this experience could change other arts such as theater, VRScout reached out to immersive theater creator and event producer, Nicole Coady, whose work has been produced by New Line Cinema and 20th Century Fox, to get her thoughts on Legarnisson’s work on (un)Balance. “With so many mourning the loss of immersive theater and experiences during Covid, this is a fabulous opportunity to dive into another world,” said Coady; adding, “We are all stuck to our screens, and getting our bodies engaged and moving can only be positive.”

To create (un)Balance, Legarnisson worked at the Interactive Architecture Lab in London, where it was completed in 2019 under the supervision of FIona Zisch, Alexander Whitley, Phoenix Perry, and George Adamopoulos.

Legernisson used Unity3D as the platform for the VR component. For the film that accompanies (un)Balance, Legernisson turned to dancer Tia Hockey to provide movements that would be captured through a suit designed by Farid Akmal. (un)Balance was exhibited at the Ars Electronica festival in 2019 and is currently on show at the Gazelli Art House. You can learn more about the work of Elyne Legarnisson here.