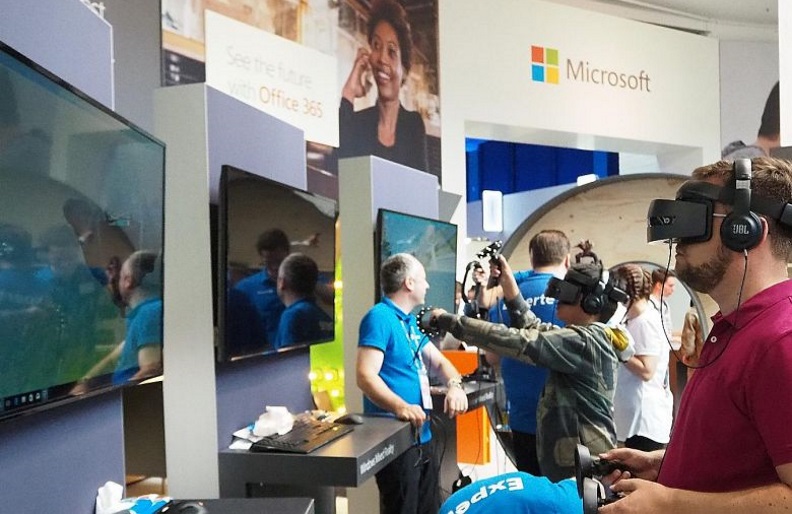 Windows Mixed Reality is Microsoft’s take on the combination of augmented reality and virtual reality.

At this year’s six-day show, which started last Friday, the software giant shared its vision of Windows Mixed Reality, which will be included in the upcoming Windows 10 Fall Creators Update available from Oct 17.

Windows Mixed Reality is Microsoft’s take on the combination of augmented reality (AR) and virtual reality (VR). It uses VR-like headsets but with front-facing cameras. So what the user sees is either real surroundings shot on those cameras mixed with virtual objects or virtual surroundings mixed with real objects.

Microsoft is partnering HP, Dell, Acer and Lenovo to launch the first Windows Mixed Reality headsets, which can be potentially applied to video gaming, entertainment, business applications and more.

“It (the Windows Mixed Reality headset) could be touted as a game changer in the sense that it is making mixed reality more reachable to the average consumer and not just gaming enthusiasts or developers,” said IDC’s associate research director Avinav Trigunait.

IDC has forecast that worldwide revenues for AR and VR will increase by 100 per cent or more over each of the next four years.

At IFA, the four Microsoft partners showed their headsets, which do not need external sensors to work, and can be plugged into even mid-range Windows PCs with the Creators Update.

Prices for the headsets start at US$399, making them more affordable than the likes of OculusVR or HTC Vive, which could cost over US$1,200 when factoring in the need for a high-end PC.

Mr Trigunait said that Microsoft’s announcement will primarily help drive mass adoption of mixed reality headsets, because of its affordability, ease of access through pairing on consumer or enterprise laptops, and exposing more consumers to mixed reality experiences by making them available on Windows 10, which is expected to reach millions of users globally.

With Samsung having launched the Galaxy Note8 phablet and Apple slated to launch its new iPhone next week, LG and Sony used IFA to unveil their latest smartphones.

LG’s flagship V30, a direct competitor to Note8, made its debut while Sony launched three smartphones, including two in the premium XZ series.

This article was originally published by The StraitsTimes.