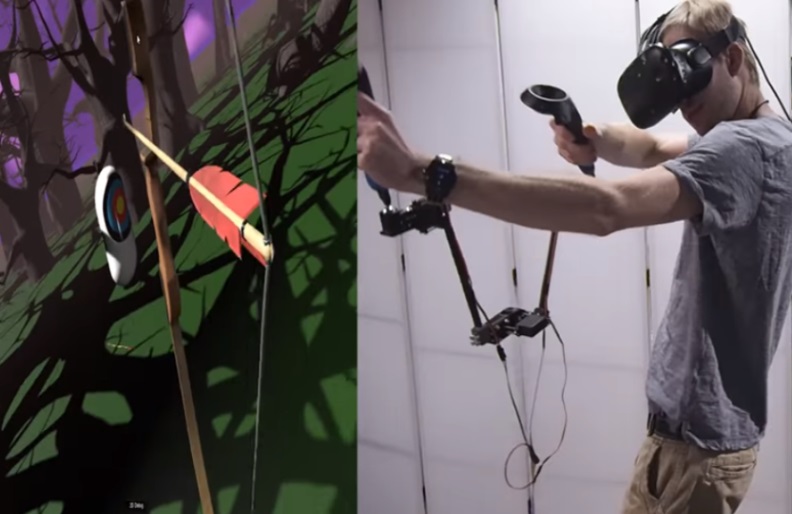 Microsoft is trying to make virtual reality a more immersive experience by enabling haptic links between VR controllers, which could, to pick a couple of examples, lead to a much more realistic implementation of the likes of rifles or bows in games.

As VR currently stands, the typical setup consists of a headset, and then a controller in each hand. However, while having individual controllers freely moving around is fine, in some situations it would be better to have those controllers linked and providing haptic feedback between both the user’s hands.

As spotted by WalkingCat, Microsoft Research is working on a system of Haptic Links, which the company describes as “electro-mechanically actuated physical connections capable of rendering variable stiffness” between a pair of handheld VR controllers.

It’s easier to explain with an example: you’re in a game, dual wielding pistols. In this case, the haptic link allows you to move both controllers completely freely about, aiming and firing your guns independently of each other.

Then you pick up a rifle. In this case, the haptic link locks both controllers into place, in-line, so it really feels like you’re holding one weapon in both your hands. Similarly, if you picked up a bow, the haptic link system can imitate the action of drawing the string back (complete with variable tension).

The video below demonstrates all this very nicely.

So, this is certainly a clever idea for developing more engaging virtual reality experiences while using a pair of simple handheld controllers (and not having to resort to a third-party peripheral to imitate, say, a rifle).

But, bear in mind this is still in the early research stages, as you can tell from the current form of the haptic link device. It’s a pretty clunky looking thing which obviously wouldn’t fly in the consumer world as is.

But maybe down the line we’ll see a more streamlined, tidier version of the concept, which not only offers haptic feedback, but is light enough not to impinge on the overall VR experience, particularly during longer sessions of usage. That would be a key consideration for obvious reasons.

As a final note, WalkingCat – who is a prolific Microsoft tipster – also spotted that the Bluetooth pairing feature which was recently introduced to the preview version of Windows 10 has been officially named.

It will be called ‘Swift Pair’, and as that name suggests, it allows for Bluetooth peripherals to be paired in dead easy fashion. All you need to do is put the Bluetooth device in pairing mode, and as long as it’s in proximity to the Windows 10 PC, you’ll be notified – and with one click the peripheral will be wirelessly connected.

This article was originally published by Tech Radar.