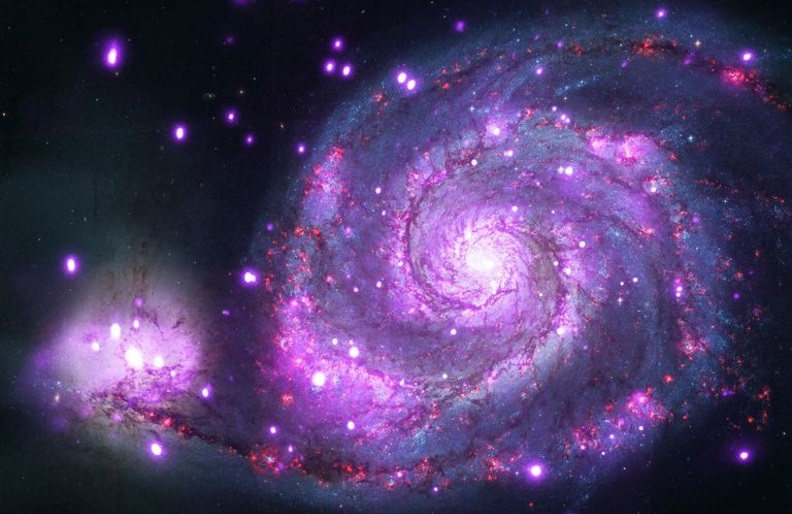 Astronomers have used data from NASA’s Chandra X-ray Observatory to capture a dramatic image of an enormous tail of hot gas stretching for more than a million light years behind a group of galaxies that is falling into the depths of an even-larger cluster of galaxies. Discoveries like this help astronomers learn about the environment and conditions under which the Universe’s biggest structures evolve.

Galaxy clusters are the largest structures in the Universe held together by gravity. While galaxy clusters can contain hundreds or even thousands of individual galaxies, the lion’s share of mass in a galaxy cluster comes from hot gas, which gives off X-rays, and unseen dark matter. How did these cosmic giants get to be so big?

This new image shows one way: the capture of galaxies as they are drawn in by the extraordinarily powerful gravity of a galaxy cluster. In the left panel, a wide-field view of the cluster, called Abell 2142, is seen. Abell 2142 contains hundreds of galaxies embedded in multi-million-degree gas detected by Chandra (purple). The center of the galaxy cluster is located in the middle of the purple emission, in the lower part of the image. Only the densest hot gas is shown here, implying that less dense gas farther away from the middle of the cluster is not depicted in the purple emission. In this composite image, the Chandra data have been combined with optical data from the Sloan Digital Sky Survey in red, green, and blue.

A bright X-ray tail located in the upper left of the image is aiming straight for Abell 2142. The right panel contains a closer view of this tail. A galaxy group containing four bright galaxies is near the “head” while the “tail” extends off to the upper left. (Galaxy groups, as defined by astronomers contain a handful to a few dozen galaxies, as opposed to much more populous galaxy clusters.) The direction of the tail and the sharp leading edge of the hot gas around the galaxy group, identified in the labeled version, shows that the group is falling almost directly towards the center of Abell 2142. A close-up view of the four bright galaxies (named G1, G3, G4 and G5) is shown as an optical and X-ray image. The galaxy G2 is a background object, rather than a member of the galaxy group.

As the group of galaxies falls into Abell 2142, some of the hot gas is stripped off, much like leaves from a tree in the fall during a strong gust of wind. As the gas gets stripped off, it forms into a straight and relatively narrow tail that extends for some 800,000 light years. The shape of the tail suggests that magnetic fields draped around it are acting like a shield to contain the gas.Beyond about a million light years, the tail flares and becomes irregular. This may mean the turbulence in the galaxy cluster’s hot gas is stronger in that area, helping to break down the effect of the magnetic shield.

The lower side of the tail flares out more than the upper side. This may be caused by a previous asymmetry in the hot gas in the galaxy group. Such an asymmetry could result from an outburst generated by a supermassive black hole in one of the galaxies in the group, or from mergers between galaxies in the group. Such events could lead to some parts of the galaxy group‘s gas being stripped more easily than others.

A paper describing the results, led by Dominique Eckert of the University of Geneva in Switzerland, appeared in the Astronomy & Astrophysics journal and is available online. NASA’s Marshall Space Flight Center in Huntsville, Alabama, manages the Chandra program for NASA’s Science Mission Directorate in Washington. The Smithsonian Astrophysical Observatory in Cambridge, Massachusetts, controls Chandra’s science and flight operations.