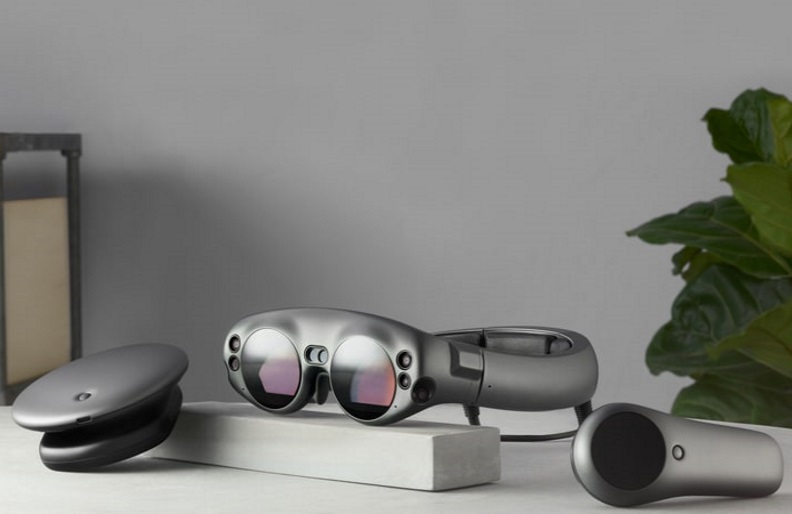 Magic Leap has finally revealed at least an iteration of the augmented reality head-mounted display they’ve been raising huge amounts of funding to create; circular goggles that aim to change the way we experience the world.

Whether they have solved the problem of vergence and accommodation, through some sort of light-field or other display technology is not clear. What is clear, is that in 2018 the AR race is on. More and more platforms will be brought to market, introducing improved inside-out tracking, increased luminance, and superior methods of displaying virtual objects in more realistic ways. So, even if the current capabilities are advancing in only small increments, the truth is we are in the nascent stages of a technological revolution. A new medium is coming into creation literally before our eyes, and it will impact how we interact with information, with machines and with each other.

But in this race to provide capabilities that that get closer and closer to human physiology, perhaps it is important that we slow down and ask why.

At the MxR Lab at USC’s Institute for Creative Technologies, we are engaged in research focusing on “point-of-need”; determining how technology can bring a human the information that is needed in a given point in time and place. This involves extensive research on how to provide levels of command and control to a user, researching and developing a “language” that will enable humans to interact with the technology in effective if not natural ways.

Sometimes what a person wants and what they need can be two different things. It is industry’s job to ship a product and tell us that the magical qualities they have are exactly what we want and will transform us and make the world a better place.

We must proceed with the conscious intention to make sure that this new medium works in support of human interaction and is not developed to replace it.

But, there is a dystopian view of the future as well. One where we are continuously connected, provided a constant stream of information that pushes past the point of convenience or support and instead drowns us in a sea of data. Swiss biologist Conrad Gessner warned us that information technology could overload our senses and be detrimental to our well-being. This was in the 16th Century and the technology he was wary of was the printing press. So, sure – we shouldn’t move forward with fear, but we must proceed with the conscious intention to make sure that this new medium works in support of human interaction and is not developed to replace it.

Research into the how and why of immersive human-computer interaction is critical and will be played out in research labs like ours, and also in the marketplace as new devices and capabilities are introduced to the public and embraced or rejected. As in all new mediums what is required is radical experimentation, much failure, vision and a leap of faith.

David Nelson is the creative director of the MxR Lab at the University of Southern California’s Institute for Creative Technologies.

This article was originally published by glixel.