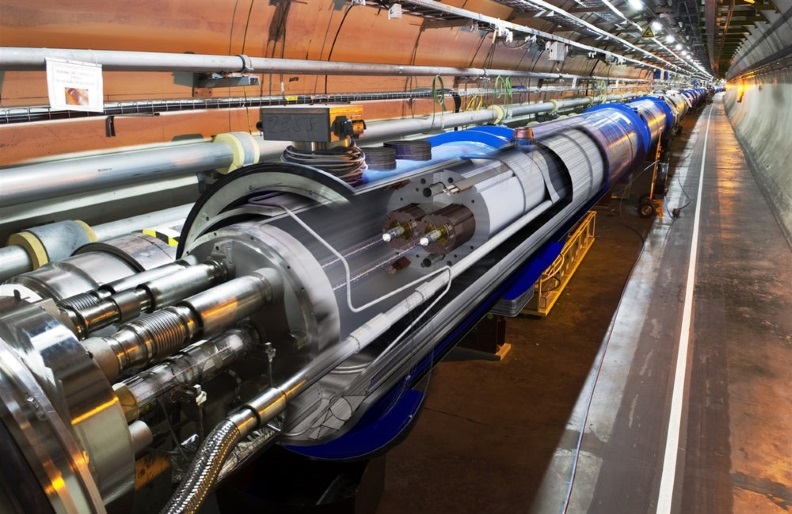 On September 10, 2008, CERN’s Large Hadron Collider (LHC) fired up for the very first time. In the decade since, the world’s largest and most powerful particle accelerator has been responsible for some of the most important breakthroughs in scientific history, most notably the discovery of the Higgs boson in 2013. New Atlas is celebrating the 10-year anniversary with a look back at the LHC’s achievements and, with a massive new upgrade in the works, what physics puzzles it could help piece together in the future.

What is the LHC?

Not only is the Large Hadron Collider the world’s largest particle accelerator, it’s the world’s largest machine, full-stop. That’s thanks to a 27-km-long (16.7-mi) ring of pipes that house the particle beams, along with thousands of powerful magnets and an advanced cooling system of liquid helium.

The ring is made up of two separate tubes, with high-energy particle beams circling in opposite directions. Superconducting electromagnets accelerate the particles almost to the speed of light, and for those to work they need to be kept extremely cold: -271.3° C (-456.3° F) to be exact, which is colder than outer space. That’s where the liquid helium comes in, chosen because it’s the only known element to remain in a liquid form at such low temperatures.

Once those particles are whizzing around at incredible speeds, it’s time for the main show. At four locations around the accelerator ring, the beams can be directed to cross paths. Just before they do, yet more magnets focus the beams into even finer points to increase the chances of head-on collisions between particles from the two beams.

When those particles collide, they produce a shower of other particles, including particularly exotic ones that are normally hard to come by here on Earth or at this point in time. To watch the results of these collisions, particle detectors are set up at each of these four spots, identifying the short-lived new particles by measuring their path, their energy loss, their velocity and mass.

What can the LHC teach us?

By smashing particles into each other, we can learn the answers to some pretty fundamental questions about the universe.

For instance, our current understanding of the Standard Model of particle physics says that quarks and leptons are the smallest components of matter. But we’ve thought this before – after all, the word “atom” comes from a Greek word that means indivisible. And yet it was discovered in the early 20th century that atoms are made up of even smaller elementary particles. In the 60s, these were again found to be composed of quarks and leptons. The LHC could help us figure out whether or not the rabbit hole goes deeper, with even tinier particles.

Other puzzles the collider could help us decipher include why there’s so little antimatter in the universe, whether there are extra dimensions tucked away on tiny scales, and the identity of the mysterious dark matter, which seems to make up some 80 percent of all matter.

As mentioned, the Large Hadron Collider booted up for the first time on September 10, 2008, successfully circulating protons around the machine. Unfortunately, it suffered a major malfunction just nine days later and required more than a year of repairs, with its first proton collisions not taking place until November 2009.

It didn’t take long after that for the discoveries to begin pouring in. The following year the LHC scientific team smashed lead nuclei together to create a quark-gluon plasma, the form of matter that the whole universe would have taken in the very first moments after the Big Bang. In this hot, sticky state, subatomic particles melt into free-flowing quarks and gluons, before recondensing into a whole range of normal matter. The LHC team wasn’t the first to create a quark-gluon plasma, but they did discover that at high energies, it behaves more like a low-viscosity fluid than a gas, as was expected.

In 2011 the LHC discovered its first new particle. Named chi b(3P), the particle is made up of a bottom (or beauty) quark and its antiquark bound together relatively loosely. Just last year, the LHC turned up another long-theorized particle containing two heavy charm quarks and given the utterly-unpronounceable title of Ξcc++(Xicc++).

But by far the crowning achievement of the Large Hadron Collider’s first 10 years was the discovery of the Higgs boson. The final particle left to fill out the Standard Model, the Higgs boson gives other fundamental particles their mass, and hunting down this elusive beast was one of the main goals of the LHC project.

The boson is named after Peter Higgs, one of the physicists who first proposed its existence. Before the 1960s, the Standard Model had a pretty major hole in it – namely, there was no explanation for how fundamental particles gained mass. To fill the gap, scientists suggested the presence of an all-pervasive “Higgs field” made up of Higgs bosons. Basically, as fundamental particles interact with this Higgs field they slow down, thereby gaining mass.

Observing a Higgs boson was seen as a Holy Grail of particle physics, and over decades experiments narrowed down the possible range of masses such a particle could have. Originally, the window was extremely wide, covering a range from 18 MeV (mega electronvolts) to more than 100 GeV (giga electronvolts).

After previous particle colliders failed to find it, scientists revised its mass to be higher than 114 GeV, while the Standard Model suggested it couldn’t be heavier than about 800 GeV. The early years of the LHC whittled that range down even tighter, to between 116 and 130 GeV.

Finally, in 2012 the fingerprint of an exciting new particle was sifted out of data gathered at two of the LHC’s detectors. With a mass of about 125 GeV, it fell right in the expected Higgs range, and exhibited other properties that lined up with predictions by the Standard Model. Still, the scientists were initially cautious about the announcement, calling it a “Higgs-like boson.”

Further examination of the new particle confirmed its identity as the long-sought Higgs boson. The achievement earned physicists Francois Englert and Peter Higgs, who proposed the concept, the 2013 Nobel Prize in Physics.

In the years after the discovery, researchers found that all measurements of the Higgs boson agree with the predictions of the Standard Model, including its spin, parity and interactions with other particles.

“With such a result and the flow of new data at the new energy level at the LHC, we are in a good position to look at the Higgs boson from every possible angle,” Tiziano Camporesi, spokesperson for the CMS detector team, said in 2015.

Just a few months ago, LHC scientists reported observing the Higgs decay into a bottom quark and its antiquark, which the Standard Model says should happen about 58 percent of the time.

Confirming the existence of the Higgs boson was just the beginning. CERN scientists say that the particle is a powerful new tool for testing the limits of the Standard Model.

Progress isn’t made by standing still, and back in June this year ground was broken on a powerful new upgrade dubbed the High-Luminosity Large Hadron Collider (HL-LHC). New tunnels will need to be excavated, new buildings constructed, and over 1.2 km (0.7 mi) of the existing machine will need to be replaced.

The upgrade includes adding new magnets to squeeze the particle beam even thinner at the interaction points and boost the chances of collisions. Efficiency will be improved as well, and some equipment will be moved so it’s easier for maintenance crews to reach when they need to.

During most of the works, the LHC will continue to operate, but there will be long periods of downtime. It’ll all be worth it in the end though: when the HL-LHC boots up in 2026, it will be up to seven times more powerful than it is today, performing a dizzying seven billion particle collisions per second. That should make it capable of collecting 10 times more data in the 10 years after that.

That extra power will be put to work examining the Higgs boson more closely, as well as investigating physics beyond the Standard Model and looking for the answers to some of the most profound questions in modern science.

Are there particles smaller than quarks and leptons? Does every particle have a supersymmetrical partner particle? Does gravity operate, in part, in other dimensions? And could the more powerful collider finally produce particles of the ever-elusive dark matter?

Given the incredible breakthroughs we’ve seen in the Large Hadron Collider’s first decade of operation, we can’t wait to see what its souped-up future brings.