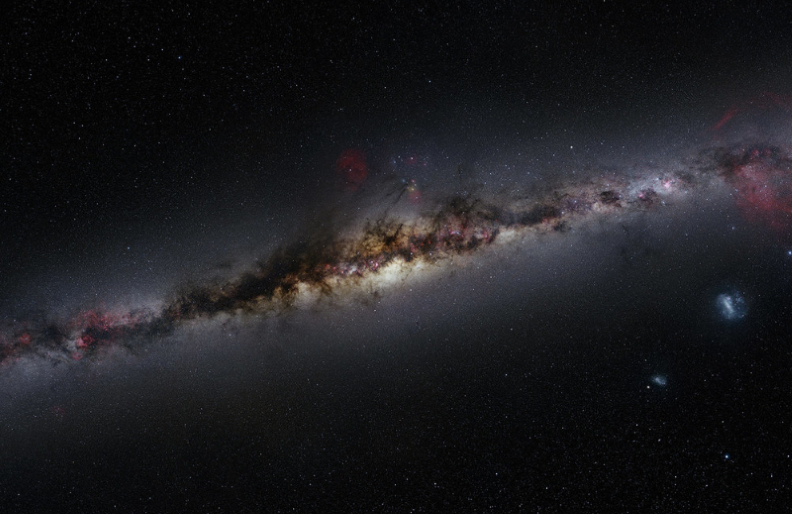 The disk of our home galaxy – the Milky Way – is bigger than we previously thought. A new study shows it would take 200,000 years for a spaceship traveling at the speed of light to go across the entire galaxy.

Researchers made the find after analyzing the abundances of metals (heavy elements) in stars, also known as their metallicities. When looking beyond the previously assumed boundary of the Milky Way’s disk, scientists were surprised to see stars with compositions resembling those of disk stars. [Amazing Photos of Our Milky Way Galaxy]

“We have shown that there is an appreciable fraction of stars with higher metallicity, characteristic of disc stars, further out than the previously assumed limit on the radius of the galaxy disc,” study co-author Carlos Allende, a researcher at Astrophysics Institute of the Canary Islands (Instituto de Astrofisica de Canarias, said in a statement.

To put the find in perspective with the location of our own sun, astronomers said the newly found disk stars are about three times farther from the galaxy center than the sun. It’s possible there could be even more disk stars about four times farther away, the team added in the statement.

Researchers made the find after analyzing survey data from the Apache Point Observatory Galactic Evolution Experiment (APOGEE) and the Large Sky Area Multi-Object Fiber Spectroscopic Telescope (LAMOST), which collect the spectra of stars. A star’s spectrum is the breakdown of its light into different colors. By analyzing the pattern of colors, scientists learn what elements are present within the star.

It’s not the first time scientists have revised a galaxy’s parameters. A recent study of the Andromeda galaxy revealed that the celestial body is actually about the same mass as the Milky Way, instead of larger. This affects predictions of the two galaxies’ motions as they head for an inevitable crash in 4 billion years.

The new study was published in the journal Astronomy & Astrophysics and led by Martin Lopez-Corredoira, a researcher at IAC.