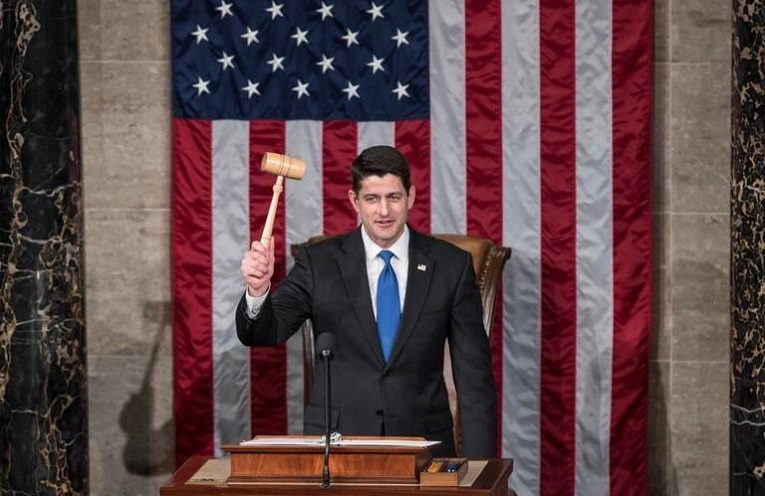 House Republicans narrowly approved a controversial plan to dismantle the Affordable Care Act on Thursday, taking a significant first step toward fulfilling a seven-year promise to repeal and replace the 2010 law that served as a landmark overhaul of the US health care system.

Republicans passed the American Health Care Act with one vote to spare, following a dramatic series of negotiations that exposed deep fissures between the party’s moderate and conservative wings over how to replace Barack Obama’s signature legislative accomplishment.

The bill passed 217 to 213, with 20 Republicans voting against and no Democrats voting in favor.

Republicans burst into applause when the bill passed the 216-vote threshold, a feat that had seemed insurmountable just days before. Democrats too saw a reason for celebrating. After it passed, they sang the 60s hit Na Na Hey Hey (Kiss Him Goodbye) – appearing to suggest Republicans would lose their seats if the repeal proved unpopular.

The bill now moves to the Senate, where it is expected to face serious difficulties.

Donald Trump announced that he planned to celebrate with Republicans in the rose garden at the White House. Before the vote took place, the president tweeted: “If victorious, Republicans will be having a big press conference at the beautiful Rose Garden of the White House immediately after vote!”

It will be a very different spectacle from the first attempt to pass the healthcare bill in March, which ended with a crestfallen House Speaker Paul Ryan admitting to reporters on Capitol Hill that moving from opposition to governing comes with “growing pains”.

But faced with mounting pressure from Trump and a White House eagerly searching for a victory of its own, Republicans managed to coalesce around a flagging plan that just six weeks ago was considered all but dead.

As the president approached his 100th day in office without a single legislative victory to his name, the White House escalated its push on Republicans to revive the effort to repeal Obamacare, a significant campaign promise. Behind the scenes, New Jersey congressman Tom MacArthur, a moderate, teamed up with North Carolina congressman Mark Meadows, chairman of the arch-conservative Freedom Caucus, to hammer out a compromise they believed would bridge the ideological divide within the Republican party.

Ahead of the vote, members took turns delivering impassioned speeches from the chamber floor, drawing rare applause and cheers for what is more often staid debate.

“A lot of us have been waiting seven years to cast this vote,” said Ryan, imploring his party to make good on their promise to repeal the ACA. “Many of us are here because we pledge to cast this very vote: to repeal and replace Obamacare, to rescue people from this collapsing law.”

As Ryan finished, Republicans rose to their feet, chanting “Vote! Vote! Vote!” Democrats countered: “Where’s the score?” a reference to Ryan’s decision to vote on the bill without knowing how it will impact voters.

“Most Americans don’t know who their member of congress is,” Democratic House minority leader Nancy Pelosi said. “But they will now when they find out that you voted to take away their healthcare.”

“You,” Pelosi said, singling out moderate Republicans, “have every provision of this bill tattooed on your forehead. You will glow in the dark on this one.”

“To have a healthcare bill that throws 24 million people off insurance – you should be ashamed,” Democrat Jim McGovern, a Massachusetts congressman, said in rebuke to Republicans.

But Doug Collins, a Republican congressman from Georgia, said: “For seven years the American people have said: ‘No. Stop it. We don’t want a healthcare system from government.’ It takes freedom away from us.”

The revised healthcare bill was immediately mired in controversy, as Democrats vowed to wage the upcoming 2018 midterms over the legacy of Obamacare and its expansion of coverage to millions of Americans.

The Republican plan has drawn particular scrutiny for gutting coverage for people with preexisting medical conditions. Prior to the passage of Obama’s healthcare law, insurers were able to deny coverage to people who were already sick and whose treatment was more expensive – but Obamacare barred insurers from continuing to do so.

The Republican-passed bill would allow states to opt out of coverage for preexisting conditions, a move conservatives argue would lower overall premiums by removing sick people from the market. But it would once again enable insurers to charge those with such conditions more and price those individuals out of insurance.

To attract support from moderate Republicans who balked at the plan, an additional $8bn was included over five years to fund so-called high-risk pools for people with preexisting conditions. But states with waivers to opt out of the protections under the ACA would not be required to set up such pools, and health policy experts have argued the fix is insufficient.

At least one analysis, from the left-leaning Center for American Progress, found the Republican plan would fall woefully short in providing coverage to individuals with preexisting conditions. An estimated 27% of Americans under 65 have preexisting conditions, which include chronic illnesses such as cancer, heart disease and diabetes, that were not covered prior to the ACA.

Drawing even more attention to the debate was a 13-minute monologue by comedian Jimmy Kimmel at the start of his late-night talk show on Monday, in which he relayed in emotional terms the story of his newborn son’s heart condition. The viral clip prompted a response from Obama, who tweeted: “That’s exactly why we fought so hard for the ACA, and why we need to protect it for kids like Billy.”

The Republican healthcare plan also includes an attempt to defund women’s health organization Planned Parenthood, as well as drastic cuts to Medicaid, totaling $370bn over a decade. A broader portrait of the bill’s potential consequences was unclear, because Republicans rushed a vote before the independent Congressional Budget Office (CBO) could provide an analysis. The CBO had projected that under the original version of the Republican plan, as many as 24 million Americans would lose their health insurance.

While Republican lawmakers acknowledged they would prefer to first see a score from the CBO, most resigned themselves to instead favor the passage of a bill they could tout as an progress toward repealing and replacing the ACA.

It was an almost stunning about-face for a party that for years railed against Democrats for what they said was a rushed, backroom process to pass the ACA in 2010. (The debate over the legislation was actually far more protracted than characterized.) The latest version of the Republican bill, the text of which was still evolving overnight, was not posted until late Wednesday night – less than 24 hours before the vote.

House speaker Ryan had refused to commit to a timetable until he was certain he had the votes to pass the bill. But a Thursday deadline loomed as the House was scheduled to recess until 16 May, leaving a possibility that Republicans might waver in their support after hearing from constituents opposed to the unpopular legislation.

Meadows, who long railed against the way Democrats passed Obamacare, pushed back on accusations that Republicans were being hypocritical in the way they rushed their healthcare bill.

In the Senate’s hands

Whether Republicans’ seven-year mission to dismantle the ACA comes to fruition now lands squarely in the hands of the Senate.

Faced with a far more narrow majority in the upper chamber, Republicans plan to use a process known as budget reconciliation that would allow them to avoid a Democratic-led filibuster and pass a bill with a simple 51-majority vote. But the rules of that process pose their own hurdles, as they limit the scope of what can be passed through reconciliation to spending, taxes or the deficit. The House-passed bill would thus need to undergo substantial changes.

Republicans in the Senate signaled they were in no hurry to advance a healthcare bill.

“My guess is we’re going to spend at least a month looking at the issue, making sure that it passes the test of time,” Republican senator Bob Corker of Tennessee told MSNBC.

House Republicans said they expected the Senate to make changes to the legislation, with the goal of ultimately improving it. But that would tee up another vote in the House on its final passage and potentially reopen the chasm between the GOP’s moderates and its right flank.

Democratic Joe Manchin, a senator from West Virginia facing a tough re-election battle next year, made clear Republicans were on their own as they eyed next steps.

“I can’t say [the Republican bill] is dead on arrival,” he told Politico Playbook in an interview.